Luisa is the senior sales representative and Dan is president at Greystone Masonry, the company they founded 18 years ago. The Dittmanns have enjoyed a high level of success, doing a lot of work for increasingly sophisticated homeowners and for the many government facilities in their region of the country. Much of that success, they say, came from an early opportunity 16 years ago to enter into the decorative concrete fray that they said “yes” to after another contractor said “no.”

Turning the negative into a positive
“We do a lot of work for builders and at that time a builder had a customer that wanted stamped concrete,” says Luisa, 42. “They approached us, we took a chance and it came out really nice.”

Dan, 55, says he’s been into concrete and just always liked it. That job 16 years ago was spec’d for stamped concrete, at a time when it was still very new to the market. Dan says he called some local guys and told them he would prep for the work if they would stamp it. They said no. He then said he’d pour it if they didn’t have the manpower, but he needed it stamped. They still said no.

“Then I found a couple guys in the phone book and one guy wasn’t interested and the other guy didn’t have a stamp,” says Dan. “I said, ‘How about I get you the stamp?’” He said no. Dan found another guy who promised to do the job in a couple of weeks, then he too backed out. “So we did it ourselves,” he says. “There was really nobody else that did much of anything decorative until we came along. I guess nobody in the area wanted to do it. We knew it was an up-and-coming thing. We had been to seminars by Increte and Stampcrete and everybody was saying it was on an upward swing. We knew then which way we wanted to take the company.”

A concrete direction
Greystone originally did many forms of concrete work, including foundations and walls. The first year after taking the stamping plunge they did half a dozen decorative jobs. By the third year they installed 300 jobs. By the fifth year they had dropped all other business to focus completely on stamping.

Now, aside from their government and commercial work, Greystone specializes in outdoor living spaces. “Patio areas, front entrances, porches, walkways, driveways, decorative seating walls, fireplaces… ,” says Luisa. “People are taking their indoor living outdoors and they want the same comfort they have inside. The possibilities, the potential, are endless because everybody’s backyard is different. Every single day you start with a new canvas and the end result is always very rewarding. It’s a very exciting job.”

Luisa estimates they install up to 500 projects yearly. However, it often rains and the ground freezes, so that work is squeezed into eight months out of the year. They don’t rest on their laurels in the wintertime, though. The Dittmanns also have a snow removal business that generates a lot of calls.

Delivering what customers want
Luisa says a few memorable projects have come about because homeowners kept adding on things they wanted to do. “One started with a pool deck and then the customer decided to do additional seating walls and custom precast steps. Then he added a fireplace and garden walls and a pavilion,” she says of the job that kept them busy for half a year. “He was just so pleased with everything. As we were about to complete something and get out of there he was like, ‘What else can I do?’”

Luisa says their most popular pattern is an Ashlar Slate stamp by Matcrete. “That and flagstone patterns are by far my two most requested patterns,” she says.

Dan has overseen large projects for the Marine Corps University, the Officer Candidate School, a mess hall and courtyards at the FBI Academy, including a 10-foot-wide FBI logo. They completed a 20,000-square-foot stamped courtyard for the Fairfax County Public Safety Building. Though these are significant jobs, the Dittmanns are prohibited from photographing much of their work on these projects, because they are in secured government facilities.

Greystone Masonry has a 4,000-square-foot outdoor showroom with more than 80 varieties of stamps from which to choose. Dan recalls that a high-ranking Marine official visited their showroom to select a stamp. “He wanted a certain stamp with a certain texture and nobody made that,” Dan says, “so we went to Matcrete and had them make a prototype of a Royal Ashlar pattern in a larger size, and we were awarded the contract.”

They completed that 20,000-square-foot job in an outdoor area at the Marine Corps University in October 2014 using a color hardener by L. M. Scofield Co. and a clear liquid release. He says it was a challenging job because they could only pour a certain amount at a time and they had to work around a plethora of dowels, expansion joints and control joints.

“We poured over three weeks,” he says. “Some of it was traffic rated and needed 18 inches of gravel base on 7 inches of concrete and part of it was just 4 inches of concrete.” They used an antiquing agent called EZ-Tique by Proline for a uniform appearance and sealed it with two coats of a Scofield sealer.

Clearly a winner
Greystone Masonry has won many awards and has been featured in many construction magazines. It received 2012 and 2014 ASCC Project Awards first-place honors along with a first-place 2009 Concrete Pavement Award through Concrete Products magazine.

The company now has 50 employees and four production crews that handle specific jobs, such as strictly patios or driveways. They have three dedicated crews that only handle power-washing and reseals.

“We have a couple of masonry crews that do the decorative sitting walls and things like that,” says Dan. “In our organization everybody has their specialty. A carpenter will be a carpenter and a mason will be a mason. Between our office staff and our talented field crews, we’re like a well-oiled machine.” 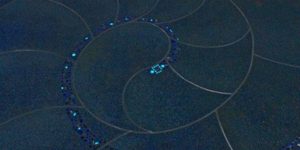 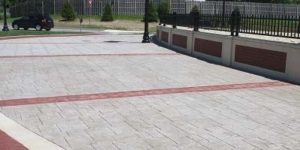 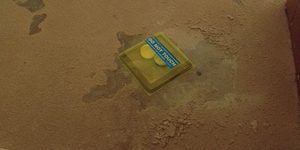