In his heyday, Michael Archambault was more than a casual contender. Back in the ’70s, before he was 25 years old, the sassy lad who grew up in San Diego had Houston by its concrete tail. He not only owned a Patterned Concrete Industries franchise but eventually bought out the mother company and served as president. Archambault also sat on the board of the American Society of Concrete Construction and was very involved with the American Concrete Institute, serving on four different committees.

Yes, he was in the mix, caught up in the business, smack dab in the thick of things, he recalls.

“I worked decorative concrete [in that capacity] from 1977 until 1995,” he says. But success had its price. Twice divorced, he finally figured out the source of his woes: He just wasn’t cut out to run a big company. “It took its toll mentally on me,” he says. So he did what most red-blooded Americans would do in his situation. He sold his shares of both Patterned Concrete of Houston and Patterned Concrete Industries and bailed.

Luckily, there was a parachute within reach.

Opportunities abroad
Right about that time, Archambault got a call for help from a contractor in England. “I decided to go for it,” he says, which meant he spent the next couple of years shuttling between Houston and the UK.

“Then I got a call to come to France,” he says. The job involved helping with a project at Disneyland Resort Paris, where he had previously worked in 1991 and loved every minute. Working on the Disney project “opened huge doors” for him, he recalls, and before too long, L.M. Scofield Co., whose products he has always used, offered him a three-year contract as a consultant. Their relationship continues today.

Archambault moved to France in 1998, remarried and today lives about 10 minutes from the Disney resort with his French wife and their 3-year-old daughter.

For the past seven years or so, he has been teaching people all over the world how to work with decorative flatwork and colored concrete. Largely through the agreement with Scofield, he has trained crews throughout Europe, Africa and Asia.

Archambault says his years in Texas working with Mexican crews helped prepare him for his current job. “I’ve always had a knack for teaching,” he says. “And I can teach the basics of concrete finishing to other people even though I don’t speak their language.”

To the finish
Archambault contends that the success of any project — decorative or not — depends largely on how the concrete is put down in the first place. “A lot of people want to enter the concrete market by going directly into the decorative aspect,” he says. “But most anybody can stamp concrete. There’s a lot more to placing concrete and finishing it.”

Many contractors who live in countries where concrete has not been widely used are impressed by things that most American and Australian contractors consider run of the mill — like integral color, broomed or swirled finishes, smooth edges and banded work. In these countries, stone has been used for exterior applications because it’s always been so plentiful. But rock from quarries is becoming more expensive, as is insurance and labor, Archambault explains, and alternatives are being sought.

“The concrete people over here can put down an inside industrial floor fine, but you take that same company and they struggle with outside applications,” Archambault says, noting that contractors are used to pouring a base and putting something on top of it, rather than finishing it to look good. “They lack the basic knowledge necessary for a durable and lasting finish,” he says. “They don’t understand that fluctuations in temperature can cause concrete to crack if the joints aren’t properly placed or if there aren’t enough of them.”

Often, the seemingly simple things are the most complex, Archambault continues. “To the day I die, the most difficult thing [to teach] is running an edge and keeping them flat. I know it sounds so very basic and boring, but teaching a guy how to edge, float and trowel is extremely difficult.”

Architects and engineers don’t appreciate that part of the business, he says. “They think stamped concrete is the bee’s knees. But prepping for the stamp, that’s where the talent lies.” 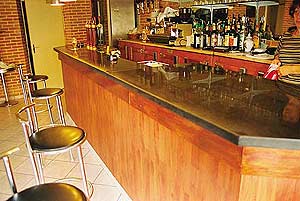 Some guys think that by the end of one class, they’ll be experts, he says. But he figures it takes about 10 years. “It takes an incredible amount of time to learn everything you need to know to place concrete,” he says, “and I don’t think you can do it in less than that.”

Tricks of the trade
Archambault says that one of his most reliable teaching tools is plain, ordinary sand. He first learned about practicing with sand back in 1974 during a summer job in Kansas when he was a tool washer who longed to be a finisher.

“My boss said if I wanted to finish concrete, I should go over to that sand pile and practice.” That’s what he did and that’s what he still preaches today.

“By using moist sand, you can really go into depth with the students without having to rush,” he says. Sand also gives the student the freedom to make bad errors that are easily fixed, he says.

“From the straight edge to the bull float — essentially all your hand tools — using these tools in sand is very similar to concrete,” he explains. You can use sand for practically everything: fresno trowels, walking edgers, walking groovers, troweling, applying release and stamping. 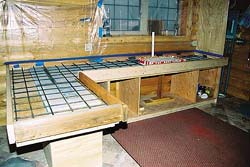 He recalls using this technique in Egypt with two groups of 40 people in preparation for two large decorative concrete jobs, the Dream Park theme park in Cairo and the presidential palace in Alexandria. He had three weeks to whip the crews into shape. “Half the time I used sand, not concrete, to teach with,” he says. And what may surprise readers the most: “Screeding or straight-edging took much longer for the workers to master compared to stamping.”

Hanging up the travelling shoes
These days Archambault would like to stay a little closer to home with his new family. He says he’s finally waded through the red tape and is very close to obtaining a small business license in France. His plans include working with microtoppings and cementious overlays and making concrete countertops, projects he can do without a crew.

He took a friend’s advice and bought a copy of Concrete Countertops by Fu-Tung Cheng. “It’s the best $35 I’ve spent in a long time,” he says. “It’s incredible the amount of information I got out of that book. Grinding and polishing concrete is definitely a new thrill.” 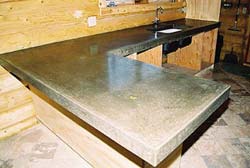 Still, he concedes, teaching still gets him excited and he doubts he’ll ever truly stay put. From the Egyptian man he coached over the phone on how to use a chemical stain to the young artist in South Africa who brought crude drawings to life, people he has taught keep him invigorated.

“I like to preach the gospel of durability,” he says. “A lot of times there is an easier way to finish the concrete, but the extra work makes the concrete more impervious. I like to do one or two more passes after what most people think is good enough.”

Above all, he urges, heed this commandment: Don’t be in the business for monetary gain. “Pay attention to the job first and satisfy the customer. Put down the most durable product and profit will come automatically.”