When you’re 22 years old, it’s hard to seriously imagine that you could be one of the founders of your own business with some friends and succeed in doing it. But that’s what happened to David Alvey back in 2000 when he was asked to help start a business called Architectural Concrete Inc. in Louisville, Kentucky, with his lifelong friend and business partner, Dillan McArthur. 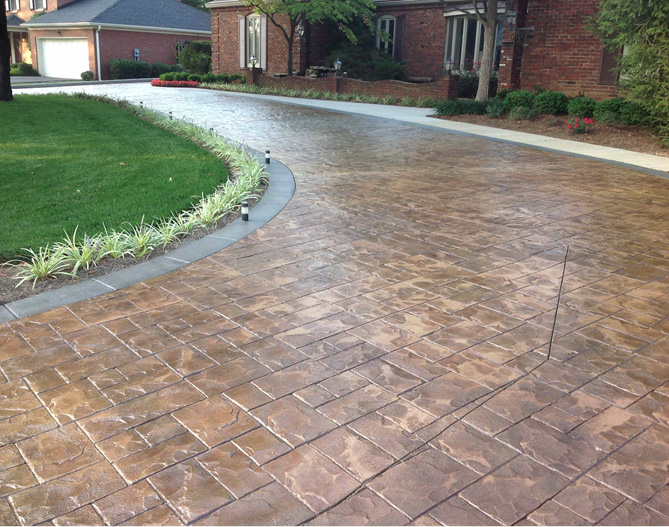 The business first started with partners Alvey, McArthur and Damon Bootes (who left a few years later to work for a family business, but since returned in 2015 to help in sales). Alvey focuses on the office management, growth and marketing side of the business while McArthur serves as the project manager and runs operations.

After Alvey graduated from Xavier University with a major in sports management and marketing, he was ready to try something new. Bootes’ cousin had a landscaping company and a couple of clients wanted to spruce up their patios. The cousin offered the work to the ACI crew, who didn’t have a lot of experience but were eager to learn. 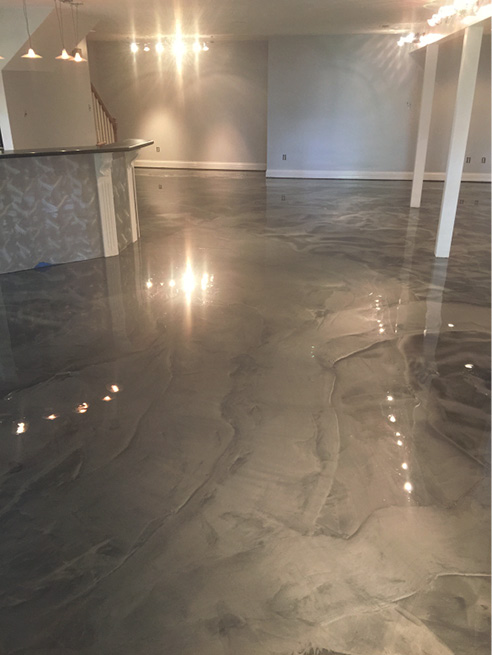 Initially, Alvey says, he thought to himself “what’s a year” in the big scheme of things and he’d eventually move on to something else. But one year progressed to two, three and then four. Before he knew it, concrete had become a way of life and the partners enjoyed the work and the success that came along with it. Bootes had moved on to the family business, roles changed and it was like starting all over again. 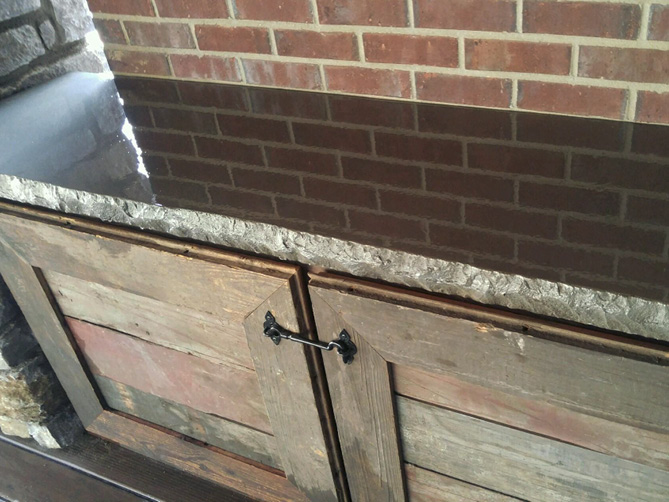 “There was kind of a no turning-back point,” says Alvey. “The time just flew by.” He says it was a “let’s see what happens” attitude that propelled both of them deeper into the concrete world.

In the beginning, Architectural Concrete started as a crew of three to four guys doing one to two jobs at a time. Fast forward to now and they’ve evolved into juggling five to 10 jobs at once with a 10- to 20-person crew. In 2008 when the economy took a nosedive, the company slowed its pace, weathered the downturn and was fortunate enough to survive until business picked back up. 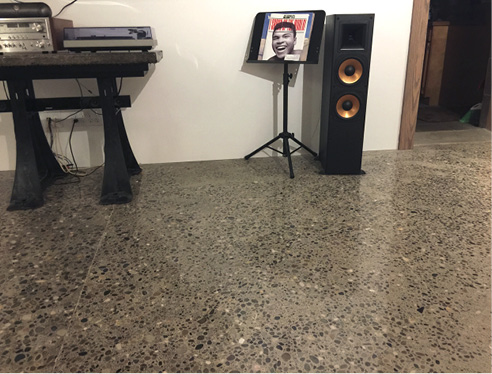 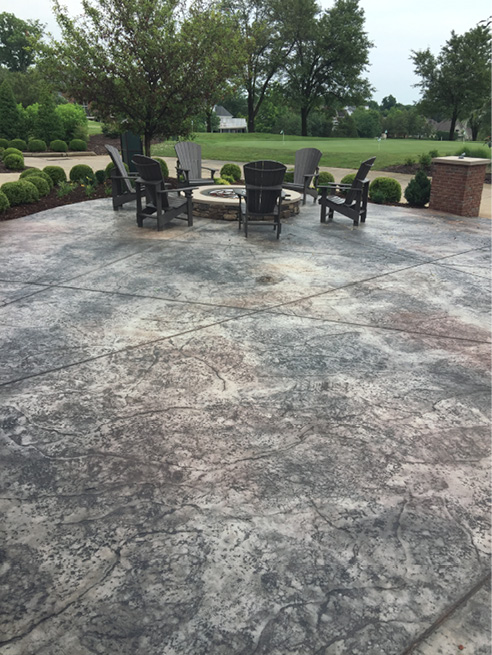 Keeping abreast with the industry

Alvey believes that being very detail oriented and hands on has set his business apart over the years. On any given day, you can spot Alvey and/or McArthur at each of the company’s job sites. As Alvey puts it, “The bosses are on the job every time,” monitoring the work performed throughout all of its stages. 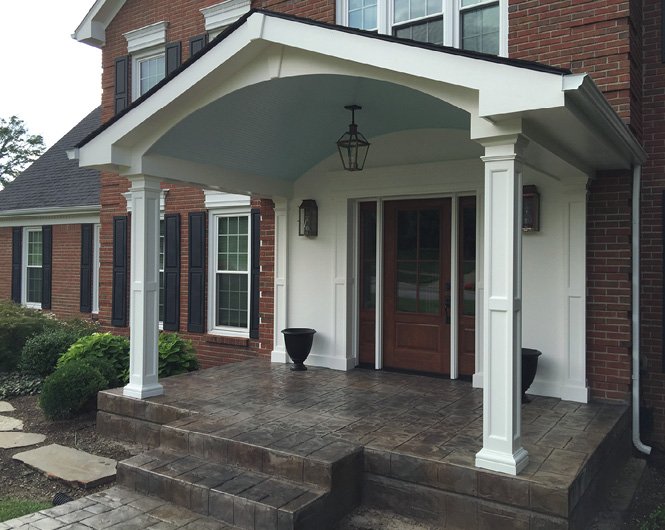 While Alvey loves to keep focus, he also greatly emphasizes teamwork and isn’t the type of person to ask his guys to do something he wouldn’t do himself. He wants his crew to enjoy coming to work, to be successful at what they do and to continue to be motivated to do their best. With a mantra of working hard for his workers, he notes his inspiration doesn’t just come from one thing. 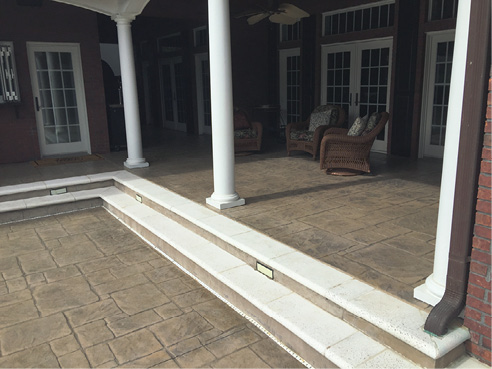 “It comes from making sure we have a successful business. Take care of your business and the business will take care of you,” says Alvey. Not only is he inspired by seeing other people succeed but he also likes to stay on top of things by going to shows, reading up on the latest trends and checking out the newest products. Always listening, reading and learning about what’s new are what keeps him on track, ahead of many others.

Outdoors projects are in

Outdoor living projects are big business for Architectural Concrete and most jobs involve either polishing or staining and stamping. Describing his work in three words, Alvey notes that it’s unique, creative and detailed. 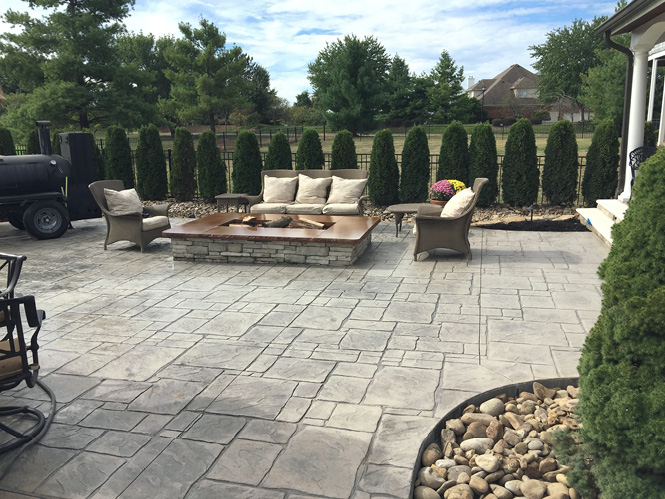 Personally, he likes to do residential work where he deals with homeowners and designs/builds a project, often improving on what’s already there. “We like to come up with a totally new outdoor living space for them to see what we can do with the old outdoor living area,” he says.

When he isn’t working, he likes hanging out with his family, watching college basketball and going to the lake on weekends. Grilling is one of his favorite things to do — hamburgers and steak to be specific.

When he thinks back on what he would be doing if he wasn’t in the concrete industry, Alvey says he’d like to be coaching basketball, a sport he used to play and coach. Recently, he’s got a little more free time and is starting to coach again with his young boys, something he did back in the day for a 10-year period.

Alvey says he has a well-rounded and busy life and is content on maintaining his business. While he doesn’t anticipate it getting any bigger anytime soon, he believes business in five years is going to be robust.

Along with a very busy schedule comes some major challenges, including retaining and recruiting good workers. Because of the shortage of manpower, at times, “It’s been hard to keep up with the work demand,” he notes.

Alvey’s advice to those coming into the business is to realize it’s hard work that often involves working seven days a week. “What you put into it is what you get out of it,” says Alvey. 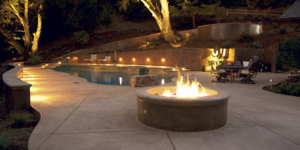 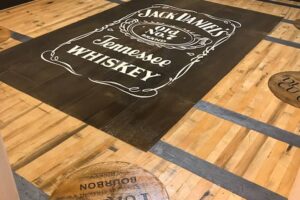 His and Hers:
Concrete floors feature a mix of whiskey and stained glass