Support for this story provided by Superabrasive, manufacturer of quality polishing and grinding equipment.

Can a new local apprenticeship program get people out from behind concrete walls and working on concrete floors? Organizers and supporters of the AMPD Initiative surely believe so, and they’re confident they can help solve the industry’s employee shortage along the way. 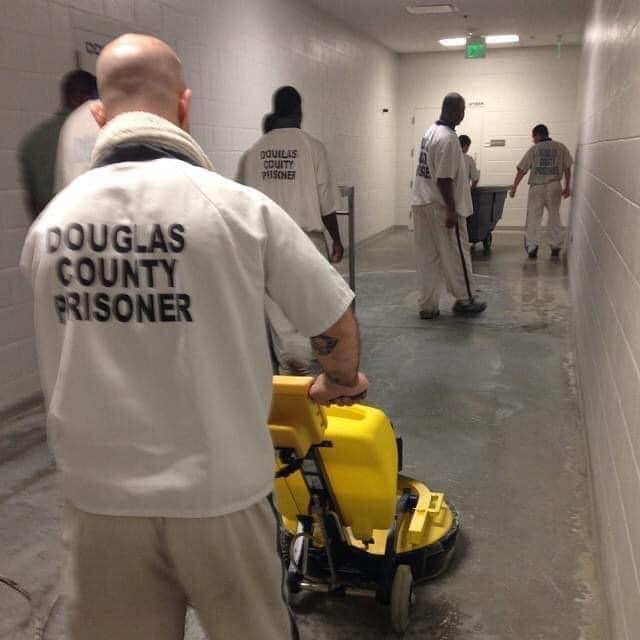 When the AMPD (apprenticeship, mentoring, professional development) Initiative convenes its first formal classes May 2, 2022, approximately 15 men and women who are veterans, ex-offenders, and others in need of a second chance will begin an eight-week course.

At the end of the training, they’ll have learned about construction safety, concrete grinding and epoxy coatings. They will also have learned about surface prep, concrete stains and polishes, restoration of terrazzo, granite, and marble, and more. Also included are life skills such as anger management, how to open a bank account, and budgeting.

The visionary behind AMPD

Terry Jacobs, one of the visionaries behind the AMPD Initiative, is the owner of T&T Ventures LLC, and as such is both an ex-offender and a successful minority business owner. The idea behind the program is based on how he overcame his own life challenges and then put his ideas to work training other ex-offenders.

“All the manufacturers that I work with know my story and know how I take these guys and turn them into success stories by loving and respecting them and getting them the right tools,” Jacobs says. “I tell them all that I’m going to give them the tools, but they have to earn it.”

Tanya Wallace, executive director of AMPD and an experienced educator, has been collaborating with Jacobs for about six years now to help him train ex-offenders. About 90 percent of T&T’s employees fall into that category.

“Terry has been simulating what we’re going to be doing now with training and putting them to work in the field of construction with a concentration on flooring,” she explains.

Wallace describes the experience as being “very rewarding” but says the one thing AMPD has lacked is any formal recognition as an approved training program. One of her jobs in recent months has been directing efforts to get that designation.

Approval came early this year from the U.S. Department of Labor’s Office of Apprenticeship, which designated AMPD as a registered apprenticeship program. It is also designated as a tax-exempt 501(C)(3) program by the Internal Revenue Service.

“I developed the blueprint for the training and apprenticeship program,” Wallace says. “And we’ve pulled in all our national sponsors and vendors that we work with to involve them in the training because when they leave us, we want them to be multi-faceted. In the state of Georgia, we’re the only construction apprenticeship program available to this targeted population.”

One particularly enthusiastic volunteer is Eric Witcher, southeast outside salesperson for Gran Quartz. Witcher has had his own experiences working with the inmate population. He says it began a few years ago when he took a call from a local county jail.

“They wanted to polish their own concrete in-house,” Witcher explains. “I would normally refer them to a contractor, but I went ahead and sold them the equipment, and agreed to train a few inmates on how to use it. I make a living training people how to run my equipment, but I remember walking away from there thinking how remarkable they were. They all were good listeners, and they had plenty of time.”

More recently, he had a similar experience at the U.S. Penitentiary, Atlanta. However, one of his trainees, at the end of his sentence, contacted Witcher after his release. Witcher then contacted a contractor and was able to get the two together. Then the ex-offender was hired.

“They’ll earn an hourly wage during training,” say Witcher of the AMPD program. “Once they finish, we’ll assist them with job placement. We’re already getting contractors who are willing to participate, just as we’ve got a lot of manufacturers who are participating as far as donations.”

Gran Quartz is only one of several companies donating supplies and equipment, and the training will take place in a 60,000-quare-foot facility donated by a church in Decatur, Ga. Witcher will teach the sessions on polished concrete and marble and granite restoration and maintenance. 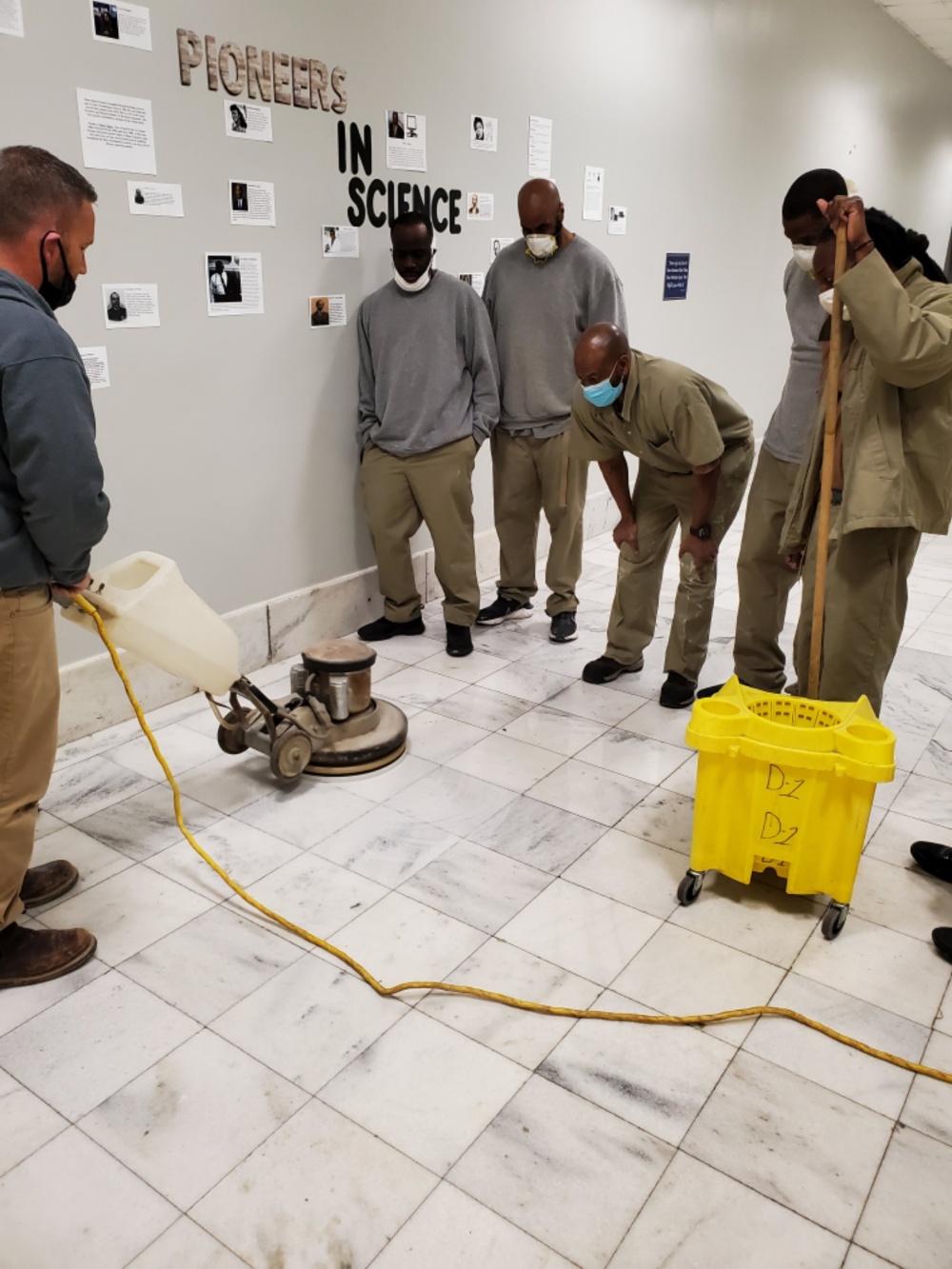 “Tanya and Eric have been very instrumental, along with the other partners, in putting this together,” says Jacobs.

Many of the ex-offenders involved have had drug charges against them. They are coming to AMPD through referrals and social media. Eventually, Wallace hopes to be able to advertise the program.

“Those are the people we want to work with,” Wallace says. “We want to work with people who want a career. Like everyone else, these people need money, and this pays well. There aren’t a lot of places where you get out of prison and make from $18-$30 an hour. It just isn’t going to happen.”

Despite the good response the program has already received from people in the industry, she adds that there is certainly a need for more, particularly equipment sponsorships, since the participants will need items like work boots, knee pads, PPE, and tools.

“We’re trying to build each one of them a basic tool bag, so when they get finished, they’ll have some equipment to go out and work,” Wallace says. “When they go out on crews, they’ll have their own basic tools that are theirs and mean something to them.”

All involved hope that AMPD’s first formal class is just the beginning of something much bigger. For instance, Witcher notes that Wallace has been applying for grants to help continue the program

“We’ve had several calls from different cities who want to bring in this program,” says Wallace. “It’s going to generate a more-skilled workforce. It will also improve the overall well-being of the individual, their families, and their communities. It’s definite worthwhile work.”

And, she adds, it’s due to the vision of one man who has spent his career polishing floors and helping people who were lost.

“I want people to know it was the vision from a man who overcame a lot of obstacles,” Jacobs concludes. “If you give love and respect and stay focused, anything is possible.”

To learn more about the AMPD Initiative, see a list of donors or donate, visit www.ampdinitiative.com.