Polishing contractors take note: There may be a future in grinding and sealing concrete driveways.

Just ask Chris Paisley, president of Concrete Contracting Solutions Inc., in Columbus, Ohio, or Randy Klassen, owner of Klassen Concrete, in Winnipeg, Manitoba. Both men contend it’s a great source of revenue for polishing contractors, as well as a good way to help pay for the often hefty investment in grinders.

Paisley began working with concrete on a construction level in 2001 and started polishing in 2008. In 2010, he exited construction completely to solely focus on grinding and polishing. Klassen, who’s been working with decorative concrete since 1990, added polishing to his repertoire last winter. Just this summer, he began grinding surfaces outdoors with his new equipment, a Diamatic BMG-780PRO and a BMG-735PRO. By the end of June, Klassen had already completed 15 to 20 jobs.

Both men say they don’t know anyone else in their service areas who offers grinding and sealing as an outdoor finish option. “I would love to see more awareness and an industry acceptance of the process,” says Paisley, who uses HTC 800 and 500 grinding machines. 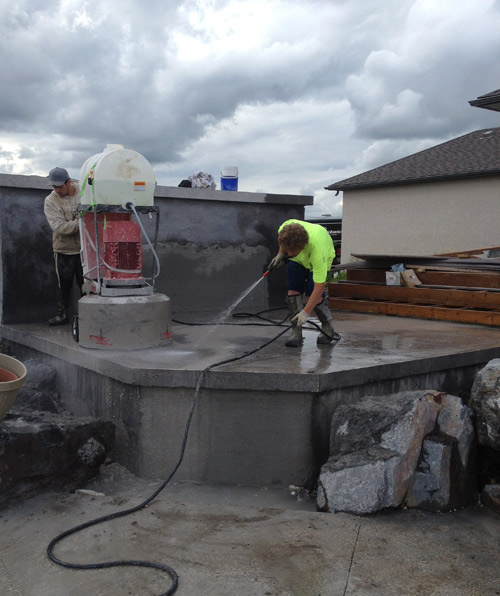 A not-so-crazy idea
Back in 2009, Paisley contemplated grinding and sealing 30,000 square feet of sidewalk around a shopping center in Naples, Fla., as a solution to the surface’s flaking problems. But after he couldn’t find any relevant projects or useful information on the topic, he withdrew his proposal.

“I got a little nervous,” he says. “I was apprehensive about whether the surface would be too slippery.”

The concept intrigued him, however, and he continued to search for more information. He thought grinding and sealing could be a good solution to Ohio’s exterior concrete scaling problem, which is common in northern areas that experience a lot of snow and ice.

So in summer 2009, he decided to experiment. He ground the delaminating surface off two driveways in Columbus and applied a sealer. “When sealed, the driveways looked like polished floors. The finish was smooth and uniform,” Paisley says. Even better, the new surface met the safety standard for walkway surfaces. It was deemed safe, wet or dry.

“Still, I wasn’t totally comfortable with the procedure,” he says, and his gut feeling proved to be true. That next spring, he got a phone call. Both driveways were failing again.

“We didn’t grind deep enough,” Paisley says. “We thought we fixed the problem, but there was still slight deterioration in some areas of the driveways where the failing surface had not been removed to the full depth.” While they had ground 1/4 inch off the surfaces in places and removed the scaling, he says they needed to grind 1/4 inch off the whole plane or the scaling would continue.

Over the course of the last three years, Paisley says, they’ve learned how to minimize problems associated with slight deteriorations in surfaces they’ve ground. For starters, they’ve generally moved away from smooth, uniform finishes, because if any deterioration takes place, it really stands out.

For skid resistance, “we run a scarifier or shotblaster to create a more aggressive profile simulating exposed aggregate concrete,” he explains. “This (process) breaks the cement paste around some of the rocks and roughens the tops to create a rough texture.” With the surface roughed up like this, slight deterioration is completely unnoticeable, he says.

This finish — which Paisley calls mechanically exposed aggregate concrete — works particularly well for surfaces such as driveways that are subject to snow or mud. “Ice and snow can settle into the lows and you’ll still get traction from the highs. It’s more like an asphalt surface.”

When it comes to outdoor residential surfaces, Klassen Concrete doesn’t just grind and polish driveways. Here the company works on a patio.
Lasting results
When driveways are older and in need of repair from scaling, Klassen says, grind-and-seal is a superior method to achieve a “cool worn look” similar to sandblasting. “On existing houses and developed areas, sandblasting is a nightmare and impossible. On new construction, it’s easier but it’s a huge mess and destroys plants and landscapes,” he says.

“By grinding, we can totally control airborne material and our waste, as well as the amount of exposure — from a light sand exposure to a full stone-terrazzo appearance.

“We grind wet and use special vacuums, which works fantastic. Before we started using the walk-behind vacuums, it was a bit of a chore to clean up.”

In addition to existing driveways, Klassen says pool decks and new driveways are excellent candidates for grinding and sealing. On new projects, “we’re pouring with colored concrete and often use specialized aggs, such as black or red granite and limestone.” He reports his company is also using acid stains and penetrating dyes on grind-and-seal jobs with successful results.

“Basically any surface can be ground as long as there’s not a lot of structural movement or slab separation,” he says.

As far as being profitable, Klassen says he can’t complain. “We can charge really good rates for doing this and are probably making a better (profit) margin on this kind of work than anything else right now. And it’s easy. You’re only going through one step instead of nine.”

Klassen says his biggest reluctance to getting into polishing was that he thought he wasn’t going to be as mobile as he wanted. “But by having all my equipment and a portable generator in one trailer, it allows me to go and grind anywhere,” he says.

Ultimately, grinding and sealing is another really good option to offer your customers. “It’s all about being different and creative,” Klassen says. And it’s a great solution for earth-conscious people who prefer to use sustainable products. “This process takes existing concrete, revitalizes it and easily gives it another 10 years of life, maybe more.”

Paisley agrees. “This method is about 40 percent to 60 percent of the cost of replacement,” he says. “And it creates a really neat decorative surface at the same time.” 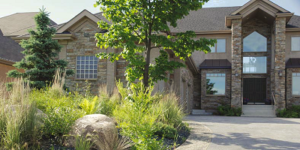 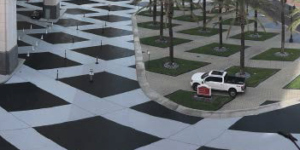 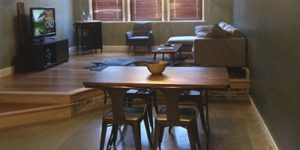 Polishing in a Second-Story Condominium