These days when one hears the term “cutting the cord” it conjures up images of severing ties with antiquated forms of communication and media like cable-TV providers and land-line telephones. Large mass communication companies like these which have made their fortunes plugging in the masses have had to modify their business models to satisfy the changing desires of today’s public.

Likewise, the construction industry has also witnessed a “purging of the plug.” In particular, polished concrete is undergoing a transformation from equipment formerly reliant on three-phase power (either 208 or 480) to pro­pane power for both grinders and vacuums.

In the beginning
Many equipment companies that were at the forefront of polished concrete 20 years ago have watched the machinery adapt and improve since the turn of the century. Around Y2K the World of Concrete in Las Vegas was lucky to see a handful of vendors peddling polished concrete equipment.

“Our first year at the World of Concrete was 1999,” says John Abra­ham­son, vice president of operations for Sase Co., one of the leading polished concrete equipment manufacturers in the country. “This year I believe there were more than 30 manufacturers of polishing equipment at the show, and there were probably double that selling different types of tooling and chemicals.”

Back in 2000, Abrahamson worked for Knoxville, Tennessee-based Vic Manufacturing, one of the first polished concrete equipment vendors in the country. Vic had cut its teeth in the marble and granite markets when Abra­ham­son and David Padgett, who was doing research and development for Vic, got involved with equipment and tooling that could be used to polish concrete.

The Vic grinders (which eventually became HTC) were coupled with Ermator vacuums from Sweden. The grinders and vacuums ran on 480 three-phase power, which in the United States isn’t as common as 208 power. So to operate, some installers who purchased this equipment had to transform 208 power from the panel to the required 480. These transformers often added thousands of dollars to the already pricey equipment.

Combustion engines preferred
Seeing a demand in the marketplace, forward-thinking people like Padgett and Abrahamson began to produce equipment running on combustion engines which burn propane. Abraham­son says this demand has been fueled mainly by specifications from big-box retailers like Target and Walmart as well as numerous grocery-store chains and home-improvement stores which have switched to polished concrete.

“The Target and Walmart specifi­cations have been the driving force,” Abrahamson says. “Any store which is doing an operational renovation requires the use of propane machines. They just can’t have the disruption to the customer the cords create.”

Walmart is open 24 hours a day and it couldn’t have all the cords on the sales floor during operational hours. Target also requires propane machines for the same reason. Although Target is not open 24 hours a day, it likes to keep the floor polishing machines more mobile with less reliance on electricity. The process for these stores often requires a demolition crew working in part of the store and polishing crews working in others.

Power struggles
Abrahamson, who left Vic to work for HTC in 2004 before ending up at Sase a few years later, says another issue for contractors is procuring proper job-site power. Crews were often running into issues where three-phase power wasn’t available.

If that was the case, they either had to purchase or rent generators which would produce the right “juice.” A generator with adequate power to run multiple grinders could cost over $50,000, while renting them could run up to $2,000 per week. Either way, installers were constantly fighting an uphill battle to procure proper power.

While Abrahamson had moved on from Vic, Padgett founded Perfect Polish, a polished concrete install company, along with a supply company, Concrete Polishing Solutions. Perfect Polish was working concurrently on multiple 100,000-­square-foot projects and Padgett quickly saw a need to come up with a better power source for the equipment than electricity.

“We were working on a car facility in Detroit that was more than 1 million square feet and we were constantly running into roadblocks when it came to getting three-phase power,” he says. “It was a struggle to make sure the electrician was lined up, the right circuit breakers were there and we had enough cord to get to all the spaces.”

Padgett had been working on a grinder with three separate heads and vacuums which were mounted on a forklift chassis and finally put it to use on the Detroit project. The contraption looked like it came straight out of the movie set for “Road Warrior.”

“Everything was driven by propane — the grinders, the vacuums and the forklift chassis,” he says. “It allowed our crews to be way more efficient and mobile and we still use it today!”

A more mobile fleet
Padgett says he is seeing a monumental shift in his equipment sales, estimating almost 90 percent of his new machines that go out the door are gas-fueled. Like Padgett, Abrahamson has seen similar sales numbers and touts the agility of the propane equipment as the main reason for the sharp rise in his clients’ cord-cutting purchasing patterns.

“Propane machinery is much more mobile,” Abrahamson says. “It allows a contractor to get to a job site and be off-loaded and up and running in 15 minutes. Two years ago 80 to 85 percent of our equipment sales was electric machines. But the Target and Walmart specifications have reversed that ratio. The majority of those purchases are by guys that already have electric machines.”

Although the cord-cutting propane machinery has many attributes, it does have its drawbacks Abrahamson says. These include the initial investment costs, increased maintenance and some environmental limitations.

“The cost is about $4,000 to $5,000 more for each piece,” he says. “It also requires much more preventative maintenance. The oil needs to be changed consistently. The clutches and belts need to be maintained as well. And the longevity of propane equipment is half of what electric machinery is.”

Abrahamson also says the propane machines are much noisier. And contractors have to be careful running them in small, contained areas because a lack of oxygen will cause the fuel system to shut down to avoid harmful carbon monoxide exposure.

“These machines aren’t meant to be ran in tight quarters which are not well ventilated,” he says. “The fuel system is designed to cut out when oxygen levels are lowered to a certain level. The machines won’t run.”

Yet, despite the negative components he sees the cord cutting continuing.

“Propane machinery will never go away,” he says. “It might die down after some of the big-box retail work sub­sides, but it won’t go away. And we are constantly looking at new ways to perfect the technology. They will continue to get quieter and require less maintenance.”

As the concrete polishing industry continues to grow, each contractor must decide whether or not to “cut the cord.” The initial costs can be substantial, but the increased mobility and subsequent productivity may prove worth enough to justify the investment.

The Power of Diamond Grit 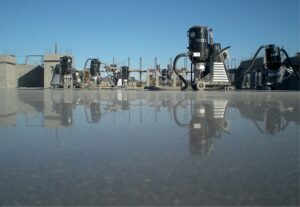 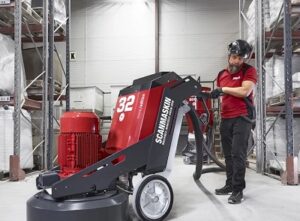