Black gets maligned as a color in the home, but when used in the right way it can contribute a richness along with a vibe that’s both retro and modern.Nick Dancer of Dancer Concrete Design in Fort Wayne, Indiana, got a chance to refurbish a black floor in an architect-designed mid-century modern home where the color was spot on.

The dining room floor was originally black concrete, although at one point it was covered in carpeting. Dancer says the homeowner didn’t know how to take care of it and it was showing signs of age. It was integrally colored, but in the 1950s concrete was colored differently than it is today.

The homeowner had been repainting it black every couple of years, he says. “It was black concrete underneath all the paint and she knew that polished concrete was becoming more popular, so she started talking to us about the options.”

The concrete floor, which connects via steps to a lower-level living room and hallway, continues two feet up the walls as well. Dancer removed the paint starting with a low-grit diamond abrasive and then continued the polishing process. 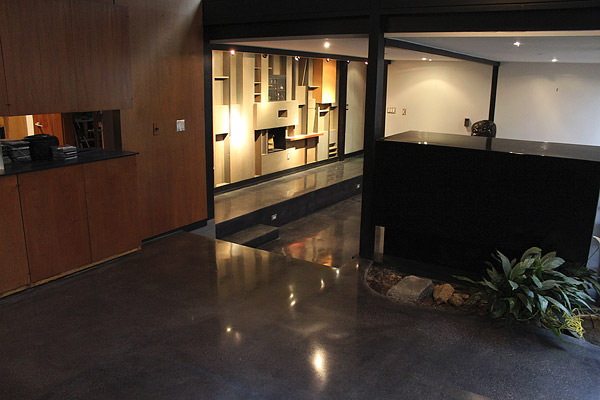 “One thing we noticed was we had to grind pretty aggressively, so we got kind of deep into the surface and found a lot of air voids,” he says. “We did a grouting process to fill those before we could polish. Although the floor was black already we filled in those textures and added another coat of black dye from Ameripolish.”

Dancer used 5-inch handheld polishers and diamond abrasives to polish the steps and the walls. “We had to lay down on our sides to get to all the crevices and the steps and corners,” he recalls. “Paint was stuck in a lot of areas that were hard to get to.”

After all that hard work, the homeowner was “super happy.” “The floor was original to the home and the rest of the finishes in the home are still original, so it was very nicely restored and it looks great.”

World First: Kamp C is the First to Print a Complete House in One Piece 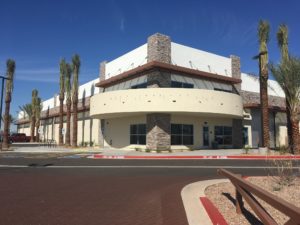