The Decorative Concrete Hall of Fame is pleased to honor its inductees for 2014: Gary Jones, Frank Lewis and Jon Nasvik. The Hall of Fame will announce the group at the 2014 Concrete Decor Show.

The Decorative Concrete Hall of Fame was established to recognize individuals and companies whose contributions have impacted the future of decorative concrete as an industry and an art form. The new inductees were chosen by Hall of Fame members and Concrete Decor parent company Professional Trade Publications Inc., which manages the Hall of Fame.

These three exceptional individuals have gone above and beyond in their careers, helping the decorative concrete industry thrive through their achievements and commitment to excellence and innovation. 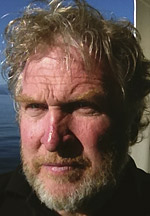 Gary Jones started Colormaker Floors in 1992. The company provided stamped concrete for three years, then branched out and began developing cementitious toppings for commercial applications. The motivation for this was partly weather-related. Jones lived in Canada in a place where it rained frequently. “It’s very difficult to run a full-time concrete business there with 200 days of rain,” he says.

Jones spent six years researching toppings as part of Colormaker’s move. “We developed a line of toppings for Colormaker and did installations for large clients,” Jones recalls. “One client we did 60 stores for.”

Jones was an early innovator of high-performance overlays that didn’t crack or delaminate. At the time, Jones’ overlay formulas were similar to the thin-set formulas used to set slate, a material he began working with before shifting to concrete.

In 2000 the company name was changed to Smart Surface Technology Inc. At that point, Colormaker became a brand name. SST is the manufacturer and also privately blends for a handful of customers that Jones consults for. Jones is skilled with a trowel and will often install their products himself, and he provides training and support for their products.

SST was a fully fledged manufacturing company until 2010, at which point it began focusing on consulting and supplying materials for high-end clients such as Martha Stewart, Pottery Barn and Whole Foods. Jones is busy in New York City, installing concrete for Marc Jacobs fashion shows and showrooms for Italian furniture maker Minotti.

Jones has perfected a sprayable concrete called Arapido that allows for specialized applications. Arapido can be sprayed to 1/6 inch thick. Color can be broadcast into it, and it can be polished with diamond polishing tools the next day. “It allows us to take an old floor and make it look new,” says Jones. SST markets both stains and dyes that can be used to color an existing concrete floor, as well as color-enhanced resurfacing treatments for an artisan touch on any job. 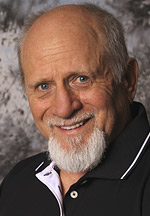 Lewis and his partners began with the idea that contractors could bond a cement coating on top of existing concrete pool decks and enhance ordinary, plain gray concrete with beautiful and creative textures, patterns and color. The idea of a thin cement coating doesn’t seem unusual now, but at that time it was unheard of. “I suppose what motivated us more than anything was that people told us we couldn’t do it, it will never work. Those were exciting times,” Lewis says.

Founded in 1970, Sundek developed a novel coating process that could be applied over existing concrete surfaces. Later, the company introduced Masonry Effects, a finish coat that would create a clean line at grout joints. Today, Sundek is an industry leader in decorative concrete resurfacing, including manufacturing their own products, completing projects, and maintaining a robust dealer network.

There was a lot of interest in their coatings from the company’s earliest days. “We were the concrete problem solvers for pool builders in Southern California,” recalls Lewis. “When they had trouble with their pool decks they would call us.” That led to an early partnership with Anthony Pools, which quickly grew the Sundek dealer network from coast to coast. In the 1980s, Sundek set up a dealer program that provided exclusive access to geographic areas.

Aside from his success in business, Lewis has been a tireless promoter of decorative concrete through proper training of contractors, both in the field and in running their businesses. He credits many of his opportunities to being an active member of the American Society of Concrete Contractors and the Decorative Concrete Council, also serving as a past council director. “That experience has allowed me to work with many different committees and some of the top contractors across the United States that were involved with decorative concrete,” he says. “I’ve done all phases of decorative concrete, from the installation to sales, marketing and management. This industry has been my life’s passion for over 40 years and the friendships that have been forged have been the ultimate reward.” 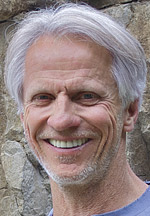 Jon Nasvik grew up with a trowel in his hand. His father was a contractor and would take his son along with him to job sites. “I’ve been messing with concrete basically my whole life,” Nasvik says.

Nasvik was an art major in college, and used what he learned to investigate ways to make better products. “I knew there were better ways to do this kind of thing,” he says, “I just had to find them.“

“It hit me one day to try creating a shallow imprint tool that incorporated texture with the pattern at the same time rather than the open, cookie-cutter imprinting tool of those days,” he recalls. So that’s what he started doing, and he became the first person to develop usable stamps for installing both pattern and texture in decorative concrete. Until Nasvik’s innovation, stamps were cast aluminum — very heavy with frequent breakage.

His first pattern was a stacked bond pattern designed using Chicago common brick, which he took to a meeting with Disney officials in Burbank, California, who were seeking a look for the EPCOT Center back when it was still in design phase. “We couldn’t tell the real brick from the fake brick,” he says. Around that same time, Jon began installing concrete rock formation projects for zoos and hotels around the country.

One of the issues with stamped concrete has been how difficult it is to achieve an aesthetically pleasing look with a random pattern stamp. Nasvik worked for the past five years to develop a method to add a pattern to a texture stamp, and he recently secured the patent. He says his new method works very well on both large and small jobs.

Since relocating to Sun Valley, Idaho, from his native Minnesota, he has kept busy installing decorative concrete countertops, sinks, tubs, showers, fireplaces, outdoor furniture, stamped flatwork and, of course, concrete rock formations, along with fulfilling many other unusual requests from clients there. He calls his company Cliffhangers because he still enjoys installing rock formations whenever he can. 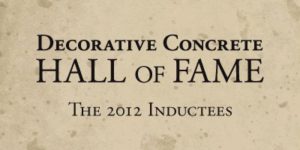 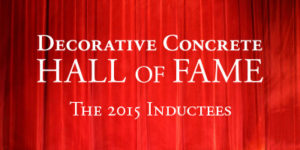 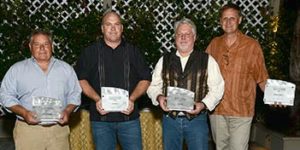