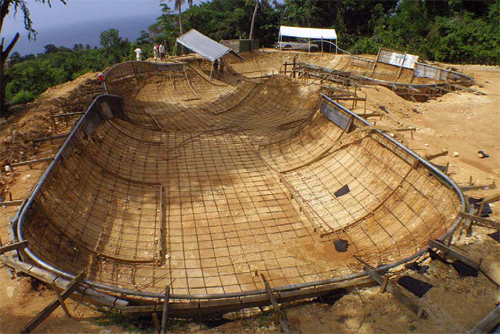 Stefan Hauser, owner of Placed to Ride Inc., was one of 10 firms to bid on a skate park project for the city of Quebradillas, Puerto Rico. A local in-line skater had secured federal funding earmarked for sports parks on the island, and the city now had to decide who they were going to entrust with that money. Hauser’s bid was not the lowest, he says, but because of his experience and expertise – he’s done nothing but skate parks over the last decade, on three different continents – the city was confident that he could deliver the most bang for their buck. And Hauser did not disappoint.

Hauser is from Seaside, Ore., and has been skateboarding for most of his life. After years spent working for other skate park contractors on municipal projects in Oregon, Hauser started Placed to Ride in 2002 and found himself immediately in demand around the world. The company’s first project was a private park in Austria, followed shortly by one in Sweden, another in Austria and a consulting job in South Africa – the list goes on. The Quebradillas park was Hauser’s second in Puerto Rico, where he has lived for the last year.

Coming from the West Coast, where there’s a lot of advocacy for the sport and a wealth of well-trained concrete contractors, Hauser was accustomed to high standards in skate parks, but those standards are not the same the world over. On the West Coast, Hauser says, about 7 out of 10 parks are really good. In Puerto Rico, that number is more like 1 out of 10. “It’s a big world,” Hauser observes, “which doesn’t have the kind of stuff that the West Coast does.” The Quebradillas skate park was a step towards changing that.

The original design that the city settled on was the brainchild of an engineering firm and a designer who had BMX bikes in mind, rather than skateboards. The planned park was going to be not only very costly to build and maintain (the plans called for expensively imported wood, not concrete), but also only useful for a small percentage of the athletes in the community. “When I got the contract,” says Hauser. “I put it on myself to improve the design.”

Obviously, the wood was the first thing to go, as of Hauser’s winning the bid. “Concrete is smooth and fast – faster than asphalt or wood – and it lasts a lot longer,” he says. Second to change was the slant towards BMX. Hauser talked to the local youth, the ones who would be using the skate park every day after school, about what they would like to see, and incorporated that into the design. In the end, he came up with a design with twice the skateable surface area of the original, plus elements for BMX bikers, in-line skaters and skateboarders alike.

Now, to build it. For a municipal project, the territorial government requires 18 different certifications (none of which, funnily enough, was a contractor’s license, which Hauser says is only required for residential work). Once he’d secured those, labor was next.

Like good skate parks, Hauser says, good concrete finishers are harder to come by in Puerto Rico than in the States, but he was resourceful. For the bulk of his labor, he relied on volunteers from the community. However, to get the flawless, smooth-as-glass finish needed for skating, he outsourced, flying in Michael Dahl and Billy Coulon, two veteran skate park builders from Oregon, for the two weeks of pouring.

The other duck Hauser had to get in the row was his sand. The grading standards for aggregate are not nearly as high in Puerto Rico as they are stateside, and for a project where surface consistency is of the highest importance, that’s a major concern. Fortunately, Hauser could turn around and use the money he saved by relying on volunteer work to cover the cost of going with a premium supplier. Not only did that ensure a consistent mix, but Hauser says the owner of the concrete company routinely came out to the job site himself to deliver the mud and make sure everything was going smoothly.

Licenses, laborers and materials acquired, it was time for the work to begin. After the site was excavated and the framework for the bowls and transitions built, the vast majority of the project was shotcrete work, followed by a thorough power and hand troweling. “You want the surface as smooth as possible,” says Hauser, though apparently you can overdo it. “Some guys will throw water on, so it looks smoother,” he says, “but that weakens the top layer – it won’t last.”

Aside from the skateable surfaces, Hauser’s initial plans for the park included some stamping. Dahl, in particular, was excited for that, as it’s his specialty. “I’m more obsessed with concrete than with skate parks,” he says. “I try to get as much decorative stuff in there ’cause it’s fun for me.” But despite their plans for stamping on some of the vertical surfaces and coping, it was not to be. “There were just not enough guys, or time,” says Dahl.

Hauser says that while purely aesthetic elements “are nice, they’re more of a novelty than anything.” And particularly because it was a community project, he wanted to make sure the city was getting the most functional park for its money. Dahl says that is always the rule for skate parks. When it comes down to it, he says, “every ounce of energy, everything that goes into the park is towards the skateable surfaces.”

Despite having to forego the stamping, Dahl’s and Coulon’s expertise certainly did not go to waste. In the two weeks they were on-site, Dahl says the schedule was jampacked. But working straight through the day in Quebradillas is not an option. “It’s such a hot climate, the concrete is getting hard the minute it comes out of the chute,” says Hauser. So they erected tents over sections of the project as protection from both sun and rain while they worked, and they did the bulk of the shotcreting in the mornings and evenings. They would alternate a two-pour day – one in the morning and one in the evening, each about 9 yards – with a one-pour day to recover their strength, Dahl says. 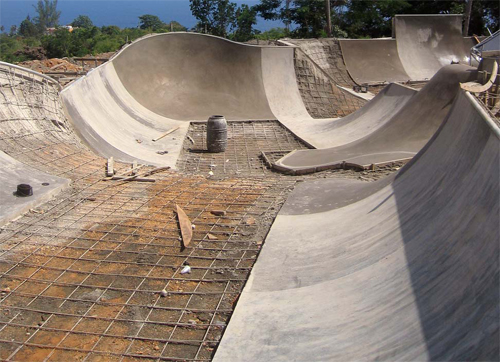 Aside from the heat, the volunteer workforce posed a potential problem. “It’s extremely hard work,” says Dahl. “Usually (with volunteer jobs) you lose all your volunteers on the first day.” But fortunately for them, the folks in Quebradillas were made of tougher stuff. “There were six or seven guys who came back every day,” Dahl says. “They were really cool and happy. They worked really hard and they were ready to drink beers afterwards.”

In the end, that interaction with the community is what sets the Quebradillas project apart. From the in-liner who secured the funding to Hauser’s early conversations with the local skaters, from the half-dozen committed volunteer workers to the regular visits from the local kids and their parents to check on the progress of the park, it was a project that was by and for the community. Dahl says this sort of project, with so much community and volunteer support, while once common in the States, has been “kind of lost and gone.” Hauser was happy to have the opportunity to bring it back for Quebradillas.

Most challenging aspect: Design and build a skate park that addresses the needs and interests of the community while staying within the city’s limited budget

Number of certifications required by the territorial government to do the project: 18

Number of actual contractor’s licenses required to do the project: 0 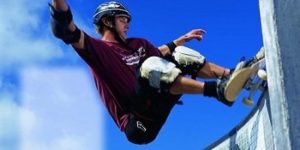