On some decorative concrete projects, the only people looking over your shoulder are other tradespeople. But when Owen Ondrisko’s crew at Stampco crafted cast-in-place benches and adjacent flatwork for a section of the Pittman Wash Trail in Henderson, they had to work around passersby during the day, then protect their work from vandals at night.

“We were doing architectural concrete down a 5-mile trail while the trail was open,” Ondrisko says. “We’re pouring concrete, school gets out, and 50 kids are walking by.”

The city of Henderson takes walking seriously — in fact, it has 37 miles of trails and made Prevention magazine’s 2007 top-ten list of the best U.S. cities for walking. In 2012, the city completed a pedestrian trail along Pittman Wash, a natural channel that drains stormwater from the city to prevent floods. 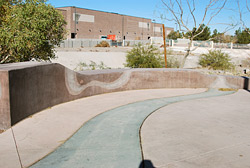 The benches — 37 in all, referred to by the city as “seat walls” — and their accompanying colored flatwork were part of a package of amenities for the Pittman Wash trail funded by federal stimulus money. In addition to landscaping, fencing and interpretive signage, the improvements included a series of rest areas, called “waysides,” with seating and hardscaping. Some of the waysides are located where the trail crosses a street. Others contain interpretive signage about the natural environment of the wash and the surrounding mountains.

The project was designed in a collaboration between Atkins, an international engineering and design firm with an office in Henderson; Lage Design Inc., headquartered in Henderson; and the city of Henderson. Lindzay Green led the project for Atkins and landscape architect Carrie Becker represented the city.

Each bench is 4 feet wide and 30 feet long, with a level top that rises in steps to a height of 5 feet in some places. Ondrisko’s crew built forms for the benches from half-inch plywood according to the Atkins design. 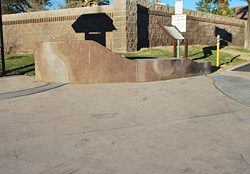 Becker says the design partners chose colored concrete for the waysides to alert pedestrians that they were approaching an “area of importance” —a street crossing or an informative display.

The benches were integrally colored with 4 pounds of Kahlua Davis Color per 6 1/2 pound sack. And they are colored all the way through, meaning a lot of that pigment will never see the light of day. “In the eyes of an owner, it was a lot of wasted color,” Ondrisko says. “But if we stained it, it wouldn’t last.”

Ondrisko says that he could have gotten satisfactory results from 2 or 3 pounds of color per sack. “Once you go over 2 pounds, you’re just losing the poundage. Within six months it just ‘bleaches out’ anyway.”

The benches have troweled tops. A sandblasted pattern of lines aligns with cuts in the surrounding flatwork and areas of exposed aggregate to evoke the outlines of the dry riverbed whose course the trail follows. The crew created color effects by varying the depth of the sandblasting.

Before starting the job, Ondrisko created a mock-up for the city that showed how troweling would affect the color. “Any time you trowel colored concrete, it mottles the color because you’re burning the color with your trowel,” he says.

As a finishing touch, the seat walls were fitted with antiskateboarding guards.

Stampco also poured the broom-finished flatwork around the benches, but went beyond the expected gray or another single color. “The city put some design into it,” Ondrisko says. They used two integral colors from Davis: Green Slate (3 pounds per bag concrete) and Omaha Tan (1 pound).

The crew contended not only with passersby who wrote in the wet concrete but also with an unexpected storm. “I poured 150 feet of curb that got washed out in the rain,” Ondrisko says.

Scope of project: Benches and flatwork for seating areas along an urban recreational trail.