If you’re going the makeover route, why not make it extreme. Or at least dramatic.

Either description can be applied to the three-pronged game plan devised to vastly revamp the hardscapes surrounding a sprawling, exclusive residential property on the Central California coast owned by businessman Paul Burns. At the helm of this triumvirate was Jay Webb, owner of 100% Concrete Inc., Ripon, California. Playing pivotal roles were JLC Concrete, based in Sacramento and owned by Jay’s brother Mike Webb, and Sun Masonry and Stain, also of Ripon and headed by Aaron Oldham.

Their task: new or restored decorative concrete surfaces for the garage, driveway, patios and walkways, with a color palette that would bring these elements into chromatic sync with the newly applied exterior facade finish.

Owners Paul and Betty Burns consulted with Mary Breslin, a Santa Cruz designer, after purchasing the home and pondering ways to update the property. The hardscapes had been acid-stained, primarily in red, at least two decades ago, and had lost their dazzle, to say the least.

“The exterior color was a dreary charcoal with barn-red trim,” Breslin says, referring to the home’s facade. “The hardscape matched this palette.” 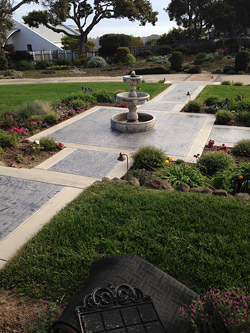 The home, in Soquel, California, overlooking Monterey Bay, had been custom-built by the previous owners and is characterized as French Country style, with beams reclaimed from a Northern California warehouse used throughout. The house had not been updated for decades, and the Burns decided a new color of paint was in order — a custom “soft Chamois” that matched the paint color applied to the living-room walls, Breslin says.

This created a new problem. “With the house transformed by this new, golden finish, the hardscape was out of sync,” Breslin says. “Mr. Burns was already familiar with the possibilities of resurfacing concrete from improvements made at his previous residence. He hired the same contractor (100% Concrete) to transform these old surfaces.”

The garage job, a bit player in this transformation drama, was relatively straightforward: a new floor surface in a granite color, using the MiraFlor Full Flake Broadcast System from Miracote, with a urethane topcoat.

A more daunting task was bringing the existing exterior concrete surfaces into step with the home’s newly applied exterior plaster and paint, and turning the gravel driveway and parking area into a decorative concrete feature.

Restoring worn-out acid stain
The original stamped-concrete walkways and patio were acid-stained in three or four colors, but these were “worn out and sealed a number of times,” says Sun Masonry’s Oldham.

Here, Breslin settled on the Sierra color, a cream or “yellow-tan” shade of solid-color stain offered by NewLook International, as the primary shade for the restoration and recoloring of the concrete. For highlights on edges, a translucent NewLook stain in Medium Gray was the choice.

The color restoration began with stripping several layers of sealer from the 4,000 square feet of patio and walkway surfaces. Sun Masonry used NewLook’s EasyStrip 1000, a water-based concrete coating stripper. To apply the stripper, Sun Masonry employed an airless sprayer of the type used to apply paint. The EasyStrip was given an overnight dwell time, then power-washed at 3,000 psi.

Then, the Sierra stain was applied using an applicator broom, a process that spanned three days. That was followed by broom application of NewLook Translucent Color Enhancer in Medium Gray as an accent color, a process that took two more days. A NewLook sealer was applied the following day with a pump-up sprayer. 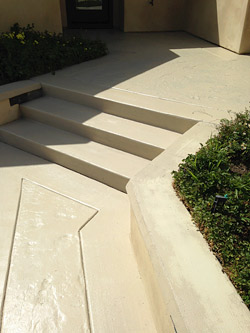 Application of the Enhancer stain as an accent color proved challenging, as the Medium Gray color contrasted sharply with the Sierra solid-color stain, meaning any blemishes from overspray would stand out. “They wanted extreme contrast using the dark gray, and any problem would be immediately noticed,” Oldham says. “It was a very detail-oriented job, I’ll tell you that.”

Oldham also emphasized the importance of surface prep before applying stains in a restoration job like this — ensuring a surface clean and free of any old sealer. “If you don’t start with a good surface, everything is lost,” he says. As part of the surface cleaning process, Sun Masonry uses a tape test, where the tape is applied to the surface, removed and inspected for any residue of dirt or sealer.

Pouring and stamping 26 truckloads
In addition to the dramatic restoration and recoloring job, 100% Concrete and JLC Concrete teamed up to install a new stamped concrete driveway. A procession of concrete-mix trucks inched their way up a twisting climb, backing up for the better part of a mile through a canyon-like cleft in the hills just to get to the job site for the driveway pour. The route left little margin for error, with a drop of 100 feet or more to one side of the road in one particularly hair-raising spot.

Texture was applied with the seamless Old Granite Cleft Stone pattern from Proline Concrete Tools. For color, the contractors used Proline’s Dura dry-shake color hardener in Soft Gray, with a darker Rock Gray release. A clear sealer was applied about a month later — Proline’s Dura-Seal HG, a solvent-based high-gloss product with VOCs of 100 grams per liter.

JLC Concrete and 100% Concrete turned on the jets for this part of the job, with pour, stamping and color-hardener application completed in two days. Jay Webb said putting down that much concrete, with color hardener, in that time frame presented a real test. Keys to making it happen were “having the talent — the crew with the talent and experience — and working with the ready-mix producer to get it to the job in a timely way.”

A synthetic reinforcing fiber, called a “stealth fiber” by Jay Webb, was added at the concrete plant to enhance performance of the concrete mix. “We run that in just about every pour,” he says. “Even with rebar. We see really good success with it.”

JLC Concrete’s Mike Webb said the aggressive timetable demanded a large crew of about 20, coming from 100% Concrete and his JLC Concrete. They worked two 15-hour days on the pour and stamping of the driveway, doing some 15,000 or 16,000 square feet, placing 11 truckloads of concrete the first day and 15 the second.

On a job this large with stamping and color hardening, “The biggest thing was making sure everything is uniform,” says Mike Webb. “Otherwise it’s a checkerboard.”

Coordinated color
Paul Burns and wife Betty Burns consulted with Mary Breslin, a Santa Cruz designer, on the color choices. Breslin says color samples provided by 100% Concrete offered an attractive match for the exterior house color, which she described as a “soft Old World pale gold befitting a Country French style original to the home.” The exterior house color, in turn, was in sync with the interior wall color in the repainted living room. All doors and trim, meanwhile, were specified by Breslin to coordinate with the dark gray roof tiles.

The colors for the exterior hardscapes — “yellow-tan” and gray — reflected this overall color scheme, and figured into a “completely updated, coordinated look” for the residence, Breslin says. 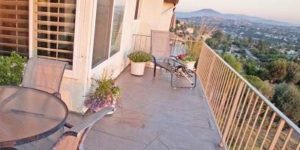 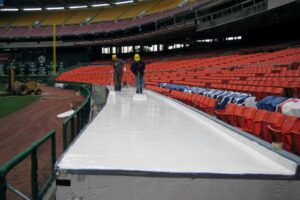 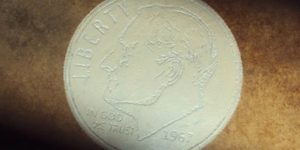