Dan Sawatzky’s background doesn’t immediately lend itself to him becoming a premier concrete artisan, but his creativity with concrete has led him to work that is far outside of the norm. Sawatzky’s Imagination Corporation is a backyard business run by father and son, Dan and Peter Sawatzky, 39; Dan’s wife, Janis; and Peter’s wife, Hailey (they met on the job). Their varied portfolio includes primarily concrete sculptures for high-profile theme parks around the world.

The elder Sawatzky, 61, a native of Canada’s Vancouver, British Columbia, started out as a fine artist in the 1970s doing pen-and-ink drawings with work in up to 40 galleries at once. In the ’80s he painted large historical murals and commissioned work across Canada and the U.S. “Peter climbed the scaffold and painted beside me for many of them starting at the age of 14,” Sawatzky says. “We began our shift to dimensional concrete work when I was in my mid-30s with Peter working alongside. My drawing skills have served well in our designs but the shift to dimensional work was inevitable as it is just so challenging and fun.”

The four family members work out of their backyard shop in the small town of Chilliwack in southern British Columbia. To complete their projects, which are planned years in advance, they occasionally need to increase the number of people on their team, but they accomplish nearly all of their work with a core team of six employees.

Projects aplenty
Their projects have been plentiful, including some large and high-profile jobs such as the re-theme of one of the world’s largest indoor theme parks, Galaxyland at West Edmonton Mall in Alberta, Canada, which took nearly five years to complete.

“We also did the design and all of the features for the Moose Mountain Adventure Golf on the third floor of Mall of America in Minneapolis, Minnesota, and a host of other projects in between,” says Sawatzky. “One of our current large-scale projects is an entire theme park in Trinidad. We always do our own design. With over four decades of drawing experience and a clear understanding of how things will ultimately be put together, we can offer very fanciful designs.”

The USS Kraken submarine destined for the pirate-themed park in Trinidad tipped the scales at almost 8,000 pounds. The pieces that leave the country must be sized to fit into shipping containers. The submarine consists of five pieces that will also quickly reassemble in only an hour or two at most.

Much of the crew’s work is for theme parks that need to open their facilities in spring to maximize their income in the short summer months. This means most of the building is done in the winter when the weather isn’t ideal for construction. Thankfully, the Sawatzkys can work for the most part in a comfortable, environmentally controlled shop and transport the finished pieces just in time for installation. This off-site assembly and installation also means the positioning of the joint lines must be carefully planned and hidden as much as possible.

Different from the norm
While Imagination Corporation is capable of doing typical rock work, it usually subs that out and focuses on what it’s best known for: slightly off-kilter, cartoon concrete sculptures. “While we use a similar fiberglass-reinforced concrete as everyone else in the business, our fabrication methods are quite different from the norm,” Sawatzky says, as is their approach. “Design always starts with a story. Each element we fabricate visually illustrates this story in a fun and delightful fashion.”

The team always begins with a sturdy, welded-steel structural frame and detailed, welded armatures using quarter-inch round mild steel pencil rod. “Fiberglass-reinforced concrete is such a versatile and strong medium,” he says. “We can use it to fabricate anything we can imagine. The key is to first engineer and weld up a sturdy steel frame with lift points built in from the start.”

The fiberglass-reinforced concrete is troweled onto the frame as thickly as possible or necessary, depending on the detail to be carved in. “We always start at the top and work our way down, hanging the mud on what has been previously applied,” he says. “We use a wide variety of tools to carve depending on the desired texture.”

Mudding upside down is always a challenge. They overcome this problem by flipping small pieces over and doing the bottoms first. “The next day we flip the pieces back upright, apply a bonding agent to the seams and then mud and carve the tops,” Sawatzky says. “Larger pieces are done the hard way.”

Because many of their projects go into theme parks and other entertainment destinations, they are designed to be able to withstand up-close-and-personal interaction with the guests. For instance, a front half of a shipwreck will have a mini-golf hole going through the front. “Between that and the back half of the ship, tracks for a riding train will be laid to transport guests into an environment that is at the heart of the theme of the attraction,” says Sawatzky. “They also have to appeal to a broad range of ages and they have to be built to last.”

A 25-foot-tall water tower was completely skinned in fiberglass-reinforced concrete. It was the centerpiece of an amusement park in Cultus Lake (about 10 miles from Chilliwack) in which almost every surface was sculpted concrete including the bridge, the creek and its banks, rocks and a building in the background.

“This project was especially fun as we literally built a 54-foot-tall mountain and tree to cover half of the building,” he says. “As much as possible was fabricated in our shop with the balance being done on site. Since this project was only 10 miles from home we could stay in the shop on rainy days and take advantage of the good weather when it came.”

Breathing room is important
Their pieces are finished with three base coats of top-quality acrylic house paint and a series of glazes to enhance the texture and colors. “The acrylic paint breathes to allow moisture to travel through it, like concrete,” he says. “The acrylic paint also has a similar expansion/contraction rate as concrete which means it does not fail.”

Even though the team is busy year-round creating fabulous items that will find homes all over the world, they’re not too busy to share their knowledge with those who want to learn. They hold sculpting workshops in their studio with the next three-day event scheduled for September 2015.

“We work with a wonderful and skilled team of helpers, each with a mix of abilities and talents,” says Sawatzky. “If we can’t have fun in this business I’m not sure what kind of business we might find that was more enjoyable or satisfying.” 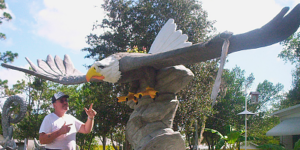 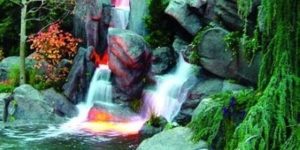