As an ingredient in most concrete mixtures, crystalline silica is virtually guaranteed to be present on any decorative concrete job site. When concrete is ground, cut, chipped or otherwise broken, tiny particles of that silica are released into the air as respirable silica dust — one of the most dangerous job-site hazards facing decorative-concrete contractors today.

Silica dust has been classified as a human carcinogen by the International Agency for Research on Cancer. Prolonged exposure can cause severe lung disease, most specifically silicosis, a disease in which the walls of the lungs scar and stiffen, causing permanently decreased lung capacity.

Aside from silicosis, long-term exposure to silica dust, even in relatively low concentrations, can cause lung cancer, as well as make the lungs more susceptible to other respiratory conditions such as bronchitis and even tuberculosis.

Due both to the virulence and ubiquity of crystalline silica dust, the Occupational Safety and Health Administration enacted a new National Emphasis Program this January to protect workers from the dangers of respirable silica dust. The new standard outlines how to calculate the Permissible Exposure Limits (PEL) for respirable crystalline silica, and also calls for educational outreach programs.

Tom Longanbach, product manager for Dustcontrol Inc., says the most significant change that comes with the new OSHA standard is that it stipulates random job-site inspections. Previously, says Longanbach, OSHA would only appear on a job site if a complaint had been lodged, but now inspections are to be more regular and more widespread, not to mention more costly.

“For the first time this year,” says Longanbach, “contractors have approached us with stories of fines [they received] for exceeding the PEL.” One occurrence cost a New York City tuck-pointing contractor $10,000, he says.

Though all three approaches serve to reduce exposure, point-of-origin control, also called source extraction, is widely regarded as the most effective and necessary.

“[Contractors] have to get the dust at the point of origin,” says Darren Diess, vice president of Dustless Technologies. “They can’t just wait until the shop’s filled with it and then clean up.”

Longanbach agrees. “With LEV systems, all the dust still gets to the workers’ breathing zone. Source extraction is really the only method that picks it up before it reaches the workers.”

There are two options for point-of-origin control: wet and dry. Wet dust-control systems produce a slurry-like mud in place of dust, which is great protection at the time of the job. But that slurry needs to be contained and disposed of — before it has a chance to dry out and become respirable again.

Dry point-of-origin systems are perhaps the more common choice, and certainly very effective, but there are a lot of considerations to be aware of when choosing a system.

“One misconception people have is: ‘OK, I have a shroud, therefore I’m not generating any dust,’” says Diess. “But if you’re using an $80 ‘shop-vac’ you may just be moving the dust around the shop.”

This is a huge concern in dust control, according to Chris McCutchen, vice president of marketing for CDC LaRue Industries Inc.

“Shop vacuums are not designed for dust control!” he says. “Don’t use shop-vacs! They don’t work!”

McCutchen’s vehemence on the issue stems from the fact that, in order to contain crystalline silica, your vacuum must meet High Efficiency Particulate Air standards and be capable of catching particulates down to 0.3 microns in size. Shop vacuums can’t do that.

Contractors need to look at vacuums just as carefully as they look at which grinder to buy, says McCutchen.

Longanbach points out that it’s also not enough to just put a HEPA filter on any old vacuum. “You need both a HEPA filter and a HEPA-rated vacuum,” he says, because other vacuums won’t be as tightly sealed as HEPA vacuums, thus running the risk of dust escaping.

“Always ask about filtration,” says McCutchen about shopping for a vacuum system. “Really understand what your filtration capabilities are before you go on a job.”

Making an informed decision on your dust-control system will not only bring you in line with OSHA and protect your crew from life-threatening diseases, but it will also, McCutchen points out, help your business.

Once you’re dust-free, he says, “you can start advertising dust-free and charge more.” 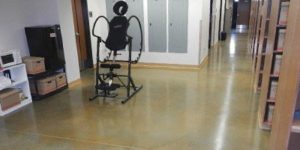 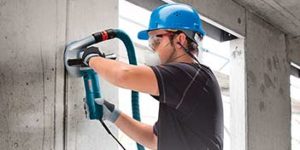 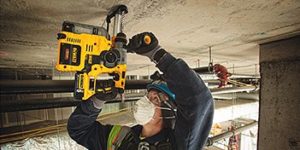