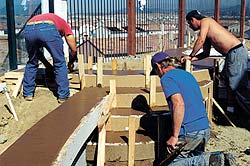 A disposable foam form for cast in place concrete wall caps to be, creating cantilevered edges that look great but won’t bust the budget.

Contractors in need of custom wall caps typically choose between pre-cast concrete, which is elegant but pricey, or cinder block caps, which are — and look — a lot cheaper.

Stegmeier Corp. has developed an alternative: a disposable foam form that allows concrete wall caps to be cast in place, creating cantilevered edges that look great but won’t bust the budget. 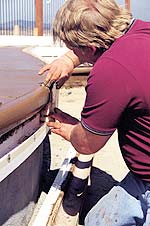 “With these forms contractors are able to give wall caps to the consumer for maybe $12 to $15 dollars a linear foot, as opposed to $35 to $50 dollars a foot for pre-cast,” says Bud Stegmeier, the company’s Western division manager and marketing manager.

Stegmeier Corp. has long manufactured decking forms and other products used in swimming pool construction, but in the past three years it has ventured into non-aquatic territory as well.

In addition to wall cap forms, the company’s newer products include step liner forms for producing overhanging treads and forms for creating concrete countertops with cantilevered edges. All come in a variety of profiles.

The company also makes Slip-N-Join Lumber, a forming material for producing free-form edges on patios, walkways, driveways and pool decks. It bends to a two-foot radius. And since it won’t warp like plywood and masonite forms do, it’s reusable.

The roots of Stegmeier Corp. stretch back to 1966, when Bud Stegmeier’s father, Bill Stegmeier, started manufacturing products for swimming pool decks in Northern California. Not content with the coping stones and brick commonly used at the time to cap pool-shell walls, Stegmeier invented a disposable foam form that produced cantilevered edges on concrete pool decks.

“It turned out to be the best thing that happened to the swimming pool industry in 40 years,” says Bud, who is part of a group of partners that bought the company when the elder Stegmeier retired. “He revolutionized the construction of swimming pools by coming up with cantilevered decks.” 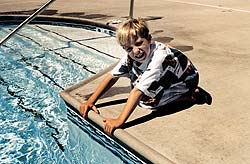 Cantilevered decking was the first in a series of innovations patented by Bill Stegmeier, who at 82 works as a consultant for the company. He currently holds 25 patents. “Not all are super money-makers, but some are gold,” says Bud. The artificial lava rock, for instance, never really caught on. But the “snap in” removable-top deck drain and the methods for putting fiber-optic lighting beneath the lip of cantilevered pool decking are big.

The company today has two manufacturing plants, one in Arlington, Texas (the home office), and the other in Henderson, Nev. It also stocks inventory at warehouses in Atlanta, Baltimore and Orlando.

This geographic spread helps Stegmeier Corp. respond quickly to its nearly 600 distributors. “Orders are in in the morning and out in the afternoon,” says Bud. “If a customer in, say, Palm Beach needs a load of material, they order by fax into Arlington, Texas, and that order is processed and shipped out of our warehouse in Orlando. Our distributors aren’t hampered by long lead times so they don’t have to carry as large an inventory as they normally would.” 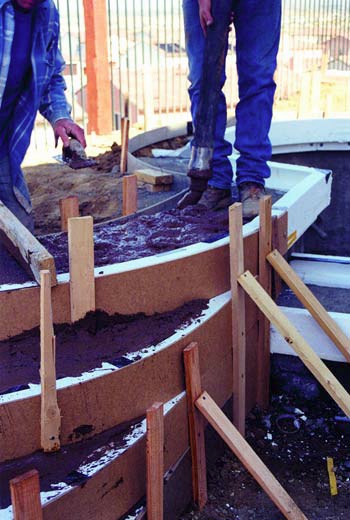 Stegmeier Corp. makes a variety of decking forms for gunite, fiberglass and vinyl-liner swimming pools. Among them are forms designed for stamped concrete pool decking, forms that allow automatic pool-cover tracks to be installed when decking is poured, and forms that produce a child safety grip along the edge of a pool. All of the company’s cantilever forms — including those for steps, countertops and wall caps — are made from expanded polystyrene foam.

The company continues to put out new products, such as an aluminum-topped deck drain for large commercial projects and forms to make backsplashes on concrete countertops, both of which will soon hit the market.

To stay in tune with contractors and see how Stegmeier products are faring in the real world, the company gets people out to job sites frequently, says Bud, who has several years of experience as a concrete contractor himself.

“Most of our new products come from being out with the contractors and looking and seeing where the problems come from,” Bud says. “A lot of companies make a product and never go out to see it in use, but we have people who get out in the field, and we are working off current experience. That experience helps us to develop new products, upgrade current products and have the answers people need to know.”

Contractors looking for such answers have a toll-free technical support number they can call. “That line drives us crazy sometimes, but it’s worth it,” says Bud. “We’re very, very aggressive as far as customer service. We’re second to nobody in that respect.” 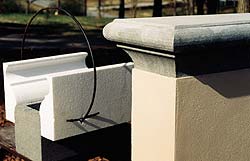 The company’s 35 to 38 employees seem to make out pretty well, too. “Every year we give time off to all of our full-time employees, usually from the 20th of December until the first of the year, and we don’t count it as vacation time,” Bud says. “And once a year we have a really big company picnic down in Arlington, Texas, and we fly everybody from Nevada down there for a big party.”

Using forms to create overhangs on steps, for instance, adds an appealing architectural detail to the finished product without adding much to the overall price of the job, Bud says.

“It’s the same pile of concrete, but by using these foam forms you’re getting something really, really striking instead of just a set of square steps,” he says.