While touring the headquarters of SAY Sí, an award-winning nonprofit youth arts organization where the workshops are to be held, Trevor Foster, regional sales manager and principal trainer for Miracote Products, and Keith Boudart, sales and marketing manager at Butterfield Color, realized there was potential for overhauling the building’s front entrance. However, there was more work to be done than could fit into a 16-hour workshop. To give the space the elaborate design they had in mind, they took on the project ahead of the show.

Foster, Boudart, and SAY Sí executive director Jon Hinojosa collaborated to finalize the design concept, using San Antonio’s Riverwalk as an inspiration. A stamped overlay was to be applied over most of the surface area with varying earth-tone colors and textures, and a troweled microtopping representing the San Antonio River flows from the building to a garden area below.

In order to complete the nearly 2,000 square feet of surface area in just one week, workers from Butterfield and Miracote teamed up with local contractors to take on the massive overhaul. After losing an unexpected day to additional surface prep, the crew had to put in 12- to 15-hour days to meet their deadline.

“Typically this would have taken three weeks, but we had a stampable overlay going in, and then we were doing something else while it was wet,” said Foster, noting the crew had to literally walk on handrails and pull some other acrobatic tricks to avoid the wet topping. “We laid out about 90 bags of stamped overlay in about an hour.” 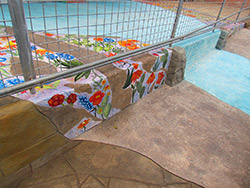 “Pretty much everybody gathered around and worked together to get done whatever needed to be done,” says Boudart. “We kind of divided and conquered.”

Once the overlay was dry, it was the SAY Sí students’ turn. On either side of the river, they were given the opportunity to paint flora and fauna native to Texas as well as put down quotes that reflect their experiences with the youth arts organization.

“They had some trepidation and nervousness because it’s so public and permanent,” says Tommy Hopkins, the visual arts director at SAY Sí. But once they got started, the students settled in, he says. “We had 20 students on the ground at once, all working together in collaboration. Even alumni who happened to be in town jumped in and helped. It was a really great creative event.”

All the Sights from 2011 Concrete Decor Show in Nashville 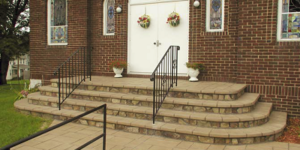