Yes, very big, in Spanish or any language.

Massive, huge, humongous— pick your superlative, as any or all can be applied to the Rinconada Margaritas high-rise residential development in Zapopan, Mexico.

A few numbers from Servicios Proconsa S.A. de C.V., the decorative concrete contractor that brought color and texture to the building exteriors, give some perspective on the mind-boggling size of this project.

We’re talking 350,000 square feet of exterior vertical facades on the three towers, involving preparation and application of two acid stain colors and a penetrating water repellent. Oh, and there were windows to mask— nearly 4,400 of them— consuming something like 100,000 feet of tape. And let’s not forget the 750 or so brushes used before it was all over. 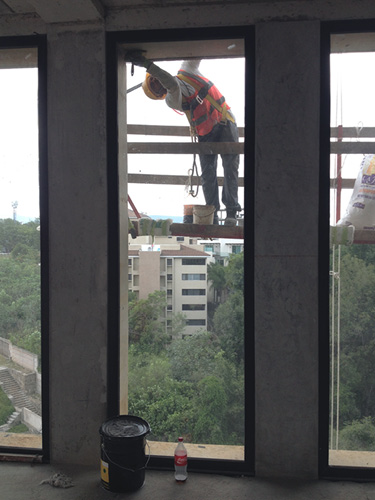 Engineering the hanging scaffolding system for the project was a major undertaking and involved an interconnected web of steel cables assembled on the roof of each building.

If all went well, the whole process of moving the scaffolding and the material application spanned approximately one month for one of the development’s three buildings. That’s if the weather is playing along. And in this part of Mexico— the southwestern region’s Jalisco state— dry weather can be hard to come by during the rainy season extending from about May to November. 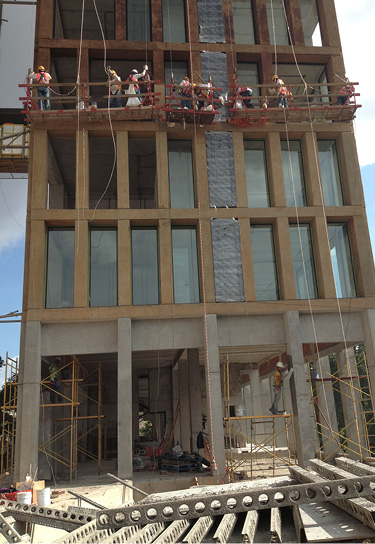 “In a 90-day period we had only 34 working days,” says Mauricio Zambrano, ownership partner of Servicios Proconsa and head of the company’s commercial national distributorship division. And a dry surface is essential for stain application, he adds.

In the design and color themes for the tower complex, architect Luis Aldrete sought a connection to the site’s geologic and geographic environment, with a terracotta pigment shade for the stained concrete exterior, seen as providing balance in the lush green surroundings. A combination of two acid stain colors were used to produce the hue sought by the design team.

In addition to minimizing the building’s footprint on the site by creating “svelte” structures, Aldrete says the irregular geometry of building location and alignment allows views for 87 percent of the residential apartment units and produces “crossways ventilation” for 100 percent.

“The atmosphere is conserved at all times,” Aldrete notes about the buildings’ design and surrounding setting. “The color green prevails.” Daylight is filtered through trees, ponds and stone, making stunning views of the city and surrounding plateau landscape “the guiding axis across the project.”

The project architect, in charge of the construction for owner Grupo Cube of Guadalajara, is Diego Quirarte.

The scaffold system, including design and operation, was directed by Javier Uribe, installations manager for Servicios Proconsa. The company, based in Monterrey, specializes in concrete stain work. It also is the Kemiko distributor in Mexico.

Three buildings, one tall order
The Rinconada Margaritas project thundered onto the radar screen of Zambrano and business partner Federico Jasso in early 2014. Initial samples of color and texture were produced, and the design team sought an exterior material that would seamlessly integrate the towers’ concrete structural columns and nonstructural, parallel columns that framed the buildings’ expansive windows. This was integral to creating a monolithic impression of the three towers emerging from the central Mexican plateau like a tectonic extrusion. 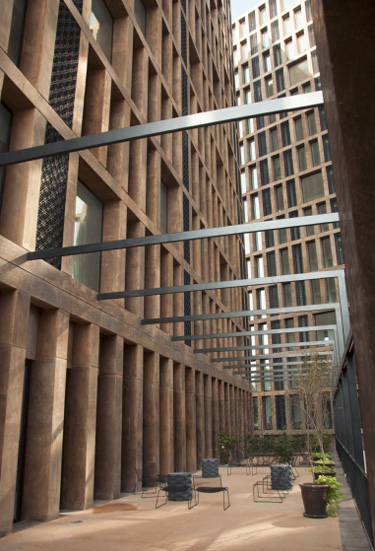 Differences in surface tone from the structural columns and other construction issues forced them to scrap that plan and switch to ceramic brick covered with a troweled-on polymer cement. The work would be done by a subcontractor.

Troweling of the polymer cement was adjusted to reduce gloss in samples submitted to the design team, says Jasso, general manager of Servicios Proconsa and head of the company’s installation division.

The sampling and review process for materials and colors took place from April 2014 to April 2015, with a final OK coming in June 2015. Servicios Proconsa got to work immediately, and essentially completed the project in December 2015. 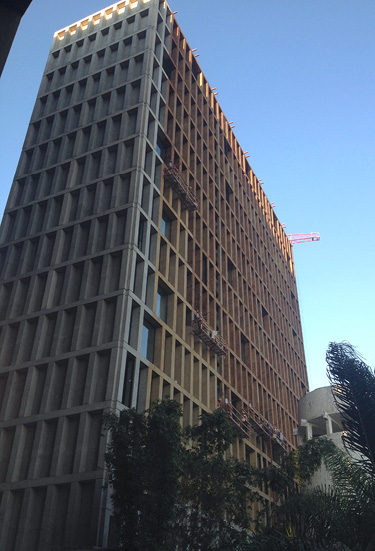 Rising to the challenge
With the scaffold engineering plan devised and in place, work got underway in mid-2015, starting with the largest of the three 12-story towers. The process went section by section, floor by floor, with surface preparation and acid stain application performed with 6-inch paint brushes. A light-colored Kemiko basecoat stain (Cola) went on first, followed by a black (Ebony) to produce a color exhibiting yellow and chocolate effects. Zambrano and Jasso liken this hybrid earth tone to the region’s prevailing morphology— the soil and geology of this mountain and plateau province, situated some 5,000 feet and up in elevation.

When hit with sunlight, the lighter stain tone is dominant, while in the shadows the color appears darker, Zambrano says. 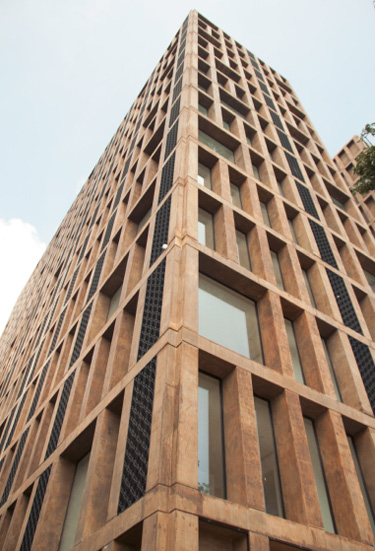 With the project scaffolding program, a battery of 14 hanging scaffolds scaled the sides of the buildings. Crews applied the polymer cement, followed by the acid stain. Then they cleaned away the residue and applied a penetrating silane/siloxane water repellent.

For the complex’s larger building, all these tasks were carried out on one side of the facade— four days to apply acid stain, one day to clean up the residue and two days to apply the water repellent. Then, the crew disassembled and moved the extensive scaffolding system, which took four to six days. It took 11 to 13 days to complete one side of the building. 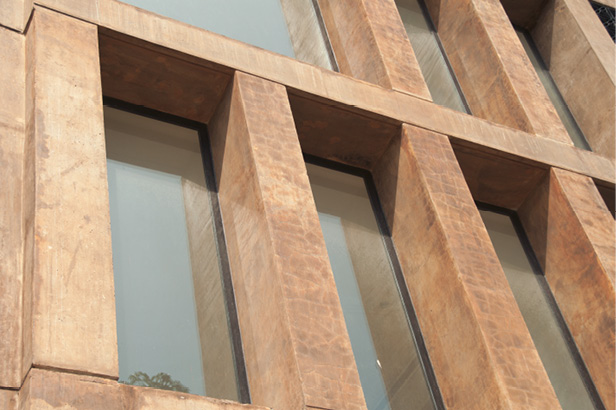 For the two smaller buildings, the crew worked on two sides of the facade before taking the scaffolding apart and moving it to the next section.

Massive in scale or not, Zambrano and Jasso say Servicios Proconsa always pays attention to details and follows proper procedures. For this project, that meant painstakingly removing the residual release from the structural columns’ surface to make sure the stain penetrated and reacted properly. The manual cleanup of the residual acid stain with water and cheesecloth was very demanding.

Even with such measures, sanding the structural columns still left traces of release agent in crevices and other recesses. Fortunately, Zambrano says, the design team viewed the resulting variation of colors as a positive— it was much like the variegated colors found in natural stone. 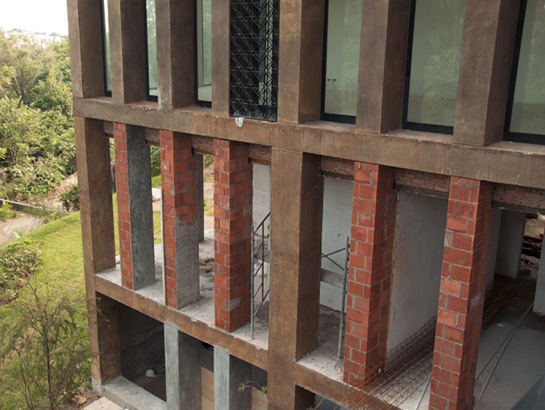 Also part of the quality assurance package was the enormous job of masking the 4,372 windows that measured 3-by-9 and 7-by-9 feet. The recessed window design, Zambrano says, added complexity to the stain-application process. “This kind of care is what differentiates us,” he says.

These little details add up to one big, successful execution of the designer’s vision. If not the largest such stain project anywhere on the planet, Zambrano and Jasso figure it’s got to be in the running.

Gigante? Giant-sized, for sure. Gigantesco— gigantic, without question. By any measure, it’s realmente asombroso. 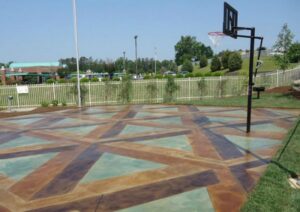 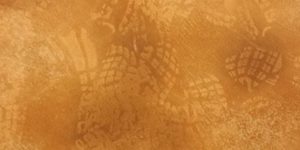 When Acid Staining Concrete, Tread Lightly Every Step of the Way 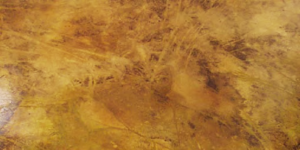 Recipe: The Look of Cork with Acid Staining