Question: I have a stamped concrete patio and the antiquing/highlighting color is missing. What can I do to add more color variation and accent colors? The concrete was placed one week ago and has not been sealed.

Welcome to the new age of antiquing stamped concrete. When it comes to antiquing and/or providing accent colors on stamped concrete, installers today have more options than ever. The traditional method of using a colored powder antiquing release is still quite common, but new methods of coloring stamped surfaces to give them a realistic look have gained in popularity over the last decade. These new post-coloring systems, while varied in their makeup and methods, have one thing that sets them apart from using traditional antiquing release powder — cleanliness. How they work is a question I find myself answering more often these days.

I’m not sure who can claim the title of the first person to use liquid release, but one thing is for sure . . . they — and the concrete they antiqued — are a lot less “colorful” after the job is done. Clear liquid release, a blend of light solvents often spiked with bubblegum fragrance to hide any off-putting odors, does the same thing powder release does in regard to keeping the stamps from sticking to the concrete. However, it’s clear so there’s no secondary highlighting color.

Without highlights and antiquing, stamped concrete does not look very stone-like and, in many cases, looks downright fake! So why stamp and color concrete this way? It’s all about cleanliness and safety. As anyone who has used or even been around when antiquing powder release is being applied, it is messy! It can also pose a health risk if proper dust masks are not worn. While testing has shown that release powder is not hazardous, repeated exposure to fine powders has become a health concern for many installers. For this reason, commercial jobs and/or regional areas have banned the use of surface powders in some cases.

The desire to add color to stamped concrete after imprinting with clear liquid release has ushered in the new generation of post-coloring systems. They all basically work the same, but based on their ingredients and how the systems are applied, you can end up with very different results.

Carriers and colors
There are two key ingredients to all post-coloring systems for stamped concrete — a liquid carrier that makes up the majority of the system and a coloring agent.

Like its name implies, the carrier “carries” the color to the surface, and then its job is done. In most cases, it evaporates, leaving just the color behind. In some cases, where the post-coloring system is also a sealer, a resin is left behind that helps lock in the color. Carriers used in post-coloring systems include water, acetone, alcohol, liquid release and resin, among others. Because most any liquid will work, many installers have created their own coloring systems using different liquids.

The color portion of these systems is some type of UV-stable pigment, usually iron oxide or acrylic-based. The color makes up a small percent of the whole system, but imparts 100 percent of the final color. How the pigment and liquid carrier interact has everything to do with how the post-color system works and the type of highlights it will produce.

Soluble and insoluble systems yield different results
There is more than meets the eye when you post-color stamped concrete. In broad terms, a colored liquid is applied to a concrete surface to create color highlights and produce a “natural” color effect. Depending on what type of post-coloring system is used, the entire surface can be stained or only the low-texture areas will retain color. This is where the carrier and color interaction come into play.

If the pigment used is soluble in the carrier — meaning it completely dissolves, like salt in water — you’ll end up with a post-color system that acts more like a stain or paint, coloring some or all of the entire surface. Most of these types of systems are made by mixing a liquid color agent with a compatible carrier, such as a water-soluble color paste in a water-based sealer.

The installer can manipulate color variation by diluting the soluble system and controlling how much is applied. It produces greater color variation where heavier concentrations of color end up in the low areas. However, in most cases, color will remain wherever this type of post-color system is applied. Systems such as acid stains, water-based stains and tinted sealers make up the majority of this coloring system category. It is best used when a major color change is desired across most of the stamped concrete surface.

If the pigment used is insoluble — meaning it does not dissolve, like oil in water — you’ll end up with a post-coloring system that acts like an antiquing agent, depositing color primarily in the concrete surface’s low texture areas. Most of these systems are made by mixing an insoluble colored powder with a liquid carrier, such as a release powder mixed in liquid release. The solution is then mixed or shaken to break the pigment into smaller particles.

When applied, typically by sprayer, the color system runs to the low areas of the textured surface and puddles. Since the pigment is not dissolved in the carrier, it stays in it until the liquid evaporates. This process allows the liquid to carry a high concentration of color to the low texture areas, creating highlights and antiquing more closely resembling concrete stamped with powder release.

Systems such as color powders in water, release powder added to liquid release, or release powder added to a sealer or coating make up the majority of insoluble coloring systems. It should be noted that when using colored antiquing release powder with any carrier, no more than 1/4 cup of powder should be added to a gallon of carrier. This is especially critical when adding powder to a sealer, as high concentrations of powder color in a sealer can create issues with the sealer’s ability to bond to the surface and/or form a proper film.

Surface deep
Anytime post-coloring systems are used, keep in mind that your highlighting and/or antiquing color is topical and, unless mixed with a sealer, there is no binder. In most cases, a sealer system is required to lock in the color and provide a level of protection.

Installers also should convey to their customers that the color in these systems is only on the surface, and as the surface wears, so goes the color. Additional maintenance may be required to keep the color and overall stamped surface looking its best.

No matter the system or method you use to stamp concrete, understanding post-coloring techniques is a good tool to have in your arsenal. 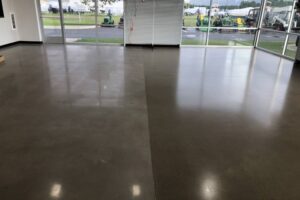 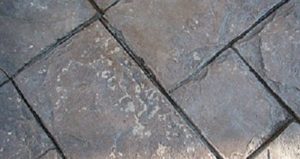