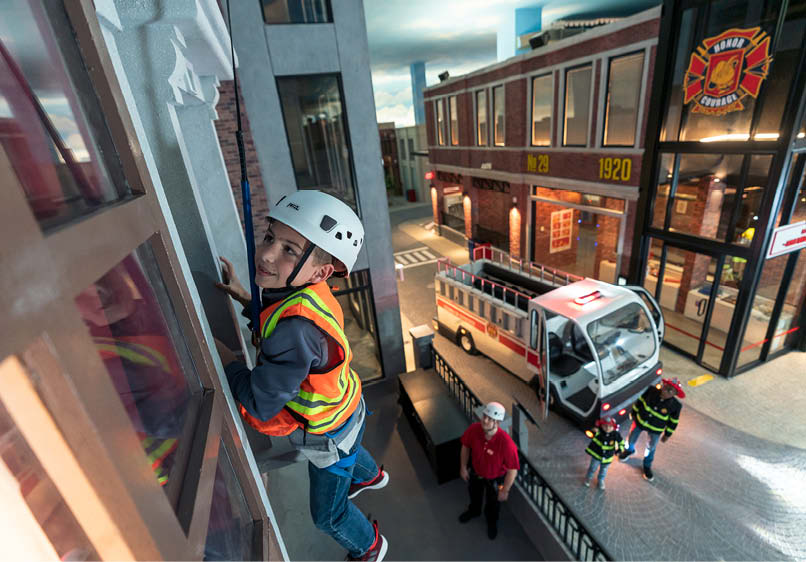 Many people get into the construction trades because of the ongoing challenge of building something new. Imagine the thrill of helping to build a whole new city — in 14 weeks.

That’s exactly what production manager Jeff Parker, superintendent Juan Garza and a team ranging from eight to 15 artisans with the decorative concrete division of Dallas-based Concrete Preservation did during fall of 2019. As for the quick turnaround, well, the “city” is only about 80,000 square feet and sized specifically for children 14 and younger.

When Dallas KidZania opened in the Texas suburb of Frisco in November, it was the first U.S. franchise of this Mexican-based corporation that dedicates itself to helping children learn by doing. Set up as a community in miniature, it offers kids the opportunity to role play and earn “money,” called kidZos, while trying out 100 different careers.

And, like any good community it needed concrete for streets, sidewalks and a town square. 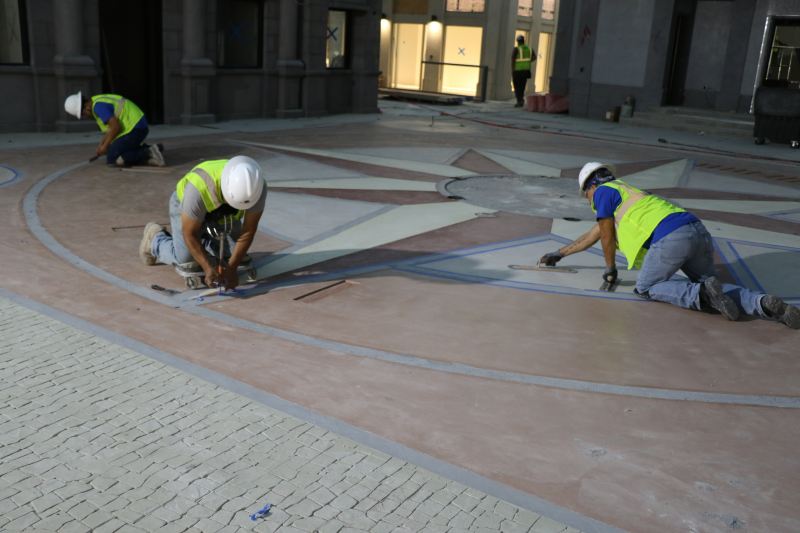 Parker explains that the local office of general contractor Turner Construction Co. invited Concrete Preservation, a division of Southwest Construction Services, to bid on the project.

“We have a great working relationship with Turner and always try to bid all of their decorative concrete,” says Parker. “This is the type of job we really enjoy. Thousands of people will see our work on a daily basis.”

“They have more than 20 locations all over the world, and they tried to duplicate what they did in some of those other locations,” Parker says about KidZania. “However, the mockup process was lengthy. It took multiple attempts to get just the right look the owner was looking for.”

One big issue: finding miniaturized stamps for the city’s “streets.”

Initially the company looked at getting custom stamps made but found it to be cost-prohibitive for a one-off job. Instead, Parker turned to BC Decorative Supply of Farmers Branch, Texas.

“We work with them constantly. They’re our go-to store for any decorative needs,” Parker says. 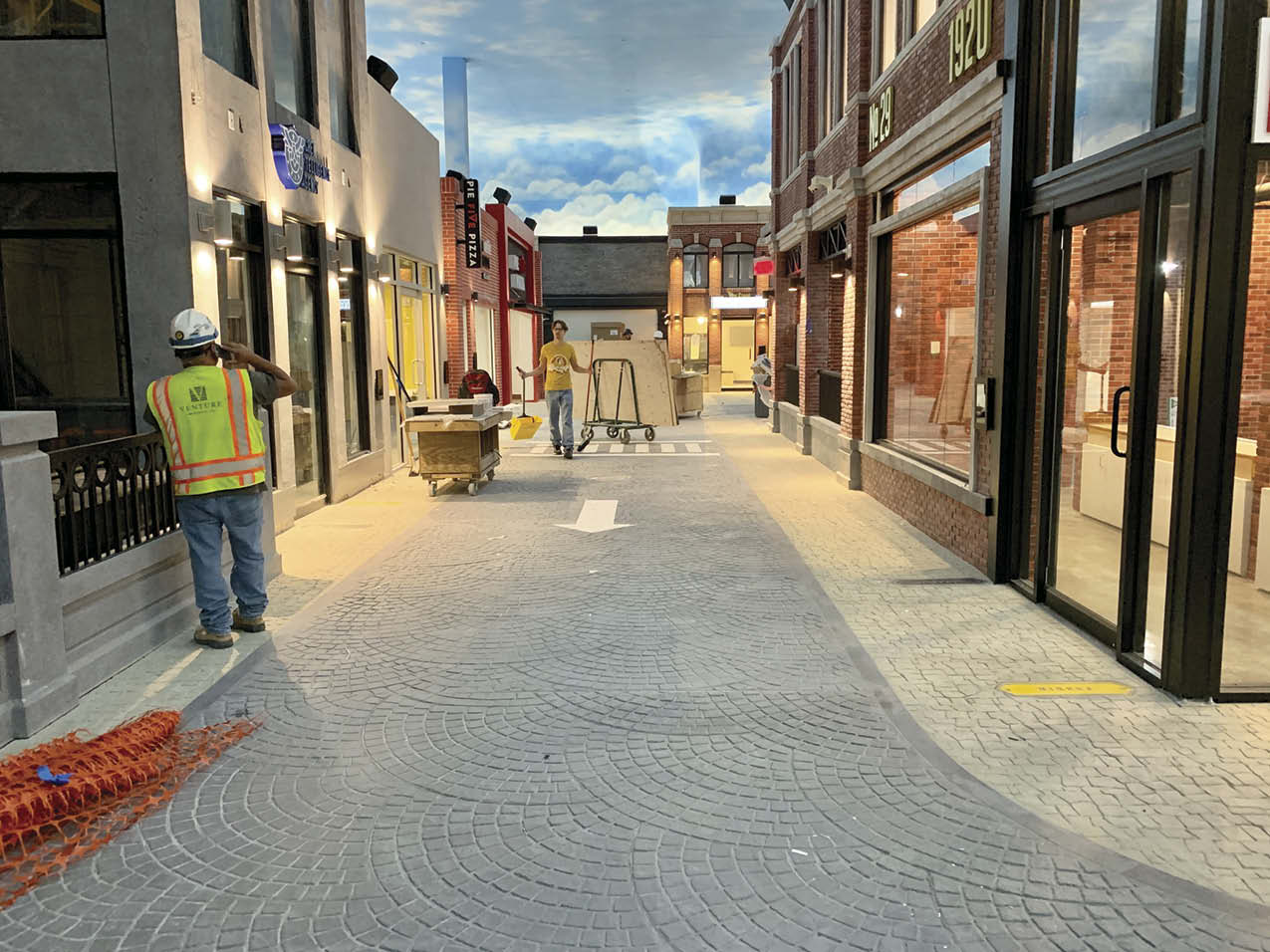 Ultimately, the project team landed on Lisbon Granite and Belgian Fan stamps from Increte Systems. Parker explains they began the stamped portion by installing more than 15,000 feet of zinc strips in the floor. Those served as dividers between the different areas of concrete.

“The roadway, which goes through the middle (of KidZania), was done with the fan-stamp pattern in a medium gray,” he says. “Then, along the roads and in many doorways, we had about 7,000 linear feet of 4-inch smooth bands that run along the streets and look like curbs. It’s a way to delineate between the different areas, as well.

“The sidewalks are done in the Lisbon Granite pattern, which is just a small random stone, and the color for that is Sandstone,” Parker continues. “Then, there are bus stops throughout the facility and those are done in a herringbone brick pattern in a red-brick color.”

To further complicate the job, each “business” required two plaques to be set in the sidewalk outside its front door to inform youngsters where to line up. One side of the door was for young people who were already “hired” to work at the businesses. The other side is where youngsters line up to apply for a position.

But those weren’t the only places where Concrete Preservation embedded things in the floor. In the center of the park was a 1,500-square-foot concrete medallion. This medallion features a variety of shapes in multiple colors, sectioned off with zinc strips.

There, “Embedded plaques give the locations of the other KidZanias throughout the world,” Parker says. “Each has an arrow pointing in the direction that tells you how far away they are.”

Aside from the challenges of the multiple embeds, Parker says the general contractor and owner made frequent changes. These changes happened right up until the job was complete in early November. And, even though Concrete Preservation was brought in near the end of the job, the company still had to deal with other trades finishing their work while he and his crew tackled theirs — a situation he calls the most-challenging aspect of the job.

To meet that challenge, the company had to be very flexible.

“We worked with Turner on a daily basis to ensure we did not disrupt the other trades,” says Parker, adding they often made special concessions for craftsmen who were there from other countries. “We did a lot of ‘jumping around’ to make the project go better for everyone involved.”

Inconveniences aside, Parker says he’s happy that the job called on such diverse skills from his crew. He is also happy that they were up to a challenge that he doesn’t believe some of his competitors could have met.

“It’s a fairly large-sized project and it took a lot of resources to pull it off,” he says. “We were in a really good position to do this job. Instead of just doing concrete polishing, it’s nice to utilize other skill sets and call on some high skill levels to pull it off.

“That we were able to take it on and not just get it done but succeed at it. They did a terrific job and it really makes me feel proud,” Parker adds.

Should KidZania ask Concrete Preservation to do similar work at its other planned facilities in the U.S., would Parker be willing to take the job on?

Biggest Challenge: General contractor and owner making changes up until the end of the project; also working around the needs of other trades. 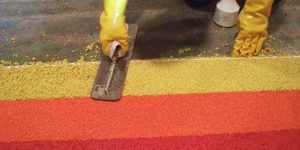