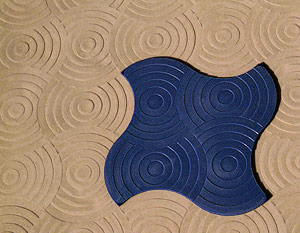 After more than 25 years, Rick Smith, owner and president of Richard Smith Custom Concrete in Canoga Park, Calif., says he has tried all the tools designed for stamping concrete. He says that stamps have hit the end of the road in designs — every pattern that can be done has been done. So last year he decided to do something about it. Smith went to Matcrete Inc. in Ontario, Calif., with his idea of a stamping tool that creates a design on concrete using light and shadow rather than relying on secondary colors to make its mark.

After one year of designs and prototypes, Matcrete manufactured Reflections. The 36-by-36-inch stamp has a “three-dimensional” design that looks like four overlapping concentric circles, with a bite taken out of either side of each circle — shapes described as bull’s-eye hourglasses. “Ordinary stamps other than brickandsmooth tile patterns or detectable warnings have various degrees of elevation due to the natural materials they are replicating,” says Matcrete senior vice president Kris Kaitanjian. “The only consistent entity within those patterns are the grout lines or the joints — those will usually have the same depth. The bull’s-eye hourglass is a two-dimensional object, but weadded pitch to their outeredges to makethem three-dimensional. If we took the same bull’s-eye hourglasses and applied or grooved a joint into their outer edges instead of adding pitch, we would not achieve the true third dimension you see in the photos.Instead, you wouldsee something flat and without life. 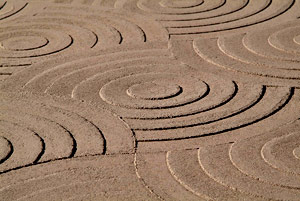 “The pattern incorporates the effect when light encounterstwo adjacent sides of an individual circle,” says Kaitanjian.

When used on sand-finished concrete, the stamp creates depth that catches light and adds shadow, so the design without color is quite impressive. “There are manyways to bring concrete to life,” says Kaitanjian. “Coloring it, saw-cutting, stamping — there are many ways to add character to hardscapes. We are unlocking the doors so that stamped concrete will trick the eye into thinking that there is an actual pulse or rhythm within the patterns.” 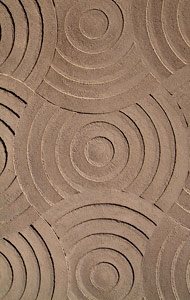 Due to theinteraction between pattern, light and perspective,the design only requires a single base color, says Kaitanjian. It is intended for use with a clear liquid release agent, since the highlights and shading that are normally achieved with a powder release agent are not needed.

“The difference between natural flagstone and flagstone-looking stamped concrete is something that only a trained eye could tell and is often overlooked by the naked eye,” says Kaitanjian. “With this new style of patterns, there is a distinguished beauty. Throughaspect andlighting, the Reflections pattern can alter its effect based on theaccent ofthe sun or merely by the angle in which it is looked at.”

Smith says he hopes this new creation will open the door to a whole new way of looking at stamped concrete and inspire a younger generation of contractors to come up with more innovative tools for decorative concrete.

Right now, only one design is available, but more are in the works and will be introduced in 2007. 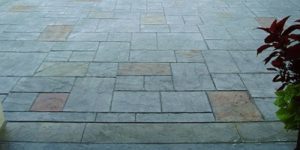 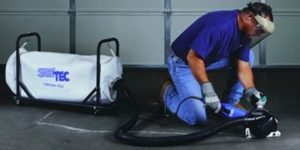 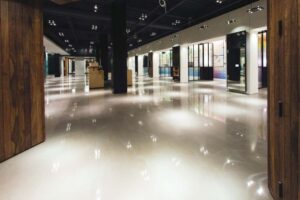 Why Mock-ups of Polishable Overlays for Concrete Matter