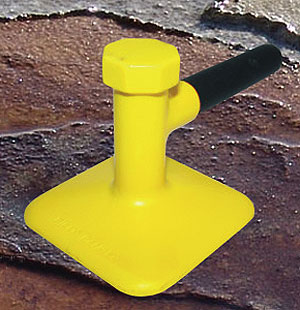 Among the quirkier success stories of World of Concrete 2006 is a little texture-mat tamper that manufacturer Proline Concrete Tools dubbed “The Billy Banger.”

The Banger is a high-density urethane hand tamper with a 7-inch by 7-inch base. A 6/12-inch pole at its center has a grab-friendly knob at the top and a 7-inch handle that extends to one side.

The tool actually wasn’t Proline’s idea. They whipped up a Banger at the request of one of the company’s biggest clients, Bill Shorey, sales associate with Spec-West Construction Supply in Sacramento. Shorey had asked Proline a few months ago if the company could develop a hand tool for tamping in corners and on borders.

The guys at Proline didn’t expect much from Billy’s banger — they only made one, and they didn’t prepare any brochures or online marketing materials for it. “It was more of, let’s give it a try and see what happens at the World Of Concrete,” says Proline vice president of sales and marketing Larry Freeman.

It turns out their customer was onto something. They plunked the Banger down at their booth, and were immediately swamped with demand. “Within the first hour of World Of Concrete we just got besieged,” Freeman reports. “Everybody went nuts over it. I can’t believe we made it through the whole show without it ‘disappearing.'”

The Banger is ideal for stamping stairs, pressing down borders that abut walls, or tamping in any other tight spot. Its main competition, Freeman says, is not another tamper but the good old human hand. “Everybody ends up putting the mat on there and slapping it with the palm of the hand,” he says.

Obviously, the Banger cuts down on hand wear and tear, but it also leaves a more consistent impression when whacking a stamp mat. It can be used vertically and horizontally, and its high-density urethane makeup makes for heavy-duty sturdiness. It’s lightweight, and its handle boasts a nonslip rubber grip.

After its surprise success at WOC 2006, Proline has rushed the Billy Banger into production and posted promotional materials on its Web site. 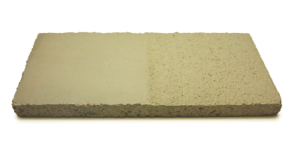 How Texture Affects Color in Concrete