If you’ve been ogling the new cordless tools but think they’re just for the do-it-yourself crowd, or wonder if they’d stand up to a full day’s work on a hot — or frigid — job site, it’s time to take another look.

Improvements to battery technology and tool design mean that cordless tools are holding their charges longer and are being outfitted with more powerful motors that go well beyond what’s needed to hang a few pictures or assemble a bookcase.

While those who make and sell tools say there will probably always be some tools that require a cord, they add that it’s no accident the cordless market is growing by leaps and bounds.

Robust growth
The bottom line for cordless tools is that it’s a thriving market to be in right now, says Erik Mazurski, general manager, supply train, for the Scottsdale, Arizona-based Border Construction Specialties.

“Every one of the manufacturers is coming out with all these technological advances,” he says. “They seem to be leap-frogging each other with their innovations. They’re designed to be ergonomic and fatigue-reducing. There’s just a lot of R&D (research and development) going into how these tools are made.”

That’s not to say the manufacturers are marching in lock-step on how they approach the market, either. Mazurski says one may have a battery that works with 20-, 60- and 120-volt platforms, while another is incorporating Bluetooth technology to help craftsmen keep track of their equipment on the job site and reduce theft.

“We continue to see robust growth in the cutting, drilling, impact and, now, lighting categories,” says Pulliam. “Many of these products are finding their way into the general contractor, residential, MEP (mechanical, electrical and plumbing) and concrete trades.”

Along with construction sites, Mazurski says he’s also seeing technological advances that are moving outdoor power equipment away from gasoline-powered engines into the battery realm.

Just how great the demand for cordless tools is, though, is open to discussion. While Pulliam says feedback he’s gotten from his suppliers shows that more cordless products have shipped than corded ones since 2013, Mazurski isn’t quite as positive.

“Right now, I’d say our sales break 65 percent for corded tools and 35 percent for cordless,” he says. “But, I also see it moving rapidly in the other direction. By the end of the year it could easily be 50-50.”

Battery revolution
Probably nothing is helping fuel the move to cordless tools quite as much as improvements in battery technology, much as it has in a range of other technologies from electronics to personal transportation devices.

Leading the charge is the switch from nickel-cadmium (NiCd) to lithium-ion batteries. Or, as Kevin Gee, a product manager with the Brookfield, Wisconsin-based Milwaukee Tool Corp., explains, “The lithium will drive larger tools longer.”

Theron Sherrod, product manager for cordless tools, batteries and chargers for the power tool group of Robert Bosch Tool Corp. based in Mt. Prospect, Illinois, puts it even more strongly.

“There were three things we looked for specifically in developing the Core18V battery,” Sherrod says. “We knew if it was designed and engineered properly we’d be able to transfer the most power into the tool, so we looked at the cells that make up the battery, the heat management of the battery and then the construction of the battery.” For would-be buyers, the numbers that are helpful in evaluating a battery are the voltage, the amp hours (the amount of time the battery can run) and then the watt hours, which represents the amount of potential energy in the battery.

“They’re all related,” says Gee. “You want to take your amp hours and multiply it times the voltage and that’s going to give you your watt hours. Of course, the bigger the battery pack, the more watt hours and the higher amp hours.”

Sherrod says one of the things Bosch was careful to do with its Core18V battery was to engineer it to increase the size by only millimeters while increasing the power output by 80 percent. And, Gee notes, Milwaukee has opted to keep its users on 12- and 18-volt platforms to keep battery weight down.

There’s an added advantage to keeping battery voltage consistent, as well. “If you change voltages every few years, that can be a huge investment for companies to change out their tools and batteries,” Gee says.

As cordless tools continue to improve, one of the biggest problems companies face is convincing buyers that they’re going to get performance as good as — if not better than — what they can expect from many corded tools.

For instance, Ricky Cacchiotti, senior concrete product manager for Towson, Maryland-based Dewalt Power Tools, says his company now offers a cordless rotary hammer kit that will deliver a day’s worth of work on a single charge.

“However, the end users still perceive cordless tools as being weaker,” Iezzi says. “Now that we have the corded performance in cordless tools, there needs to be a better awareness among users of their cordless performance, as well as battery development. We need to do a better job of getting that info to the users.”

Cordless advantages
So, is it time for you to make the switch to cordless tools? The number of considerations that need to go into finding the better answer is large. Certainly, a big one can be cost.

“The No. 1 disadvantage to going cordless is probably the initial upfront cost of the investment,” says Milwaukee’s Gee. “So, it depends on how price-point conscious you are.”

Of course, some of that can be mitigated by purchasing tools from the same manufacturer that use the same battery platform, which can reduce the investment in multiple batteries and chargers, says HD Supply’s Pulliam.

Still another huge consideration is the scope of how you’re going to be using that tool or, as Gee puts it, “the number and frequency of applications.”

For example, Gee says a drill or impact driver may be used in various applications all around the job site, while a grinder may be used continuously for a longer sustained period. How the tool is used also plays a role, Bosch’s Sherrod says.

“You really want a drill driver or an impactor to be cordless because you’re taking your tool to the job,” he says. “You’re walking around with it and you don’t want to be attached to a cord behind you. However, if you’re cutting wood, you probably have your circular saw on a table and you have a specific place to do that work, so if it’s corded it isn’t a bad thing.”

For many users, efficiency is the key, says Dewalt’s Cacchiotti.

“Company owners and users see the benefit from a job site that is not limited by the distance of the tool and the application to the power source,” he says. “Projects can be completed faster when there’s no need to search for power sources.”

Finally, there simply aren’t always cordless tools available for every task involved in concrete finishing — at least not yet. Gee notes it was only about three years ago that Milwaukee launched a cordless grinder that could handle a diamond cup wheel or a cutting disk.

However, the trend is definitely toward cutting the cord on more equipment as time goes by. For instance, all these manufacturers are committed to keeping users in compliance with federal Occupational Safety and Health Administration (OSHA) dust regulations with new cordless vacuum attachments.

And, Border’s Mazurski says, he can envision a day when battery assists may be available for tasks that today still rely on manpower, such as moving a yard of concrete.

“I don’t know if we’ll ever get away from having corded and cordless tools,” Mazurski says. “I do think there are tools we haven’t even thought of yet that will have battery power — such as a wheelbarrow. It’s all very exciting.” 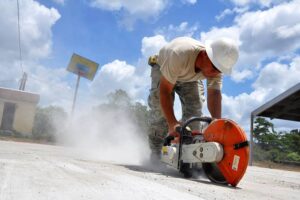 [email protected]
What Concrete Contractors Should Know About Crystalline Silica 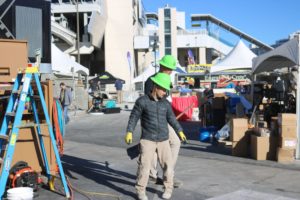 Dressing For The Occasion is Key 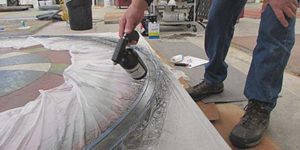 Using Spray Equipment Can Be A Speedy Solution For Contractors