Floating is typically done after a section of concrete has been leveled using a screed, but before it is troweled to a finish. Steve Jarred of Mason Supply, based in Eugene, Ore., explains that “floating” means smoothing concrete for curing.

“After you’ve poured your mud, and rodded your concrete, a float comes in and levels it and opens the mud up so it can dry,” says Jarred. “This has to be done in every job — whether a huge slab, stairs, decorative or any other situation.”

A float, generally, is a flat metal, wood, or laminate tool that smoothes the surface of freshly laid concrete. The term “floating” refers to the application of pressure so a float sits lightly and flatly just on top of the surface of the poured concrete and pushes the aggregate down, allowing the liquid in the concrete to rise, dry, and create a smoother surface.

There are a range of shapes and sizes of floats available for different types of projects. Bull floats come in many sizes, but generally are larger in surface area and made to float across an entire slab of concrete to level it. Hand floats are smaller and used to smooth, tighter surfaces and level concrete against the side of the forms it is poured into. Channel floats are made for use on larger-scale paving jobs. All of these are available in a range of sizes and in several types of materials.

Square is the most popular shape of float for both hand and bull floats, Jarred explains. While round ends leave less of an edge line in the concrete, square floats work better when leveling next to a side form, so they are necessary on any project. Magnesium is the most popular type of material for hand floats. The smooth metal surface does not create as much friction with wet concrete as wood or laminate floats do, so it leaves behind a smoother surface. If the concrete surface has begun to dry, however, using a wood or laminate float may be a better choice.

“Wood floats are used less often as they can muck your concrete up faster,” explains Jarred. “But if your concrete is starting to set, mucking it back up is useful to help it get into place.” For example, when you pour concrete for a series of steps, it is often beginning to get hard by the time you get back to the first step. Using a wood float will muck up the surface more than a magnesium float would, giving you more control over the drying surface. Additionally, wood floats leave surfaces open to better receive additional finishing products, such as dust-on color hardeners. Laminated floats work well for green-stripping steps, Jarred says, as they muck the mud to cream when the concrete starts to harden too quickly.

There are regional differences in float use throughout the country as well in what types of trowels are used in certain situations, but this is mostly due to the types of concrete that are available in different regions. In areas such as eastern Oregon, where the crushed aggregate is grittier than in many other areas, using a trowel that has impressions on the surface will push the aggregate down further, allowing the liquid to float to the top. These impressions can create grooves and ridges in smoother concrete where a smooth-surfaced magnesium float could be the best tool for the job. 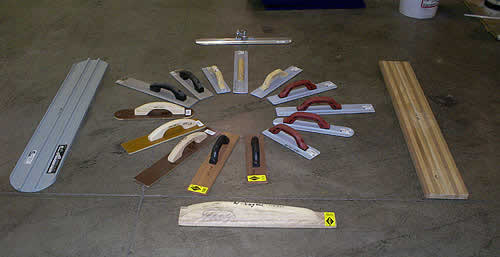 When integrating color into the mix in any concrete job, a magnesium float is again the most commonly used, as it will improve the color’s consistency. But with a dry-shake color hardener, using a wood float will allow the color to fold in better and faster.

A floated slab will take stains and sealer better than a hard-troweled slab. However, special care must be taken, Jarred cautions. If all of the float lines aren’t taken out, the stain will be more apparent in those places and appear uneven.

Regardless of the range of concrete projects a tradesperson works on, Jarred claims any true concrete finisher has a magnesium float and a wood or laminated resin hand float on their rig at all times. 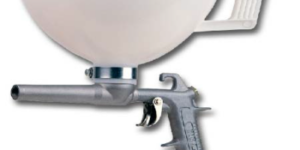 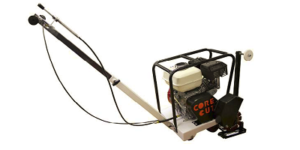 Concrete Saws for the Job Site 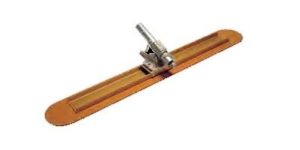 Choosing the Right Concrete Float for the Job