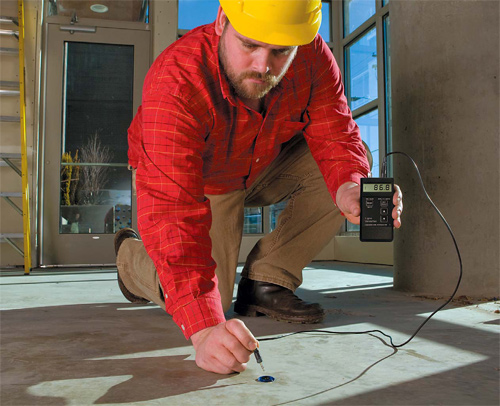 Even cured concrete can emit enough moisture to blister, cloud or delaminate a coating, especially when a slab with no vapor barrier sits on ground with poor drainage. The manufacturers of overlays, microcoatings, sealers and specialty coatings set moisture tolerance limits for their products. Ignore those limits and all bets are off that the coatings will perform as intended.

To ensure that a slab is dry enough for a coating – and to cover their butts legally – concrete artisans such as James Schwartz, of Concreteworks Design in Norman, Okla., routinely run moisture tests before laying down a topping, then document the results.

“Construction has become a big liability, so moisture testing is standard for us,” says Schwartz, who lives in a region where clay soils make moisture problems a common concern.

Schwartz relies on the calcium chloride test, which quantifies the moisture vapor emitted from a slab. The test has long been the standard in the United States, but some floor-covering manufacturers now recommend an alternative test as well, the relative humidity (RH) test, which measures moisture conditions inside the slab. The relative humidity test is the standard in several other countries.

The gradual acceptance of relative humidity testing in the U.S. follows more than a decade of research that has found major shortcomings with the calcium chloride test. Among them is calcium chloride’s sensitivity to the ambient temperature and humidity of the room and the fact that it cannot detect moisture deep within a slab.

“The big picture is that calcium chloride tests generally indicate moisture conditions in the top region of the concrete, whereas relative humidity probes tell you what’s going on in the body of the concrete, which is more useful in the long term,” says Howard Kanare, senior principal scientist with CTLGroup, which runs one of the world’s foremost concrete-testing laboratories. (CTLGroup also partnered with Wagner Electronics to develop a relative-humidity testing system.)

Advocates of the calcium chloride test say that despite the test’s limitations, it is still useful for determining the actual moisture conditions at the surface of a slab. They point out that moisture testing labs typically run both tests, since each looks at a different part of the same picture.

“The ideal is to do both,” says Keith Papulski, president of Taylor Tools, a manufacturer of both types of tests. “Otherwise, do the one the manufacturer says to do. They’ve tested the product’s performance and they tie the warranty to proper testing.”

What follows is a quick overview of both calcium chloride and relative humidity tests.

It takes advantage of the fact that calcium chloride, a common salt, absorbs moisture like a sponge. A small container of salt is weighed before and after it’s exposed to the concrete slab for 60 to 72 hours. The weight difference is plugged into a formula to calculate the amount of moisture vapor emitted from the slab. The results are expressed in pounds per 1,000 square feet of concrete per 24 hours. The tests, which are not reusable, cost about $10 per shot. The calcium chloride test protocol set by ASTM International, the standards organization, calls for using three tests for the first 1,000 feet of concrete and one test for each additional 1,000 square feet.

Most floor-coating manufacturers continue to use the calcium chloride test as the benchmark for suitable dryness. Many go with the ASTM limit for moisture vapor emissions of 3 pounds per 1,000 square feet per 24 hours, though some go up to 5 pounds.

For accurate results, the test has to be conducted with the building at the same temperature and humidity level that it will be at when in use – which can be a problem if the HVAC system isn’t operational, as is often the case during construction.

The surface of the floor where the test will be done must be cleaned by grinding, and then left to acclimate to ambient building conditions for 24 hours.

Another limitation of the test is that its results reflect only the moisture in the top 1/2 inch to 3/4 inch of the slab. Most of the moisture within a slab accumulates in the lower half, which can have twice as much moisture as the upper half.

“The calcium chloride test never takes into consideration how much moisture is below the surface in the concrete,” says Grete Heimerdinger, vice president of Lignomat USA, a manufacturer of relative humidity tests.

While the relative humidity testing apparatus isn’t as sensitive to the ambient room temperature and humidity as the calcium chloride test, it’s still important that both the test hole and the probe be allowed to acclimate to the room’s conditions. ASTM calls for the probe to be left in place for 72 hours to allow it to equilibrate before taking the reading, although at least one manufacturer, Wagner Electronics, makes a probe it says can equilibrate in about 15 minutes, producing a reading that’s within about 3 percent of what the documentable reading will be after 72 hours.

While the relative humidity test provides a more complete picture of what’s going on throughout the entire depth of the slab, it costs substantially more than calcium chloride tests – at least upfront. The testing apparatus costs between $500 and $1,000, but after the initial investment the cost per test for most systems runs about $2, which is how much the probe’s disposable sleeve runs.

“In the long run relative humidity tests are more cost-effective than calcium chloride,” says Paul Laurenzi, vice president for sales and marketing with Delmhorst Instrument Co. “You’ve got a higher cost of entry, but once you’ve bought the moisture meter the only consistently replaceable items are the disposable sleeves.” 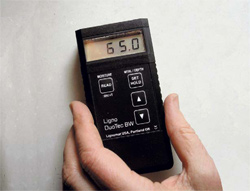 Handheld Meters Show Moisture at a Glance
The quick and easy way to check a floor for moisture hot spots is to use a handheld moisture meter.

There are two types. Pinless meters use radio frequency signals to detect moisture near the surface of the slab. Pin-type meters use electrodes driven into the slab to measure beneath the surface.

Neither type of meter is especially accurate, but both can give you a good idea of the best areas on a floor to perform more precise moisture tests. 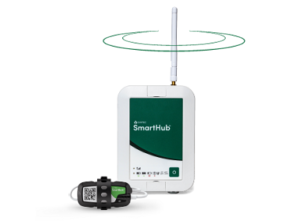 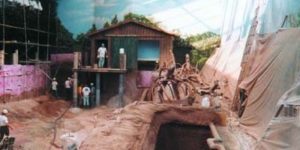 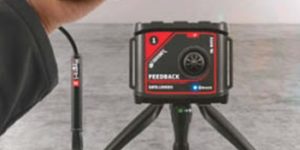