When Troy Lemon the concrete sculptor met up with Troy Wolfiss the home builder, a fireplace of great proportions ensued.

Wolfiss, owner of Artisan Craft Homes, was busily designing his new home, which would also be part of the Home Builders Association of Greater Grand Rapids’ Spring Parade of Homes. Out of the blue, Lemon, owner of Cornerstone Decorative Concrete, called Wolfiss and wanted to show him what he’d been up to. The two men hadn’t seen each other in 18 years.

When Wolfiss saw Lemon’s portfolio, he was smitten. “This is exactly what I’m looking for,” Wolfiss said when he saw pictures of Lemon’s vertical concrete carvings. Just about everything would be custom made, from the light fixtures to the cabinetry, and he was confident Lemon could build the enormous fireplace he imagined for his rustic-style show home. 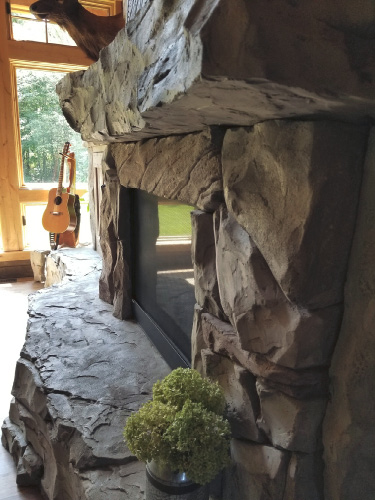 “I wanted a massive fireplace that looked like the house was built around it,” Wolfiss says. And that’s what he got.

With a hearth measuring 21 feet long and a mantle 18 — both resembling solid pieces of stone — “You’d have to build train tracks to get real stone like that into a home,” Lemon says. And then there would be the matter of where to fit the crane needed for hoisting, not to mention the exorbitant price tag.

Lemon credits much of his success to Kingdom Products’ vertical mix which made it “easier to get massive pieces of mud to hang off a wall. I can easily get 3-4 inches up in one application,” he says. A wide mixture of Elements stains from Butterfield Colors was used for color.

Although Lemon didn’t use any real stone for the fireplace, work was still physically demanding. He had to go up and down an 18-foot ladder all day long with buckets of mud and even fell one time — something that has never happened before — and cracked his head good. Still, work was enjoyable because Lemon got to spend time with his favorite apprentice, his now 15-year-old son, Josh. 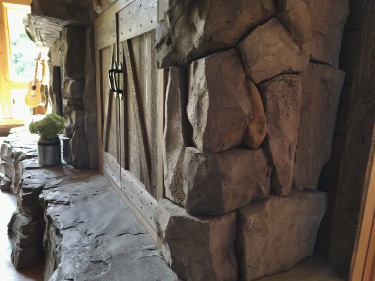 “I did the carving and he did a lot of the coloring,” Lemon says.

Wolfiss says the fireplace is definitely the home’s wow factor. “It’s just completely the centerpiece of the house. When people walk in the door, it’s the first thing they see and they are impressed by its sheer mass and love the detail. Troy has done an incredible job fooling people into thinking it’s all natural stone.”

The annual show featured 72 homes in West Michigan priced from $150,000 to more than $1 million. During its run, some 2,200 visitors were greeted by this jaw-dropping specimen of a fireplace in the house on Hilton Avenue in Lowell, Michigan. 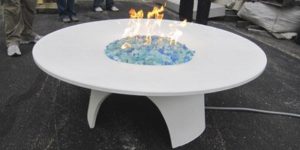 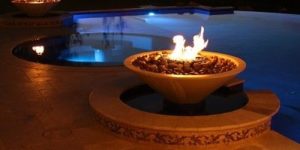