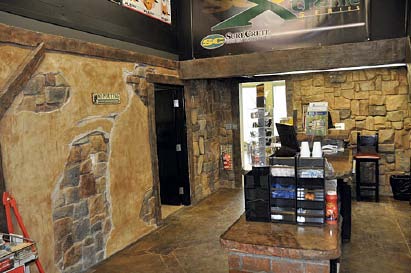 When Brian Graham opened Hard Rock Developments Inc. in Calgary in 2000, he wanted the concrete tool and supply shop to be different from your standard concrete store. “My Dad was a concrete contractor, so when I was growing up, I went with him to concrete supply stores pretty often,” he says. “They always had a similar kind of look and feel — dusty, cluttered, not really appealing to anyone, including a concrete contractor.”

Graham pictured a place where decorative concrete contractors would be comfortable sending their potential customers to see what a product or technique really looked like. “I wanted a store where people could see and touch and feel what a concrete countertop is, for instance,” he says. “A setting where they can see what stained and polished concrete looks like, or where they can visualize a stamped concrete patio in their backyard.”

Now, even the walls at Hard Rock fulfill this purpose — because about half a year ago, Graham had a Calgary contractor install carved vertical concrete in the store.

The artisan he chose was Jason Dyck, owner of Jadee Contracting Ltd. Dyck had been focused on foundation work when the economy slowed down. To diversify, Dyck took some training classes at Hard Rock Developments with the idea of adding overlay work to his repertoire.

While the classes did, in fact, help him expand his business, he also discovered an appetite for learning more about decorative concrete. He started exploring. When he found a site called VerticalArtisans.com, he was hooked. 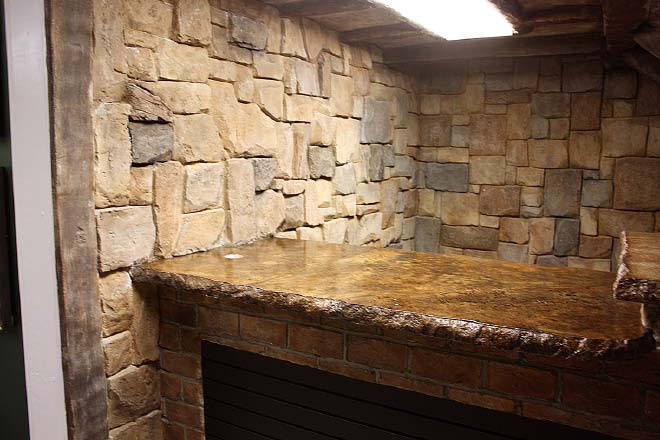 “I took a few more classes, bought some additional tools, and started doing some vertical work,” says Dyck. “I was in Brian’s store one day and we got to talking. He had no idea that I was doing decorative vertical work. I showed him some pictures of a chimney I had done and I guess he was impressed. A few weeks later he asked me if I’d be interested in building some walls in the store to showcase my work.”

“The deal we agreed on was that Jason would do the work and I would supply the materials,” says Graham. “In return, I recommend him to anyone who sees the walls and wants to know more about them.”

The art of the wall

Dyck ultimately put up six of the wall installations, with varied patterns and features. One he made to resemble a rock wall, another to resemble brick, and the others a combination of rock, brick and plaster. All of them evoke old-style traditional masonry.

On the walls in which he incorporated the plaster look he created an appearance of deteriorating plaster, pieces of which have fallen off, exposing brick or stone underneath.

The base material was the same for all six walls: CodeMix, an Alberta-made material obtained from Target Products Ltd. Dyck describes it as “a specially designed base coat that incorporates shrinkage compensators and fibers with natural and manufactured sand.” Often used as a base coat for stucco, the mix dries slower, which reduces cracking and shrinking, he says. 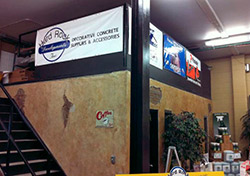 He got the brick pattern by using a flatwork brick stamp, then detailing. “When the material sets up enough, I dig out the faux mortar joints with a pointing trowel. I come back later and use a grout bag to fill in the mortar joints,” Dyck says.

The colors on the walls were achieved with SureCrete’s water-based Eco-Stains. Dyck diluted stains to varying degrees to achieve the subtle differences in color seen in the stone and brick.

“For the color, I usually mix up a few base colors which I dilute with varying amounts of white color. I spray each textured rock or brick and then start adding colors on top to provide depth and contrast of colors. Overspray tends to add depth to the work rather than mess it up. Then I add additional touches with a stipple brush and sponges. Of course you have to pay attention to what you’re doing, and it’s important to step back once in a while for a different perspective, but it’s really a pretty straightforward process.”

Dyck agrees that there is an artistic aspect to coloring the patterns of stone or brick to make them look realistic, but he doesn’t consider himself a particularly artsy person. “I’ve found that almost everything involved with decorative vertical work is pretty forgiving,” he says.

Most concrete contractors or masons already have the basic tools needed for vertical work, according to Dyck. Add just a few specialty tools and you’re ready to go. He says he got pretty much every additional tool he needed by buying a vertical contractor’s tool kit from Walttools.

Graham seems pleased with the results. “Our goal is to present customers with full-sized visualizations of the scope of possibilities in decorative work,” he says. “In this case, it was wall stamping. It’s really a win-win. I can show a customer what a stamped wall looks like instead of handing them a brochure with pretty pictures, and Jason is displaying his work without absorbing the expense of building and maintaining a showroom of his own.”

Scope of project: Build several carved walls in a concrete construction supply store as a means to illustrate to customers the potential in decorative work. Challenge: Complete the work while minimizing the impact on normal store business. 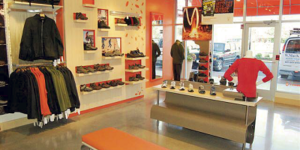 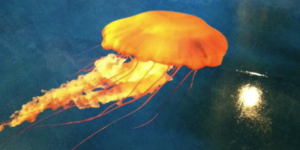