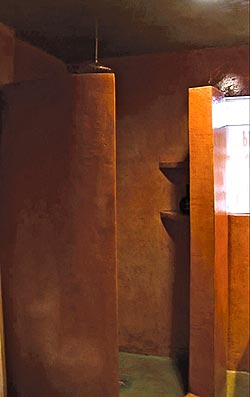 Experts figured Wes Vollmer was ready to climb the walls when he told them what he wanted to do with a microtop overlay. “They thought I was crazy,” says the owner of Alternative Finishes in San Antonio, Texas.

But for Vollmer, who was looking for an innovative application, the question was simple. “If it was tough enough to hold up on floors, why won’t it hold up on walls?” When the mix manufacturer could not think of a reason, Vollmer went vertical.

Vollmer is one of a growing number of decorative concrete craftsmen who are using vertical overlays in highly decorative interior and exterior applications. Many of the jobs are in commercial buildings, such as resorts, hotels or upscale restaurants, where clients need the look of an expensive custom home, but with washable surfaces that are as tough as concrete.

Designs are unlimited. By stamping or carving, contractors can create geometric patterns, complicated forest scenes and even faux dinosaur fossils. A huge range of colors is available using integrals or acid stains.

If you’re in the decorative concrete business, you already know the possibilities of design. The bigger questions lie beneath the surface, and one reason that vertical overlays have been successful is their versatility when it comes to substrates. “I haven’t seen anything I can’t go over yet,” Vollmer says. Substrates that take well to microtoppings include plywood, OSB, and sheetrock, the most common wall material encountered on interior jobs.

Experienced floor overlay installers will find new challenges in vertical work, and they need to be prepared. “He’s going to have gravity that he isn’t used to come up and bite him,” Vollmer says. Gravity is the key difference. There is obviously no self-leveling in a vertical application, but there are door frames, windows and counters to work around. Therefore, there is a difference in the mental approach, the preparation of the substrate and the mixture.

Prepping and mixing
One of the first considerations is the size of the job. For example, an installer facing a large surface area may use a sprayer to shoot material from a hopper while a trowel crew follows behind smoothing it. For smaller areas, applying by hand may be preferable.

Most experienced installers prepare the substrate with some kind of a base coat, a “liquid sandpaper” made of repair mortar, or some other bonding agent. When working with wood or drywall, Vollmer recommends first installing a wire mesh, then the scratch coat, followed by the microtop coat.

Polypropylene or fiberglass mesh nets are commonly used to bridge gaps or cover seams. Expanded diamond metal lath is another commonly-used reinforcing mechanism, especially for wood substrates, which are highly subject to movement. Lath is also used when a holding mechanism is called for with some thicker overlays. Or the wall can be recovered with cement board to make a more durable surface. Some contractors use Glass Fiber Reinforced Concrete (GFRC) to boost a vertical overlay’s durability.

The other divergence from floor applications is in the mix. While products like Flex-C-Ment Wall Mix, manufactured by Yoder & Sons, and Fossilcrete’s Vertical Mix are designed for vertical overlay, products like Miracote’s MPC Microtopping can be used either horizontally or vertically. Vollmer uses Miracote’s microtopping in a slightly thicker mix than would be used for floors, but with a thinner application. He advises the beginner to mix small batches, and make very slight changes, changing the amount of water by just an ounce or two at a time.

Training, as always, is key
As pleasantly workable as these mixes are on an even surface like drywall, all the rules of overlay apply. There are no shortcuts, says Raymond Bennett of Flex-C-Ment. Overlays tend to look pretty easy, especially at the hands of an experienced craftsman. But “don’t try it without training,” Bennett says.

That is why Yoder & Sons offers a three-day certification program. This certification gives the installer some proof of his skills when marketing himself and the Flex-C-Ment overlay system. Bennett also supports an idea that many in the business would like to see take form: an industry-wide training and apprenticeship program.

Besides getting training in overlays, Bennett says, it’s good to know a veteran stonemason and a tile installer in your area. Even though they are your competition, they’re also full of tips on creating a decorative exterior wall or a kitchen backsplash.

Hopefully they won’t hold it against the decorative concrete installer that he has all the competitive advantages. Vertical overlay mixes are far more cost-effective than tile or various stone or brick applications, in both time and materials. Not only is concrete less expensive, there is a far greater range of design and color possibilities due to the very workable nature of microtopping mixes, which has led to unlimited artistic and architectural design potential. “It has opened up even our eyes,” Bennett says.

Samples are essential
The wide array of designs is why samples make good marketing tools. Vollmer said he uses large panels, 5-feet square, to help clients visualize how the finished work would appear on their property. A one-foot sample is not large enough to make the point, he says, nor is it large enough to include flaws. And of course, even the best work will have a few flaws. “I like to point out the inconsistencies up front so there are no surprises,” Vollmer says.

Stan Pace, a concrete artisan and paleontology buff who turned his skills and passions into the company Fossilcrete, created his own formula to sell with his stamps and overlay systems. His Vertical Mix is designed to take deep impressions and reveal fine details from his stamps, which include an array of genuine impressions of dinosaur fossils, animal tracks and plants, along with stone wall impressions from faraway places such as China.

Pace, who started as a contractor creating boulders, walls and fountains in Florida before moving to Oklahoma City, is probably the only American decorative concrete artist who has traveled to China on to take an impression off the famed Great Wall. That stamp has been unveiled, but has not yet been offered for sale on the company’s Web site.

For a more detailed look at vertical overlay applications, see the Feb./March 2004 issue of Concrete Decor (Vol. 4, No. 1). 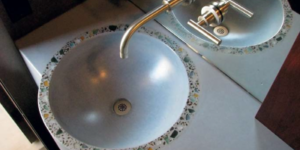