The world’s great deposits of synthetic rock were once concentrated in zoos, theme parks and the occasional museum exhibit. But times have changed, and these days, faux rock is cropping up all over, from backyard pools and spas to shopping-mall waterfalls.

“The demand for artificial rock is booming just about everywhere,” says Bruce Riley, managing director of RicoRock LLC, which uses fiber-reinforced concrete to manufacture modular rock waterfall kits. “Only in parts of Southern California has it peaked in popularity.”

But if someone wants to put in a sandstone waterfall, a lava-rock barbeque, or a granite grotto, why not use real rock? There are a number of reasons why faux is so popular.

While faux stone is fabricated from a variety of materials, including plastic, fiberglass and urethane, concrete is widely regarded as the most durable and least costly way to go — and many say the most realistic.

Polymer-modified concrete or glass-fiber-reinforced concrete are generally used for synthesizing rock. Some contractors prefer to create their own cementitious mixes, while others opt for commercial faux rock systems, which might include a filler mix, 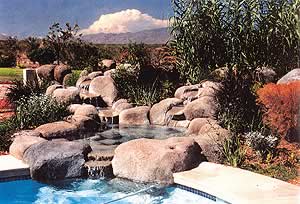 a top coat, a texture coat, colorants and sealers.

Faux rock formations can either be sculpted and textured by hand or cast off-site using molds taken from real rock.

Building a framework
Hand sculpting offers the greatest opportunity for creativity and usually costs less than casting. If done poorly, though, it’s the method most likely to result in fake-looking rock. 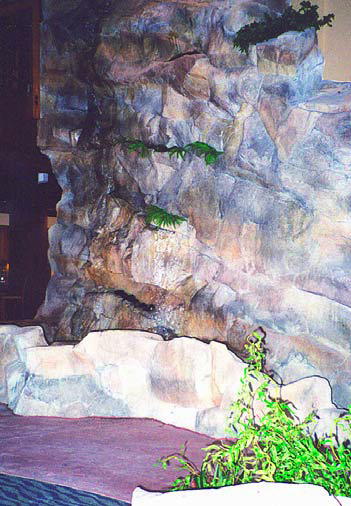 demand for faux rock in Southern California, according to Riley, is due to the plethora of fake-looking rock there. “There’s way too much poor-quality, rounded, mushy rock shapes out here,” says Riley. “Homeowners call it ‘dinosaur dung.’”

Al Shultz, co-owner of Boulder Crete Inc. in Maple Ridge, British Columbia, avoids phony faux syndrome on his rockwork jobs by employing an actual artist to do all the sculpting and coloring. “He pretty much came right out of sculpting school,” says Schultz. “We keep him busy.”

The underlying framework upon which sculpted rock is built can be made in a variety of ways. Rebar and metal lath are commonly used, and some contractors insist on them for all formations taller than four feet. But in some situations, rock made from polymer-modified or glass-fiber-reinforced concrete can stand on its own perfectly well.

Tim Phelps, owner of Phoenix-based Boulder Image, which manufactures a lightweight faux rock product called Techstone Systems, has a customer who specializes in building faux-stone doghouses made entirely of concrete. “He takes an inflatable bladder, pumps it up, pours our concrete filler mix on it, puts our lightweight finish over that, lets it dry, deflates the bladder and yanks it out,” say Phelps. “Structurally, all that’s there holding it up is the filler mix, but it’s concrete and it’s very strong and durable.” 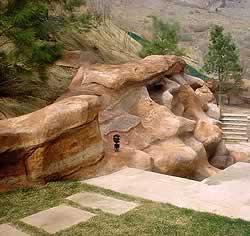 JPJ Technologies has faux rock training centers in Oregon and Tennessee. Among the techniques the company teaches for making temporary forms for synthetic rock is the use of recycled materials, including stacks of rubble, chunks of Styrofoam, bags filled with cans or bottles, and cardboard appliance boxes cut, taped and glued into shape. “We once did a 175-foot granite wall using used tires stacked seven feet high, draped with expanded metal lath, then shot with gunite,” says Jim Jenkins, JPJ’s president.

When the basic form is in place, multiple layers of coating are applied to build the rock.

A rule of thumb says that the closer people will get 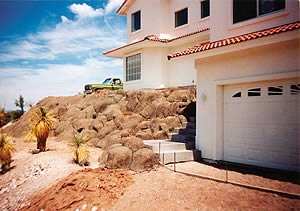 to the rock, the more realistic it needs to appear. Shotcrete alone might be the only coating needed to create a rocky landscape in a gorilla cage if only the gorillas will see it up close. But if human primates will be crawling on it, a finish coat would be warranted.

Rock textures can be achieved with stamps or rubber skins molded from real rock and hit with a release agent before use to ensure a clean parting of ways between concrete and imprinting tool. Improvised texturing tools such as tin foil, brushes or sponges also work. In western Canada, where granite is much in demand, the faux rock artist employed by Schultz has found that sea sponges can produce a nice granite-like texture.

Spaces between rocks, fissures, strata lines and other recesses can be carved using trowels, screwdrivers or other common tools. Careful attention to the nooks and crannies can enhance the appeal of faux rock tremendously, but that’s a point that gets overlooked all too often, says Rick Smith, of Richard Smith Custom Concrete in Los Angeles.

“Nobody puts deep enough cracks or straddle lines or rock separations,” he says. “They just put scratches, and there’s no interest there. The artisans I learned from taught me to build to the shadows. No one really cares about the face value of the rock, but everybody’s really interested in what’s in the cracks and crevices, or what’s around the corner. That’s what made Disneyland so famous. You walk around one rock and all of a sudden you’re in a whole new world — there’s Frontierland!”

Casting from the real thing
Molds made from real rock can capture every detail of the original — even the lichen — and castings made from these molds offer the most authentic rock simulations you can get. The molds, or skins, are made by coating a rock with silicone or rubber, which is peeled away after it dries.

Panels or stand-alone boulders can be cast from the molds, typically using fiber reinforced concrete for its strength, lightness and flexibility. After the panels are anchored to a framework, joints are mudded and the whole thing colored.

Panels may vary in size from about 2 x 3 feet up to 7 x 7 feet, and weigh anywhere from 80 to 600 pounds. They can be sliced and diced for variation. “You can cut them up and just basically manipulate them like a puzzle so you’re not seeing the same repetitive pattern,” says Mike Norton, manager of the custom rock division of Colorado Hardscapes.

Boulder castings usually range in size from 12 inches long to 8 feet long. They can be backfilled with concrete or plastered on the inside to beef them up. 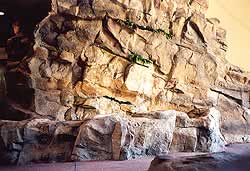 Since nothing ruins the illusion of solid rock quite like a hollow knock, contractors often backfill cavities with concrete. “When we’re doing exhibit work for aquariums, zoos or anyplace where the rock comes in contact with the user, they like to have it solid-filled so it has a dense sound to the knock,” says Bob Wallace, director of sales for St. Paul, Minn.-based Custom Rock, which manufactures and installs panels and boulder castings.

Creating effects with color
Integral colors are sometimes used in faux stone, but contractors more often use acid stains or acrylic paints. Air sprayers, brushes and sponges can be used to apply the color. The spray-on-sponge-off technique is popular. Layering of colors is the norm, since any real rock will have multiple colors or shades going on. Some artistically-inclined contractors say the most realistic effect comes from putting the darkest shades in the depressions and lightest shades on the high points. Some contractors like to add a final antique coat.

One of the more unorthodox coloring techniques employed by David Long, president of Lakeland Co. Inc. of Coeur D’Alene, Idaho, involves following freshly applied acid stain with an open flame. “You hit it with a weed-burning torch and — boom — it sets up and stops running,” says Long. It also creates an interesting heat-baked effect, he says. 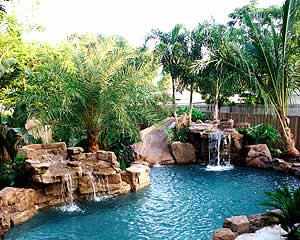 Waterproofing, sealing and maintenance
Some contractors seal their faux rock and recommend resealing it every few years, but the practice varies from contractor to contractor. There’s no argument about the need to waterproof water features, though. Plastic liners are generally set beneath the cementitious surface, and waterproof coatings are used too. Waterproof coatings can be especially handy in serpentine channels, tiny fountains or other tightly-squeezed spaces where it would be difficult to lay a liner.

After completing a faux-rock job, a lot of contractors spend a little extra time with their customers discussing maintenance. When Colorado Hardscapes finishes a project, the company presents the customer with a job-specific maintenance and operation manual covering everything from plumbing to resealing.

With strong interest in synthetic rock among both commercial and residential customers, plenty of opportunity exists these days for rock builders who go with faux.

“You need a waterfall like you need a hole in your head, but more of them are being installed then ever before,” says Jenkins. “The demand for synthetic decorative rock and decorative concrete is so high it’s not being met with enough installation. So this is a really great time be a contractor.” 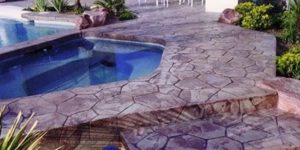 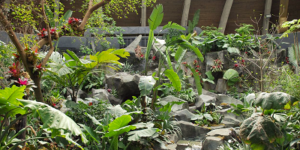 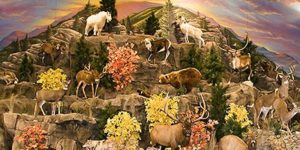