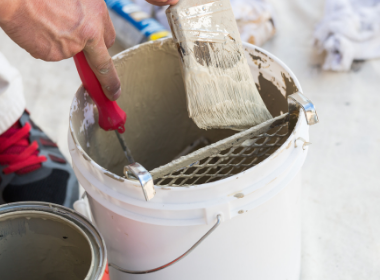 Getting a college degree was a difficult process for me. While academics weren’t my strongest suit, I knew there were answers to making a good living hiding in those textbooks. There were also some answers behind what the professor was preaching to me from a podium in the classroom.

Mom and dad helped me with room and board my first year of college. However, after that I was on my own. Had I not asked about painting my dorm room walls that first year in college, I don’t think I would ever have been introduced to a construction trade when I really started living on my own that next summer.

At an early age, working with my hands was always a source of income. Weeding a neighbor’s flowerbed, mowing lawns, painting a fence, and washing windows and cars all gave me immediate income along with some degree of satisfaction.

In college, I didn’t really have to think about “how” I was going to make ends meet. I just knew I had to find people that needed my help. That came easy for me. I was polite. I did what I said I was going to do. Also, I listened to people. However, I also liked making things better regardless of the type of work I was doing.

Painting my dorm room was easy work. Time-consuming, but easy! When the residence hall office administrator stopped by to see how my little dorm room project was coming along, my work must have impressed him. I suddenly found myself making extra money that freshman year of college painting dorm rooms for other students.

When that first summer rolled around, I was offered a job on campus. And believe it or not, it included free housing. That was a no-brainer! The catch was that I would be working as a “helper” for a union journeyman that the university was hiring to do work in the dorm complex. Still in awe that they offered free housing, I jumped at the opportunity. What happened next didn’t get my full attention until some years later.

Student helper was nothing short of miserable. I was on my hands and knees most of the time doing the so-called grunt work. If that wasn’t bad enough, journeyman yelled at me occasionally for not doing the job right according to his perspective. His instructions made sense, but it wasn’t fun receiving criticism for a job the dorm administrator had been previously thrilled with me doing. Regardless, I was making money and I was getting free rent, so I did what I was told.

Later that summer, I started getting additional work off-campus helping a licensed contractor (the brother of that journeyman) with various residential and commercial projects around town. I’d sometimes make $200 in one a weekend which was about what I made in a week with my job on campus.

Throughout the rest of my four years in college, that weekend work became a steady source of income. I later got free rent as a “house manager” for the fraternity I had joined, but the weekend work was always there for me.

Those two journeyman brothers and even some of their retired union colleagues quickly became a second college classroom for me. I had unintentionally been learning a trade while I was getting a business education in college. At the time, I was looking at the work opportunity as a steppingstone to some unknown destination in the future. However, it took me by surprise to discover that I’d actually become a tradesman with an extremely marketable set of skills.

Now I was a college graduate and trying to decide what direction to head off in search of a career. I was already making a good living as a painting and decorating contractor. That voice of instruction often yelled at me whenever I thought of doing something half-ass. However, I still had people lining up to pay me handsomely for my work.

Funny enough, it wasn’t until I was working nights on a legislative chambers project inside the California State Capitol that I decided to become a licensed contractor. I did that because California was cracking down on unlicensed contractors not in compliance with new state laws. Legislators had created these laws to protect consumers and, yes, contractors also. 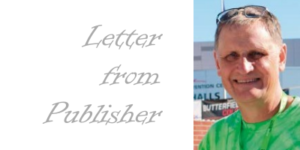 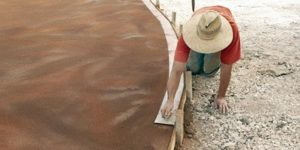 How to Get Started in the Decorative Concrete Industry

From the Publisher’s Desk Feb/March 2015