Tell us a bit about green beam lasers. How are they different?
Red beam line lasers have been standard on the jobsite for years, but newer green beam lasers are up to four times brighter than red beams. This provides the best visibility in bright ambient light conditions.

How can a builder know whether a red or green beam is best for a certain job?
Working conditions and environment are the biggest factors in choosing between red or green laser products. In many cases, both the red and green beam lasers will do the job, but there are instances where the green beam offers advantages. That includes applications requiring greater distances and jobs where ambient light is a consideration. In these two instances in particular, the green beam is superior because it has higher visibility to the human eye.

If pros don’t need that extremely bright line that can go the extra distance, a lower-cost red line laser can be really attractive. However, green beam lasers can do everything a red laser can, so the appeal of green beam lasers that can handle any task on the jobsite, regardless of ambient light pollution, is generally much higher.

Why are green lasers so much more expensive than red ones?
Green diodes are more expensive because there’s a limited number of suppliers, and there’s lower demand compared to red diodes as the industry becomes more familiar with the new technology. On top of that, a smaller issue is that green diodes generate more heat and consume more power, which presents some challenges. However, today there are new design developments like Bosch’s VisiMax Technology which automatically adjusts power consumption, making up for the extra juice needed to use green diodes.

When did green laser tools first start showing up on the jobsite? What tools were they?
Green line lasers are not new to the jobsite. The difference now is that technology allows these products to be much more affordable. Diode technology has both improved, dropped in price and become accessible to a wider audience. Tools that incorporate a green laser are about 25 percent more expensive than a comparable device with a red beam depending on make and model. Traditionally, a green laser draws more power than a red laser. Over the years, laser technology and power source improvements have made green option more practical for virtually every laser option.

I assume that green lasers have a longer reach because it has a higher frequency than red lasers, but why are they only coming up now?
The green beam is up to four times more visible to the human eye than the traditional red beam. And while that’s true for all interior applications, it’s especially useful in bright ambient lighting. Due to the high output of green lasers, they operate at higher temperatures, making the diode more susceptible to ambient heat like direct sunlight, for example. This heat can damage the diode.

Bosch laser levels incorporate VisiMax Technology to address this issue. This exclusive technology constantly monitors the laser’s temperature to ensure diodes maintain their operational integrity and deliver the best line visibility while preserving the life of the tool.

What are some other laser-related advances coming out in the near future?
Here’s a feature that’s exclusive to Bosch laser products: VisiMax Technology provides the brightest line possible for the conditions by constantly monitoring the laser’s temperature. That means users get the maximum beam brightness they need based on the light in the room, automatically adjusting the power.

This does two things: First, by constantly monitoring the tool’s temperature, VisiMax protects the laser diodes from overheating, which extends the life of the tool. Second, by automatically adjusting the power, it extends the battery life for longer use. It’s a win-win. 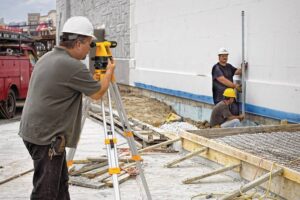 Dewalt DW090PK – Keep It On the Level