Everything about the Brawl in the Fall at the 2016 Concrete Decor Show in San Diego was hot, hot, hot — from the record-breaking 100+ degree heat to the sizzling entries that shaped up in the outside lot during show time.

Now in its third year, the competition featured five artisans and their teams vying for the honor of being named top Brawler for 2016. Once again, the purse contained $10,000 worth of products, equipment, prizes and cash to be shared by the top three teams that got the most votes.

Show attendees received a ballot as they entered and were encouraged to visit the competition area outdoors to watch and question the artisans at work. Cast votes were tallied Thursday to help the judges pick the top three winners for 2016. The judges were Bent Mikkelsen of Concrete Decor, Jim Petersen of the Concrete Network, David Blasdel of Butterfield Color and other industry experts who want to remain anonymous.

Deco-Crete Supply once again emceed the event and awarded the prizes.

Rick Lobdell, an artisan based in Nashville, Tennessee, and a two-time Brawl contender, says the significance of the Brawl is far reaching. “It’s a great way to show beginners and the industry overall how far you can take decorative concrete,” he says. “We don’t get many opportunities to do that in the public eye.”

Whereas he concedes that it’s very satisfying to get your name out there and to show your peers what you do in your own unique way, the Brawl goes beyond that. “It shows what we are capable of doing as an industry. That’s the bigger — and more important — picture to me.” 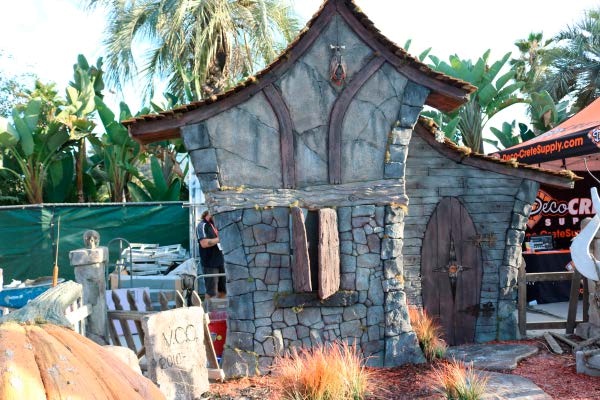 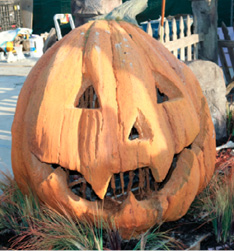 A key element to help the judges choose the winners for this year’s Brawl involved seeing if competitors could mix different materials and techniques while also being creative. Dion Battles won the battle in San Diego, with his Halloween-inspired concrete creation that took everyone back to their childhood and garnered him first place.

Battles’ inspiration was to “reach into everyone’s inner child,” he says. To achieve this, he used lumber to build the substructures including the entry gates, fence posts and the witch house. He used rebar and lath to create the monster tree and the ghoulish jack-o’-lantern. He used Type-S mortar and cement as the scratch coat and structure coat, and KirtBag Carving Mix as the carve coat. 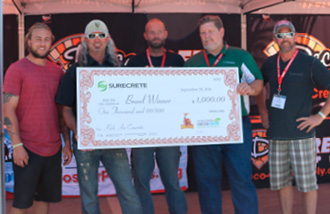 Although it looked good in standard gray tones, the display was colored with flat exterior latex paint with varying techniques from spraying, air brushing and sponging to brushing and flinging. “People thought it was finished before it was even painted,” says Battles of how impactful his creation was.

Several people viewing the installation remarked that it reminded them of Disneyland; others cited “The Nightmare Before Christmas.” Either way, a childhood fantasy was exactly what Battles had in mind. His creepy creation, which took three and a half days to make, aimed to captivate people with its abstract and whimsical nature.

For the finishing touch, Battles and his team added artificial grass, erected wooden fence panels, mixed in Halloween accents, installed a smoke machine inside the monster tree, turned up the tunes that belted out of the pumpkin and let the lighting do its magic. 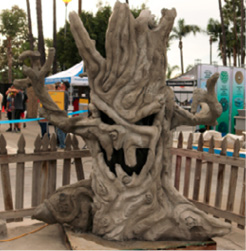 Vertical Concrete Creations backed the Brawl entry on its own without a major sponsor and provided almost all the project’s materials, including 79 94-pound bags of Type-S Mortar. KirtBag Carving Mix, a company Battles co-owns with Jeff Kirt, supplied 65 15-pound bags of its high-performance carving mix.

This was Battles first time participating in the Brawl in the Fall but he has sponsored previous artists through KirtBag. He was assisted by Kirt, Toribio Gallues, Kevin McDonnell and his son, Kameron Battles. “I couldn’t have pulled off this scale of project in such a short time without this incredible crew! We worked like clockwork together,” Battles says.

The first place winner of last year’s Brawl in Indianapolis with his depiction of a Louisiana swamp, Keefe Duhon turned his attention in 2016 to bring awareness to the horrors of modern-day slavery. 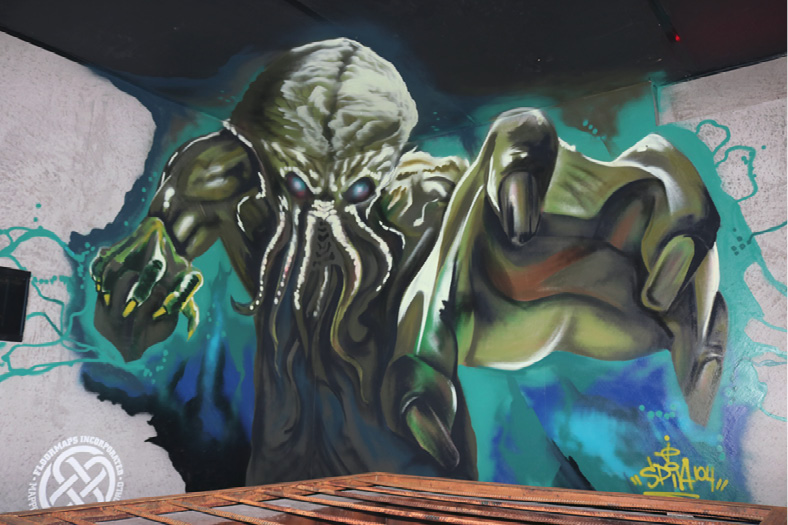 Inspired by an incident involving a 16-year-old girl from his neck of the woods that was almost abducted, he says, “No one is immune to being taken. It happens everywhere, not just in Third World countries.” In fact,

he adds, it’s more common than drugs, reportedly the No. 1 money maker in the world of crime.

Central to his display was a concrete overlaid structure designed to look like an old hidden room under a large bridge or in a subway complex. It was coated with Surecrete’s Elasto-Shield, a waterproofing liquid membrane. Surecrete’s WallSpray was then applied as the scratch coat and covered with Surecrete’s microtopping overlay to create a distressed look. Hands cast with Polytek Hydrogel grasp prison bars. Graffiti, drawn by Eugene Ortiz and Jaime Reyes, dominates the walls.

Inside, an octopus-like creature with far-reaching tentacles looks like it’s trying to grab victims while a jarring video about human trafficking plays on a monitor and loud music and haze pumps through the room. In the middle of the room, there’s a barred shaft with an image of a trapped young girl at the bottom.

Members of Duhon’s team included Nate Morgan, Brandon Myers, Danny Dupre and Kim Duhon. Rachel Knigge of Floormaps provided the stencils for some of the lettering and the image of Clint Eastwood.

A first-time Brawl participant and third place winner of this year’s Brawl in the Fall, Kevin Brown of KB Concrete Staining decided to take the plunge and present his talents firsthand by creating an underwater coral reef scene. 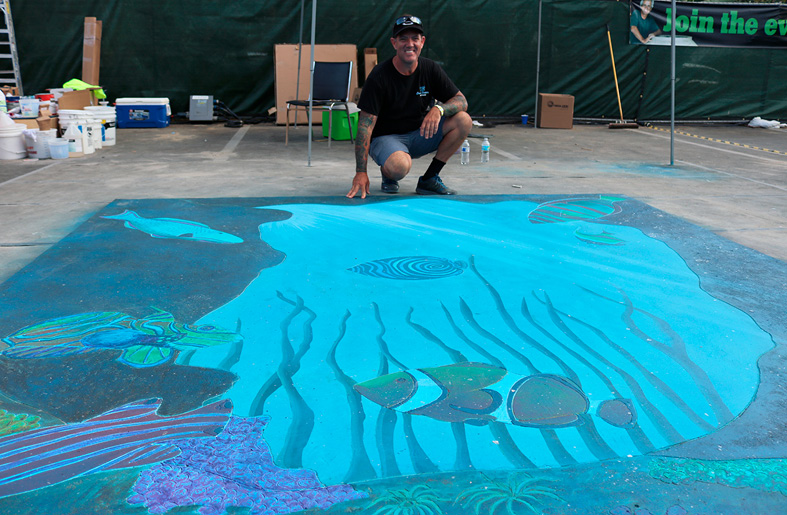 While he has been in the decorative architectural concrete business for 30 years, he has run his own business for the past six years and now mainly specializes in exterior and interior staining.

The idea for his project came from collaborating with NewLook International, a Salt Lake City-based company that sponsored him, and Allyson Wong, an artist who drew the group-inspired design and made the concept teem with life. Wong, Brown and his team all took part in applying the design to the concrete. 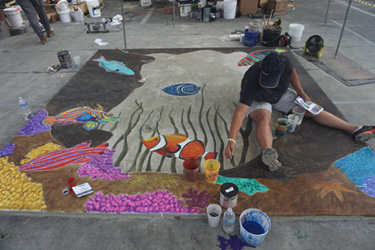 “The hardest part of the project was the decorative cutting and engraving,” says Brown, with the bulk of that work resting squarely in his hands. He attempted to make the scene under the sea look as realistic as possible while still adding as many different textured elements as he could.

The decorative cutting and engraving tools he used were mostly from Engrave-A-Crete while the etching, staining and sealing products were from NewLook International.

As a first timer, Brown says he expects to be back in two years as he loved the competition, relished the competitors and appreciated everyone he connected with during the event. “I had a great time,” he says.

Brown has not won any awards in the past but is extremely passionate about his work and has contributed to articles that have appeared in Concrete Decor magazine and been posted on the Concrete Network. 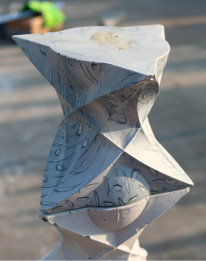 Brian Adams, a former designer who now owns ArchLab 333, is very passionate about interior design and architecture. As one of the five contestants in this year’s Brawl in the Fall and a first-time competitor, he was excited to have the opportunity to present his functional geometrics. He was assisted by Jon Bell, who was in the competition last year.

Adams specializes in geometrical columns and lamps that are structured in such a way that they don’t need rebar for reinforcement. Instead, he uses the Steelike concrete mix design from Kulish Design, a company based in Northern Virginia that sponsored him at this year’s competition.

Unfortunately, due to time constraints, a limited crew and his inexperience in a Brawl setting — not to mention the exhausting heat which took quite a toll on him — Adams says he was unable to reach the full height with his columns and presentation. The Steelike mix, which has a revolutionary 24,000 psi, had to cure for 24 hours before he could pull it out of the mold, leaving little time for anything else.

“Although I was a little disappointed I didn’t get to show the columns at full height and scale, it just doesn’t do any justice when they’re only a couple feet tall,” Adams says. “I won’t ever let something like that happen again.” In retrospect, he says, he should have used a faster-curing mix which would have allowed him to create a table and even a lamp to accompany it to showcase his patent-pending geometrics.

Even though his project was incomplete, Adams says he has a lot of new designs in the works. He plans to get his website up and running soon where he can feature his functional geometric designs in a manner which they deserve.

Due to a last-minute cancelation by another contender, Lobdell found himself a contestant in this year’s Brawl with less than a week’s notice. He was also one of the workshop leaders for the 2016 Concrete Decor Show’s pro bono project at the Bannister Family House so he was strapped for time all the way around. “I was teaching a class and didn’t have as much time as everyone else to put into my entry or to plan it in detail ahead of time,” he says.

His solution was to do a design he’s well known for: 3-D vines and a central well instead of a pond. Rather than fish, which he says are time consuming to create, he included “a reaching hand to give the scene a scary, theatrical look.”

Deco-Crete donated its house brand solvent-based exterior dye. Fellow workshop leader Warren Ness, who co-led the rock sculpting workshop along with Troy Lemon, pitched in as a team member, along with one of his workshop students, Vincent Cathcart of VC Studio Inc. “Vince was a huge help,” Lobdell says. “He was awesome as he also has a background in art so he helped me out with the shading.”

Lobdell, who competed in the first Brawl in Fort Worth Texas in 2014, says his project was based on actual jobs he had performed over the years. “Time management really factors into this competition,” he says, because in the “real world” that’s a really important element you’ve got to master.

He says he would “absolutely” enter a future competition and is eyeing Ness as a partner. With Ness’ vertical prowess and Lobdell’s handle on horizontal applications, he’s certain they could be serious contenders next time around. 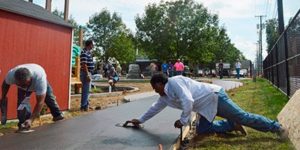 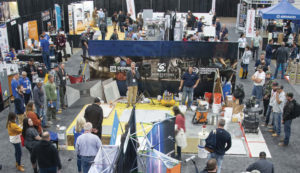