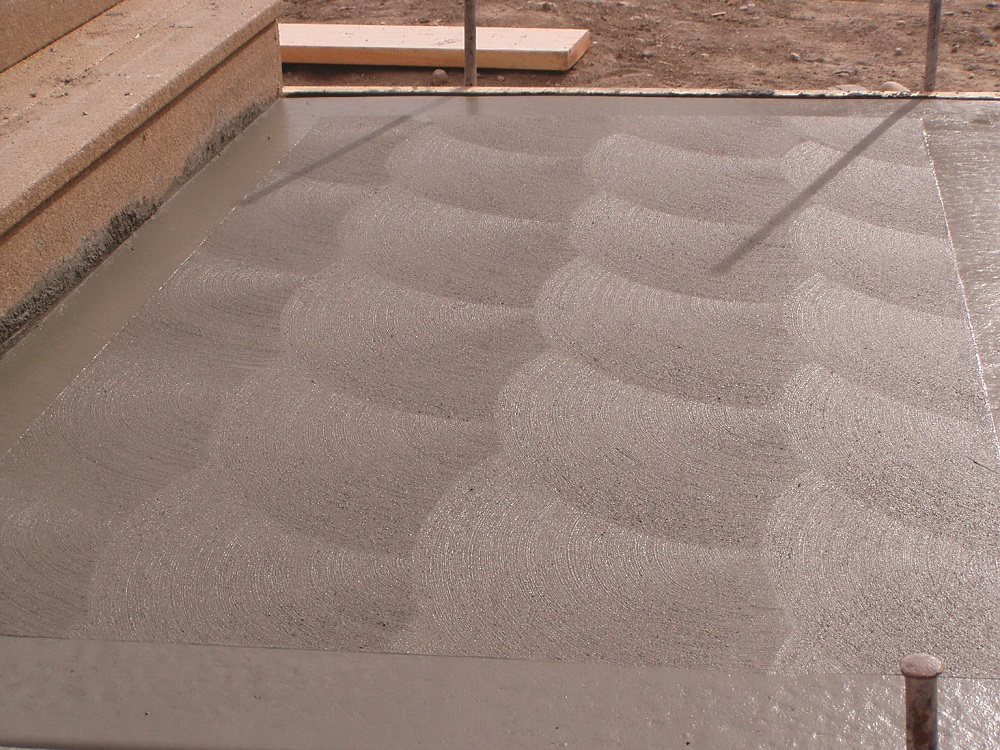 Applying brushed and broom finishes on concrete began as a practical matter. Contractors needed a method to aesthetically “put a bite” on smooth concrete so driveways, pool decks and other surfaces wouldn’t be too slippery.

But today, as contractors increasingly seek new methods to decoratively finish concrete, brushing or “brooming” the surface has evolved into a fairly uncomplicated, yet versatile, technique to create unique artistic applications.

“The possibilities are endless,” notes Devin Johnson, vice president of Architectural Concrete and Design Inc., the Salt Lake City-based company that serves as the Utah franchise for Bomanite Corp.

“It’s more or less artistry,” he adds. “It’s like putting a brush in an artist’s hand and letting him create on a canvas … except this is on concrete. You pick a pattern and go with it. People just keep taking it a step further and further.” 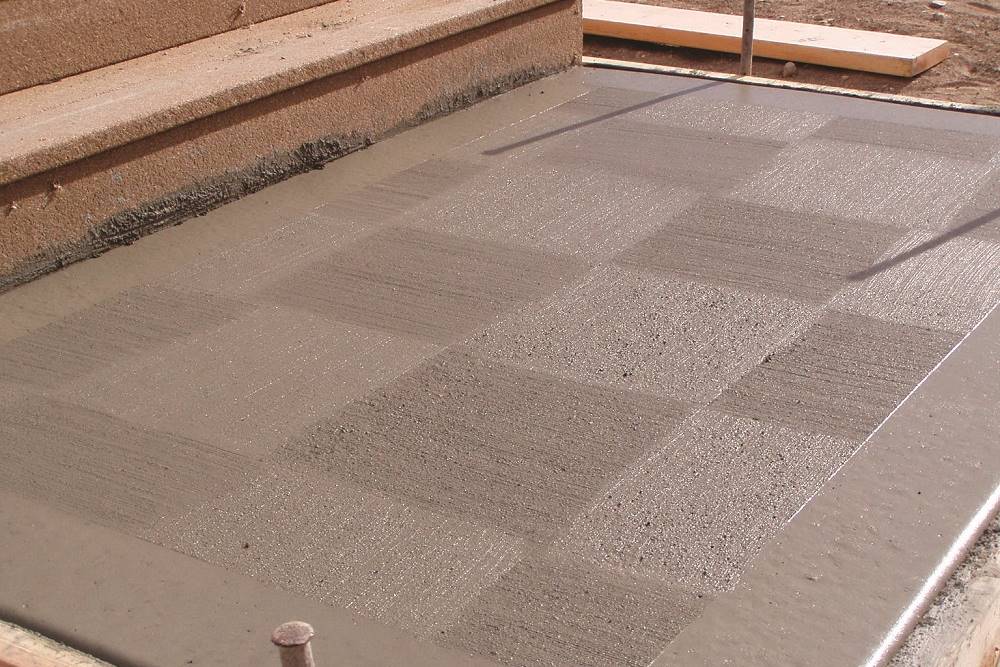 “You can really get creative with broom finishes,” Levig says. “A good thought to keep in mind is to mix applications to get different looks. You can mix the broom with stamps or with stains and different colors. There are all kinds of things you can do when you get creative.”

In fact, Levig adds, brushing can part of what he calls a “budget decorative” project. “For the long spans of concrete, like a driveway,” he says, “you just color it and broom it. Then you do the borders with a stamp.”

The basics of creating brushed finishes are fairly simple — brooming concrete is not that much different from sweeping the floor with a broom. At its most elementary, contractors simply push or pull a broom across the concrete while the pour is still soft.

The finished look can vary widely, however, depending on how soon the brooming is done, the texture of the bristles and whether the concrete surface is wet or dry.

The tools for the job are simple. There are essentially two types of brooms — those made of horsehair and those made of synthetic materials such as nylon. Brushes come in either hand or push varieties.

In recent years, brush manufacturers such as Marion Brush Co. in Iowa have developed systems specifically for brooming concrete. Marion’s handleless finishing system, the Chameleon Trac II, for instance, allows contractors to finish pours that are awkward and to reach farther than traditional brushes extend. The system is equipped with color-coded brushes of different sizes and textures, an angle adjustment device and an adaptor to convert to a twin-brush system. 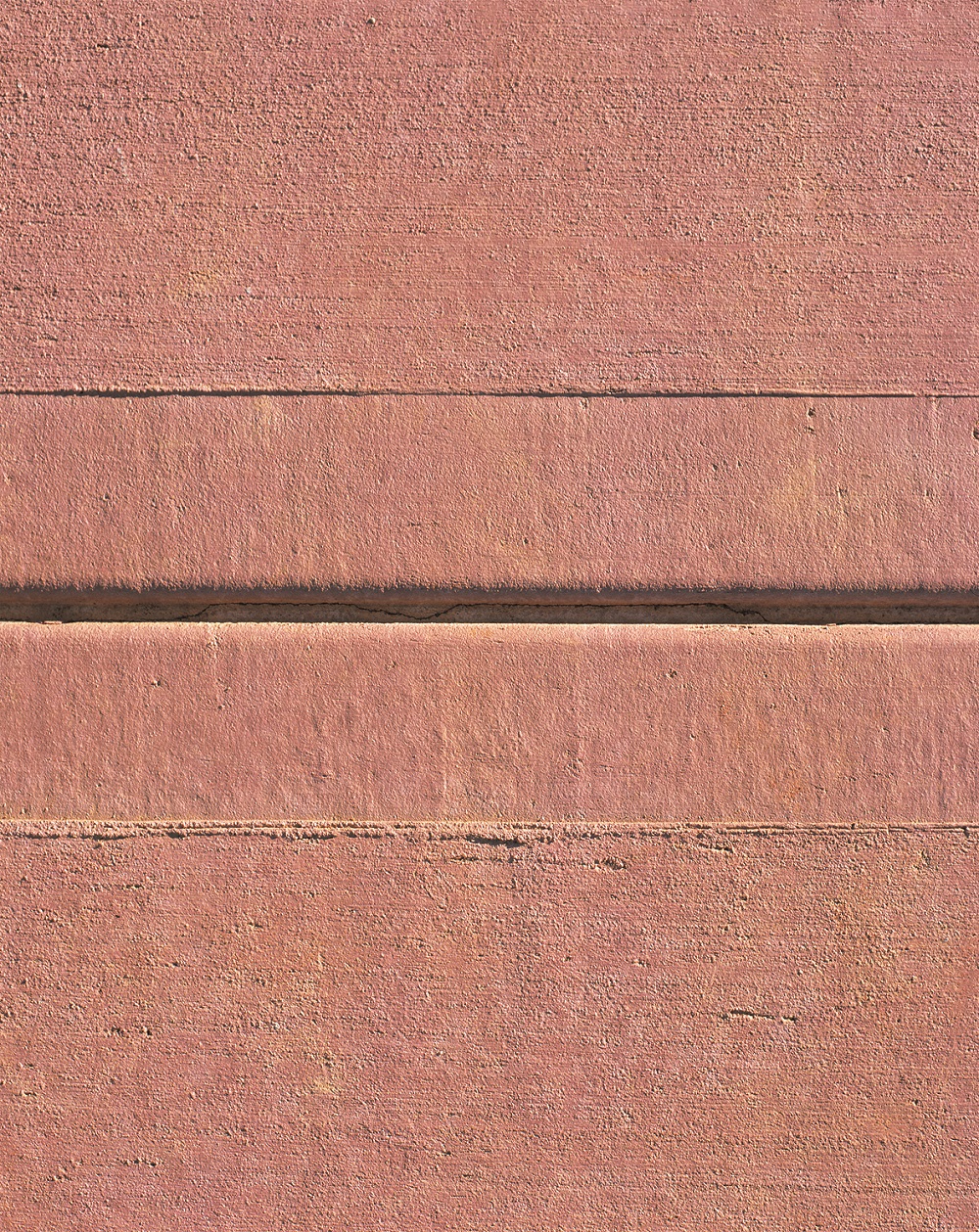 “Normally, you can’t go wider than about 30 feet with a brush,” notes Doug Rouse, Marion’s general manager. “But with our handleless system, you can go as far as 200 feet if you want and still get consistent and even strokes. The beauty of the system is that you only need to take one pass to get what you want. That doesn’t happen in traditional brush systems.”

The moisture content of the brush is also critical to creating various looks. A damp, stiff- bristled broom, for instance, can produce a coarse texture, perfect for heavy traffic areas and sloping surfaces. Dry, soft-bristled brooms are best suited for creating medium to fine textures.

“The general rule of thumb is the stiffer the bristles, the coarser the finish,” notes Levig. “But, really, it all has to do with timing and when you get on the concrete.”

Therein lies the rub, say contractors. Getting on the concrete too early can create a weak surface; getting on it too late can mean the strokes won’t make the desired indentations.

Knowing when the concrete is ready to be brushed is largely a matter of “acquired touch,” contractors maintain.

“I touch it,” notes Levig, who is based in Fairfield, Calif. “When I push hard and barely feel the movement in the cream, I know it’s ready. It’s something you really learn from experience.” 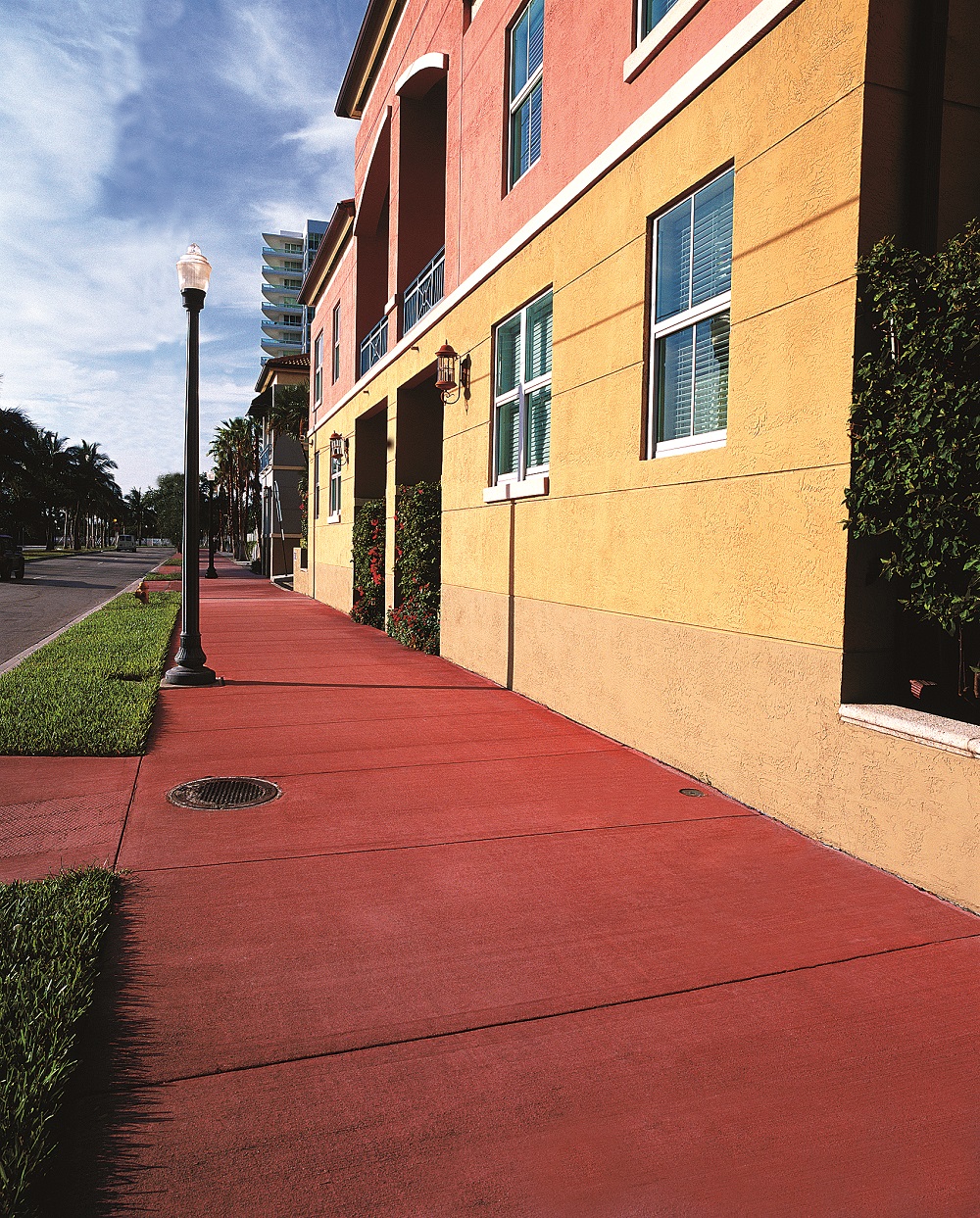 “I do the ‘finger test,’” echoes Johnson. “I push my finger in and if it’s hard enough and my finger doesn’t leave an imprint, then it’s ready. Once the concrete is troweled, it really needs to dry enough so when the brush is pulled over it, the surface doesn’t come off.”

The readiness of the concrete can also vary from region to region and with the technique used.

“The weather is a big factor,” notes Rouse. “Contractors on the West Coast may broom before those in Iowa. Generally, if the water bleeds off the top, the concrete is ready.”

A critical factor to ensuring the desired effect is keeping the brushes clean. Whether synthetic or horsehair, the bristles should be rinsed frequently to keep the tips clean.

Rouse recommends dipping brushes into a 5-gallon of bucket of water, then shaking off the excess moisture, between each stroke. 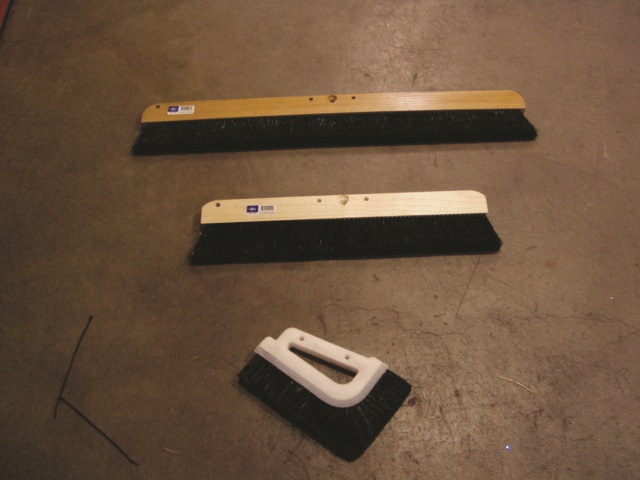 “You should wash as you go,” adds Levig. “You don’t want a dirty brush. You’ll ruin the cream and remove part of the top.” Before he brooms, Levig always moistens the surface of the concrete to ensure enough moisture exists for his technique. That can be done by misting the surface of each section before brushing (being careful not to use too much water) or can be a byproduct of dipping the broom in water to clean it before each stroke.

Johnson, too, cautions against adding any dirt onto the concrete.

“You don’t want any build-up,” echoes Johnson. “It can be disastrous to your look.”

Also disastrous to the look is inconsistency in brooming different areas of the pour. In brooming, timing is everything, contractors like Johnson and Levig maintain.

“You have to be sincere about what you’re doing and pay attention,” Levig cautions. “You have to have the same pressure on the broom throughout. That might mean you may have to apply different pressure at the end of the job than you did in the beginning because you’re doing it at a different time of the day and the conditions are different. You want the whole slab to look the same.

“You also have to be careful from one truck to the next,” he adds. “Where the two trucks meet, you may have to go lighter on one side and heavier on the other. You have to use your eye and be aesthetic. It’s all common sense and experience.”

What to avoid when you’re brooming

Contractors like Ray Hight with California-based Tom Ralston Concrete cautions that ensuring consistency in brooming, especially with colored concrete, can be tricky. 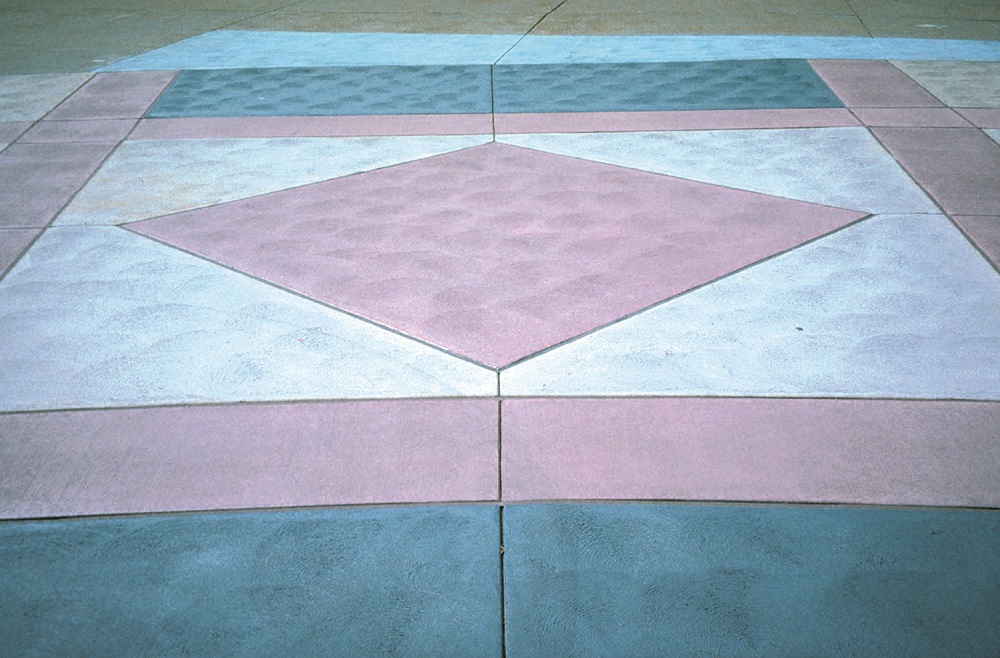 “We got away from brooming a few years ago because it can change the shade of the concrete and create very uneven colors,” he says. “Even if there is no color in the concrete, you can get different shades.”

Depending on the conditions of the pour, admixtures can enhance the brooming possibilities by buying the contractor some time and making the pour dry more evenly. In cold weather, for example, adding calcium chloride to the pour can speed the hardening process, allowing contractors to get on the concrete faster and coordinate the timing with the second pour.

In the end, however, it’s all about the look. The broom finishes and the effects taht are possible are limited only to the contractors’ imagination, say those in the field.

Some of the possibilities

And when contractors combine their broom finishes with joint patterns, acid washing, sandblasting and other decorative concrete techniques, the door to creative possibilities opens even further.

In the hands of a true artisan, brushed and broom finishes on concrete can become a thing of sublime beauty. 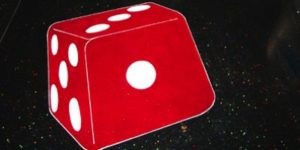 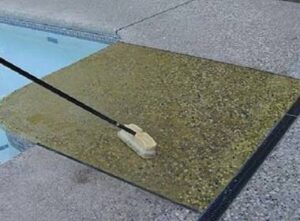 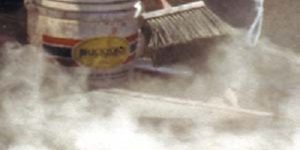