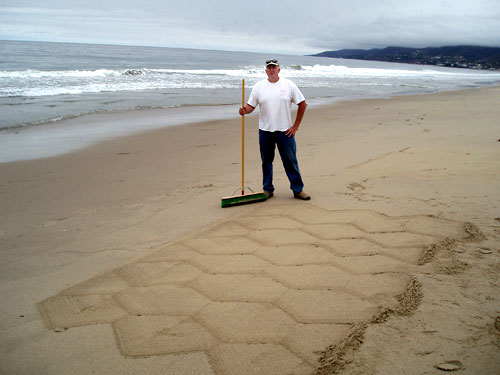 Brushed finishes are inexpensive and lend themselves to more creativity than you might expect.

Brushing or brooming a non-skid texture onto concrete is a standard finishing method. But with a little imagination, the right equipment and a skilled technique, a contractor can turn that finish into an inexpensive decoration that will please his client and boost his company’s reputation.

Brushes and broom heads made specifically for concrete finishing are made from several materials. “We have horsehair, polypropylene, styrene, and nylon bristle brushes in our catalog,” says Greta Moore, executive assistant at Magnolia Brush Manufacturers. She explains that horsehair, which is soft, gives the finest finish, while stiffer bristles give a coarser texture.

They achieve a softness similar to horsehair by using very fine bristles — as thin as 0.008 inch. “A lot of horsehairs and fiber materials will collect concrete and hold it at the ends in little balls, but the nylon doesn’t seem to do that nearly as bad,” Bolden says. His company uses only #612 Dupont nylon resin for its bristles. “It’s the most expensive nylon resin on the market,” Bolden says, “but we use it for its chemical and wear resistance, and its superior [shape] memory.”

Innovation
One way creative contractors can achieve unusual decorative finishes is by modifying stock implements. For example, in response to customer requests, Marion Brush has made custom brushes with variegated stiffness. A brush with alternating sections of stiff and medium bristles along its length creates an appealing pattern.

Another way to achieve unusual brush patterns is to use an unconventional applicator. For instance, Rick Smith, owner of Richard Smith Custom Concrete, reports using stainless steel brushes for extremely hard, rough surfaces. “I emphasize stainless,” Smith says, “because if a bristle was to come off of a standard steel brush, the bristle would typically rust and create a stain.”

Another great way to achieve a brushed finish is to use a sponge, says Chris Sullivan, national technical director for QC Construction. “As the concrete achieves a certain hardness, you start applying water to the surface with a hose, and use the sponge to work away some of the cream, to get the desired effect.” 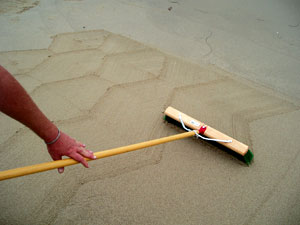 This requires a lot of work on the hands and knees, so it is expensive and time-consuming for large areas. However, Sullivan has seen the technique used effectively on small decorative areas such as pool copings, and accents or inlays within a concrete pad.

Another bristle-free brooming technique involves working a magnesium float in half circles. Sometimes called a floated surface, this is commonly referred to as a sweat finish. “It looks like the concrete has beads of sweat on it,” Sullivan says, “and they’ve been smeared around in these half circles.”

Bolden suggests a hybrid method accomplished by mounting a standard concrete brush in tandem with a bull float or fresno trowel. “You are actually using the bull float or the fresno as the vehicle to get the brush across the slab,” he says. “You don’t have to take a regular concrete finishing brush and lift it out, say, 24 feet and try to bring it back. That’s very hard to do.” Instead, after pushing the bull float or fresno across the slab, turning the handle for the comeback places the brush into contact with the concrete. The texture is applied as you pull the implement back. 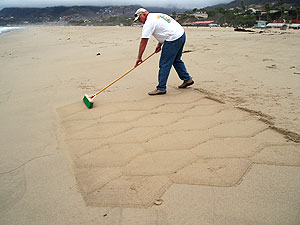 Having the right equipment helps, but you also have to have the right techniques to create an artistic brushed finish. It starts with knowing when to begin. “It’s all timing,” says Doug Carlton, president of Carlton Concrete. “If the concrete sets too long, you’re going to have a difficult time getting a uniform brush mark in it.” He recommends pouring small amounts at a time so you can watch it closely and see when it is ready. One way to do that is to pour and broom alternating sections one day, and then fill in the remaining sections the following day.

“The concrete is ready for brooming when it gets to a ‘greenware’ state, where all of a sudden the moisture’s pretty much gone off the top of it,” Smith says. “You’ve laid it out for the second time, and you wait until it’s still a little on the wet side. That’s for a heavy broom finish. For lighter brooming, you wait until it’s almost cured.”

There’s a real art to preparing the concrete. “If the concrete has a lot of cream in it and has to have a rough finish on it, you lay it down once — at the most, twice. You don’t bring the cream up,” Smith says. “If you have a soft broom, you lay down the concrete once, twice, maybe three times and just lightly wet the broom and the cream acts as a finishing aid.” 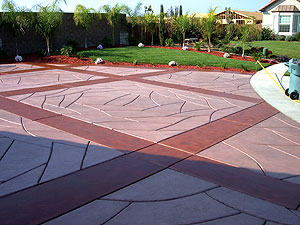 Watching and understanding the weather is crucial, because factors such as wind, humidity, and direct sunlight affect the concrete. In the winter you might have up to 4 hours to broom the concrete, while in the summer, you might only have a window of 30 minutes to 60 minutes. Anticipating weather conditions enables you to plan on adding admixtures such as water reducing agents or plasticizers to make the concrete accept the desired texture.

Each contractor seems to have his own preference for using water during the brushing operation. Some wet the surface, some wet the brush, and some do neither. “Water doesn’t really help with the effect of it,” Carlton says. “It’s more of a lubricant, just to keep the broom moving across the concrete.”

Smith says that surface tension is a big factor. “On regular gray concrete, we’ll use diesel as a bond breaker so the broom will slide across it a little bit better. With integrally colored concrete, we can’t use diesel because it may change the color, so we’re held to using a little bit of water.”

Sullivan adds a note of caution. “One of the big no-no’s with colored concrete is putting additional water on the surface. If you’re going to do that, you have to realize that it’s going to drastically change the color.”

Brushing colored concrete requires special care, but it can also produce a unique effect. “Using integrally colored concrete and orienting the direction of the broomed finish in different directions will cause light to reflect off the surface differently, creating the illusion that you have more than one color,” says Chris Becker, owner and president of Becker Architectural Concrete. “That’s one of the values in doing a broomed finish. Simply changing the direction of how it’s broomed, square by square, for example, will create two different colors.”

Changing the direction of the brooming creates other intriguing effects as well. The traditional brush pattern is simply straight lines, which can become more artistic if they are drawn in perpendicular directions on alternating sections to create a checkerboard pattern. Swirls or arcs are other decorative alternatives, but the possibilities don’t end there. “We have some brush patterns that are pretty off-the-wall,” Smith says. One is a repetitive polygon pattern created by brooming successively in several directions.

Finally, says Carlton, “The thing that’s most unique about broom finishes is they’re user friendly. If you’re doing a certain section and you’re not happy with how it’s brooming out, you can simply go back and re-trowel that area and then re-broom it.” That is true for any desired texture, although it is trickier with a light broom finish, which isn’t applied until the concrete is nearly set, leaving a shorter period of time for starting over.

The final step for a brushed decorative finish is at least a curing compound, according to Smith. He recommends using one that will dissipate after thirty days to leave the door open for after-staining in the future. Carlton says he often completes the job with a penetrating sealer. “But the best finish,” he adds, “is to wait until the concrete’s cured out for about 28 days and come back and put a sealer over the top, more of a lacquer base or a clear sealer. That will really give it a sheen that will enhance the finish underneath it.” That enhancement, of course, would have to be figured into the project bid if the owner was interested in it. 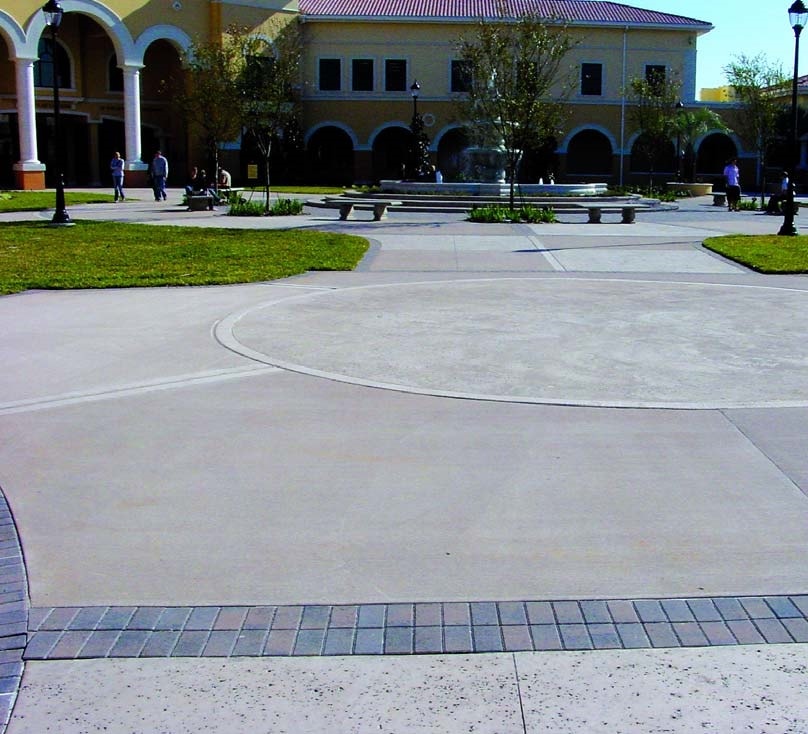 Sweep them off their feet
“Broomed concrete is the lesser of everything now, because there are so many exotic finishes out there,” Smith says. “But with a little bit of passion and a whole lot of tenacity, you can come up with virtually any kind of broomed finish. There’s no limit to it.”

Carlton agrees, but sees another aspect to developing skill with decorative brushing. “It’s a segue into getting into the decorative market and getting into some of the higher-end projects like stamped concrete,” he says. “It’s a good segue to get your crew to start to understand that they have to shorten the pours and pay more attention to detail. It kind of changes their mind set from just doing something as a functional, hard surface to creating a decorative piece of art. It’s good for a crew to learn, because if they’re going to be competitive, they need to keep going into the market that’s got a higher budget to work with. That’s the thing that drives us into the decorative market.” 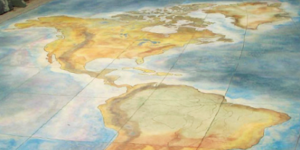 Designing Concrete That Is Maintenance Free