Elegant terrazzo floors in the United States got their start from a commonplace and perhaps unexpected source — ships’ ballast. Ships crossing the Atlantic in the early 20th century carried marble chips to aid weight redistribution and maintain balance as coal was consumed during the voyage. Craftsmen in New York and other coastal American cities “recycled” this material as the aggregate in a cementitious binder or matrix to create Italian-style terrazzo floors for luxury hotels and apartment lobbies.

The late 1970s saw epoxy resins from Europe enter the U.S. market as an alternative to terrazzo’s traditional cement matrix. Epoxy terrazzo remains an attractive option for installers to this day.
However, unlike binders that contain cement and cure by hydration, epoxy resins are polymers that cure by chemical reaction. This has a significant impact on how the products are installed and how the finished projects look.

Exciting design options
There are some good reasons why contractors would favor epoxy terrazzo over the more traditional cement-based variety.

“The biggest advantage of epoxy, the thing that really stands out, is color,” says Dan Steiner, manager of terrazzo for Polymerica Inc. “Epoxy colors are pretty much unlimited. Cement is limited to pastels and some darker colors.”

Lee Tizard, sales representative for Urethane Polymers International Inc., also cites color as an advantage. “Epoxies deliver more vibrant colors,” he says. “While you can produce a wide range of colors with conventional cement matrices, you won’t get the vibrant colors, the dynamic reds. And epoxies keep their intensity, while cement lightens as it dries.” 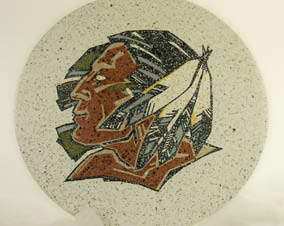 This permanent color intensity has good implications for repairing damaged epoxy terrazzo. “As long as a good record is kept of the color formulation and the aggregate, epoxy terrazzo patches can be matched perfectly,” says Steiner.

In addition to their color potential, epoxies make it possible to use aggregates that are not compatible with cement. Gary French, vice president of terrazzo business development for General Polymers, a Sherwin-Williams company, explained that aggregates such as glass, mother of pearl, plastic and metal can be used with epoxy, but not cement. Not only does the dense surface of these aggregates prevent bonding with cement, but shrinkage during cure can cause the aggregate to pop out when the surface is ground.

Tizard predicts that innovation in colors and design will fuel rapid growth in use of epoxy terrazzo. Epoxy resins can be formulated to be translucent, so elements under the floor can show through. Tizard has seen fiber-optic lights installed to make a floor light up and phosphorescent pigments incorporated into epoxy so a floor will glow under black light. He also foresees a resurgence in historic Italian terrazzo designs and techniques, including the incorporation of mosaics and slabs of stone.

Still, one color issue remains a problem for epoxy resins. They are sun-sensitive. “Ultraviolet (UV) rays and heat are a challenge for epoxy,” says Allen Sedaka, founder of Durite Concepts, New York City. “As a result, they are used more often inside than outdoors. People are experimenting with exterior applications, and there is a water-based resin that can be used outside, but it is very specialized.”

Strong and thin
“Normally (90 percent of the time) epoxy terrazzo is thin-set, one-half inch or less. Traditional terrazzo is an inch thick or more – it has to be thick to have strength,” says Dan Steiner. “This gives epoxies an advantage in existing buildings, because it doesn’t change the floor elevation.”
Sedaka confirms that advantage. “In New York City we don’t have the luxury to pour one or two inches,” he says. “With epoxy we don’t have to modify door jambs or entrances. There is less demolition required, saving owners and contractors a lot of headaches.”

Its thin-set quality also means epoxy terrazzo can be used on upper floors without additional structural support. French claims that epoxy terrazzo weighs about 3 pounds to 4 1/2 pounds per square foot, in contrast to 30 pounds for traditional terrazzo set in a sand-cushion bed.

This makes epoxy terrazzo an attractive material for precasting countertops and other features when pouring on-site is not an option. “You can cast cove details, wall panels or stair treads in much thinner sections than you ever could traditionally,” Tizard explains. “For example, you can precast a rounded cove, then heat it on-site and bend it to fit exactly.”

Even at a fraction of the depth, epoxy terrazzo is much stronger than cement. Gary French puts the compressive strength of thin-set epoxy according to ASTM D695 at 10,000 psi, compared to 4,800 psi to 7,000 psi for cement at a thickness of 3 inches. This means epoxy stands up better to abrasion and impact damage.

Perhaps more importantly, epoxy resins offer high tensile strength (French reports 3,000 psi, measured according to ASTM D638). This means epoxy can flex and give without cracking, so it can be used over a larger area without expansion joints. The fact that epoxy resins are 100 percent solids means they do not shrink during cure, eliminating shrinkage cracks.

Thin-set does mean more attention must be paid to the underlying substrate. Flaws or cracks in the substrate will be telegraphed to the terrazzo surface. Tizard recommends using a crack isolation membrane. Also, epoxy will not allow water vapor transmission, so the underlying substrate must be completely cured and dried. A vapor barrier may be required.
The ability to release trapped moisture vapor is another reason cementitious terrazzo is preferred over epoxy for outdoor applications.

Installation and maintenance
Besides the extra attention that must be paid to substrate and vapor transmission issues, contractors should be aware of differences in cure mechanisms.

Epoxy cures much more rapidly than a cementitious terrazzo matrix. “In New York, everything moves so fast that a floor has to be ready to use quickly,” Sedaka says. “With epoxy you can walk on it six hours after you install it. You can grind it the next day and it’s ready to open to the public.”

However, he warns that this quick cure time imposes some restrictions on installation. “Epoxy will go off if you don’t get it out of the mixer and install it right away,” he says. “If lumps begin to set, they are nearly impossible to get out. A jackhammer will get stuck in cured epoxy! Be sure you have a crew large enough and skilled enough to get the material down in time. It is extremely demanding.”

Sedaka also advises users to pay attention to temperature and humidity. He believes that an ambient temperature of between 50 and 60 degrees is ideal for installing epoxy terrazzo.

The final step in installing a terrazzo floor, whatever the matrix material, is grinding and polishing. Steiner believes the tight finish and high gloss of terrazzo are due in part to the weight of traditional grinding machines, which he says weigh thousands of pounds. The longer and smoother the floor is ground, the less maintenance it will require. “Some installers grind to 120 grit and then seal the floor,” Steiner says, “but real terrazzo artisans want a floor you never have to wax or polish. It’s more expensive to keep grinding, but when you reach the level of 800 grit — some go to 5,000 grit — you don’t have to seal or wax.”

Epoxy terrazzo offers an additional maintenance advantage — it is highly resistant to chemical agents. “Any job we do, we can go back 20 years later and it’s identical, because it’s resin,” Sedaka says. “Cement oxidizes with salt, urine, coffee or cleaning materials. These things don’t discolor or oxidize epoxy.” Steiner recommends regular cleaning with autoscrubbers to prevent abrasion damage, but says little else is required.

Twenty years may sound like a long time for a floor to stay looking like new, but in fact the lifespan of an epoxy terrazzo floor is comparable to traditional cementitious terrazzo, commonly estimated at 40 years or longer. Many of the floors installed in the 1920s heyday of terrazzo are still in use today. French uses numbers compiled by the National Terrazzo and Mosaic Association (NTMA) to show that over a 40-year lifespan, the cost of epoxy terrazzo averages $0.85 per square foot per year, 2 cents lower than cement terrazzo. 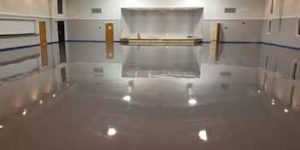 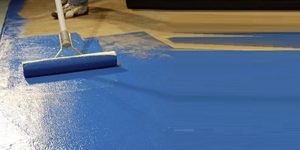 Easy to use Breathable Epoxy Coatings 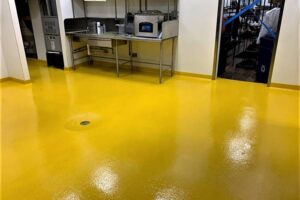