Artists use two large categories of shapes in their work: geometric (manmade and regular) or organic (capricious and often irregular). In art theory, shape involves how artists convey their subjects, which includes realistic imagery, abstraction and nonobjective work.

John Singleton Copley’s portrait of a boy with a squirrel (above), done in 1765, is an example of realistic imagery. The entire picture is in sharp focus, and the textures of skin, fur and fabric are rendered with equal care. This realism is what collectors and the public have been accustomed to for centuries.“Nonobjective” doesn’t mean no one objected to this style of painting — many did, and loudly. But that didn’t stop artists from using symbols or gestures instead of photographic renderings to represent their subject matter. Other terms for nonobjective paintings are “nonrepresentational” or “completely abstract.”

In the self-portrait done by Eugene Delacroix in 1837 (page 49, left), there is a loosening of the brushwork in all regions except the face. The background is simply sketched in with long brushstrokes and the details of his jacket are only suggested. Delacroix wanted viewers to zoom in on his face. Here we see the beginning of abstraction in art. The artist selects and emphasizes what he wants us to focus upon.

Wassily Kandinsky began to improvise with shapes and colors in the early 1900s. In his “Improvisation 26 (Rowing)” (left) done in 1912, we see an example of a nonobjective painting that is so abstracted it is almost unrecognizable. This approach is like musicians who focus on new sounds and chord progressions instead of faithfully reproducing a familiar melody.

You might ask why an artist would want to paint unrecognizable forms after spending years learning to observe closely to make realistic copies of what they see. The short answer is that it’s a lot of fun and often much more expressive emotionally. Nonobjective art didn’t happen overnight. It took nearly a century, but in the long history of art, that was rapid change indeed.

Photography enters the picture
Throughout European history, it was the artist’s job to make portraits of royalty and record important historical events. The best artists were well paid by wealthy patrons or the church. Painting and sculpture had gravitas and carried heavy traditions handed down from the old masters. Then the invention of the photographic plate changed everything.

The principles of photography — that an image projected through a pinhole could be seen upside-down on the wall of a room — were first discovered in 470 B.C. in China. It took centuries, however, to develop a portable camera with glass plates that could record images. In the U.S. in the 1860s, Matthew Brady became our first famous photographer during the Civil War.

When photography came into its own, painters who didn’t want to immerse themselves in the new technology were released from the chore of realistic illustration to revel in other aspects of their art. This led to the movement known as Impressionism.

To our eyes the colorful dabs and blue shadows of Impressionism look entirely plausible. But in the mid-19th century, it was considered a shocking breach of the social contract. One journalist accused Impressionists of “throwing a pot of paint in the face of the public.” Viewers in those days were not used to seeing the artist’s brushstrokes. Colors were muted and gradually blended together. The subject of the painting was a person or an event, not the artist’s love of brushwork, light and color.

Just 50 years after photography became widespread, a few artists got even wilder and began playing with thicker textures and larger, unblended dabs of pure color as in André Derain’s portrait of Henri Matisse from 1905 (above right). This was later called Expressionism. We now pay astronomical prices for such bold works — especially those of Vincent van Gogh — but the general public did not enjoy

such experiments. Many of those artists, like van Gogh, died in poverty and shame.

Comprehending the works
Another movement in the early 20th century, called Cubism, was led by Pablo Picasso and Georges Braque joined by Juan Gris, Marcel Duchamp and others. They reined in their use of color and concentrated on photography’s stop-motion effects. They wanted to reveal the basic geometry of their subjects, as seen from several angles at once.

Duchamp was notorious for his “Nude Descending a Staircase, No. 2.” I find this painting quite humorous, but many gallery visitors of the time felt anything they could not instantly recognize was a personal assault on their intelligence. I don’t know why people think they should immediately comprehend every picture they see.

Artists study form and color to culminate in the style they present. If scientists present a long equation — a culmination of their work — which we don’t understand, we don’t become incensed. Perhaps because most classify art as entertainment, many feel it should be as accessible and as non-thought-provoking as a Disney cartoon.

Nonobjective art such as Kandinsky’s requires more effort and imagination on the viewer’s part. In much the same way as we contemplate clouds, it helps to look at such works as a variety of slow-changing images. Modern artists feel that “the viewer completes the work of art,” so they leave it up to us to decide if we think it is worth the effort.

Some concrete artisans, such as Lou DeCillis have managed to do the latter by creating Impressionist paintings with stains and dyes. He has won awards from L. M. Scofield for his floors, as well as new commissions.

Art is all around us
In the 21st century artists assume many roles. Some try to alarm us into shunning war and the destruction of the environment. Others wish to soothe us. Still others try to maintain a fresh, childlike vision and share this delight with the public.

Robin Brailsford has used LithoMosaics to create abstract art, in this case a large jellyfish with cells of flowers on its canopy. She is a pioneer who has worked hard and experimented for years to find a practical way to combine mosaics with newly placed concrete.

In 2010, I painted nonobjective shapes on concrete troweled over foam insulation. I used acid stains for the background and later etched it (using blue stain) with shapes cut from felt. For traveling purposes, it was made into a diptych (a painting on two panels) and sealed with gold powders in a solvent-based floor sealer.

Inspiration is everywhere. We do not have to start from scratch. From art in museums to illustrations in Scientific American magazine, study everything which catches your eye. Start small; experiment to see what you can create. Concrete is such a practical medium that, fortunately, we do not need to risk starvation in order to innovate. 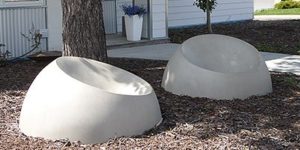 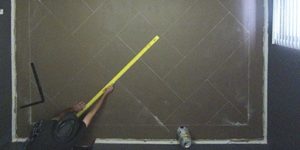 Ashlar Pattern Layout can be Quick and Easy