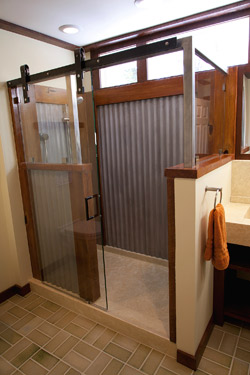 Installing concrete in often-wet areas such as baths and showers demands more of a concrete contractor. It requires a different type of preparation and construction from counters and even sinks, so contractors would do well to understand the specifics.

The key is to isolate the tub or shower from wood and other materials that might be damaged by moisture. “Never allow concrete material to sit on wood,” says Roch Fautch, of Magicraftsman Co., Spokane Valley, Wash. “The alkali will eat the wood.”

A waterproof barrier such as a cementitious board painted with a rubber membrane must be installed. Working with a homebuilder who understands the issues is a good way to prevent problems.

The next step is choosing the right mix. Here concrete artisans will find themselves in familiar territory. Most use the same mix they’ve been using for sinks or counters. Given the mass of a tub or shower, a lightweight vertical mix, overlay or GFRC additionally reinforced with scrim are the most common choices. Many choose a denser-than-average mix and add a densifier to the cured concrete to reduce the porosity of the concrete and protect against water infiltration. 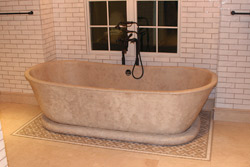 Of course, proper sealing is critical for protecting the beauty of any concrete piece, but it is absolutely essential for wet areas like tubs and showers. The most common technique is to apply multiple coats of a penetrating sealer like a water-based polyurethane. Fautch uses epoxies or two-part polyurethanes, sometimes both — epoxy as primer with polyurethane on top.

Slip resistance is crucial for tubs and shower floors, so adding a grit or roughing up the surface is an important last step.

Experience is the best teacher, so here are several examples. The key feature of a shower by J&M Lifestyles’ Jeff Kudrick, Randolph, N.J., is a glass door that slides on a track like a barn door.

Kudrick explains that the shower pan is custom-fabricated with a drain trough outside the separating wall to drain drips from the door back into the pan.

The concrete, a Surecrete Design Products GFRC mix, was cast with a 10-by-10 scrim in the shape of corrugated steel and sealed with pearl in the finish to suggest metal. The shower pan and the tub have the J&M signature coralline limestone finish. “The exterior of the tub was stamped with a hammered copper texture to cut the cost of making an exterior mold and to make it more interesting than a smooth trowel finish,” Kudrick explains.

The project was sealed with three coats of XS-327 Hybrid Water Based Polyurethane from Surecrete, the first diluted at a ratio of about four parts water to one part sealer, the second coat one to one and the third coat full strength.

Kudrick advises fabricators to make it a habit to check drains and faucets for the correct knockout size. When building a shower or tub in the shop, he recommends having the plumbing hardware there, installing the drain to make sure it seats properly. Then fill the tub with water, let it sit all day to make sure it is watertight. Take a picture to prove there is not wetting, in case subsequent damage causes a leak.

Tyler Thomas Blaine, Thomas Design, Salt Lake City, chose his own bathroom as the site for his first concrete tub. “Bathtubs are just large sinks to me,” he says. He constructed the tub of 1-inch GFRC, installed it against a waterproof Durock wall, then bent an L-channel to sit on top of the tub and behind the finished wall panel — also GFRC panels, 1/2 inch thick and more than 5 feet tall — so that any moisture will drip into the channel and back into the tub.

Blaine doesn’t believe that microfissures that appeared after demolding present moisture problems, thanks to a reactive penetrating sealer, ICT First Sealz from Blue Concrete. He also finished the wall by the toilet in board-formed concrete tiles. 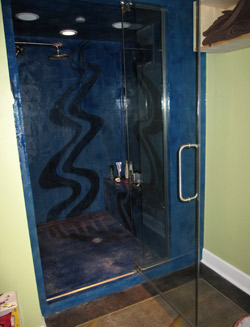 Experience with tile showers and drywall was an advantage when Concrete Mystique, Nashville, Tenn., was called on to build a steam shower. This application requires the most rigorous moisture protection of any tub or shower. As owner Rick Lobdell explains, “You just waterproof everything and instead of laying tile, skimcoat it.” The advantage of concrete over tile, he says, is that there are no joints so it’s easy to clean. For the steam shower, Lobdell waterproofed HardieBacker board and overlaid it with Patchcrete from Lyons Manufacturing Inc.

One challenge was the ceiling. “You have to make the mud a little dryer and take more time — be patient,” Lobdell advises. Since the owner wanted a smooth surface, the design elements had to be delivered through color. Lobdell hand-painted it using dyes from Surface Koatings Inc. He sealed the shower walls and ceiling with two coats of the company’s PolyKoat GL polyaspartic, diluting the first coat for deeper penetration. He added silica to the coating to give the shower floor more traction. The floor outside the shower was acid-stained and sealed with Stamp Seal Gloss acrylic from Surface Koatings. 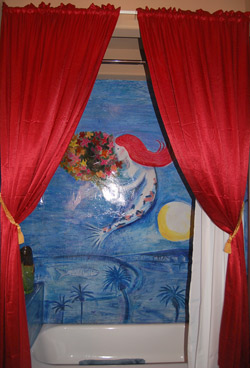 Art appreciation moved into the bathroom in a unique design by Dana Boyer, Concretizen, Apache Junction, Ariz. To create this tub/shower combination, Boyer waterproofed the walls with Blue Coat, a rubberized paint. Then she fiber-reinforced vertical walls and applied a microtopping mix. She used a variety of media — acid stain, paint, pastels, water-based stains — to recreate a painting by Marc Chagall on the back wall. Boyer applied multiple coats of Polyurethane 501 two-part sealer from Arizona Polymer to finish and protect her work and then sealed between the shower and the wall with a silicone caulk. The floors were sealed with a solvent-borne acrylic sealer and finished with a high-gloss floor finish.

For Steve Gartner, co-owner of Greyrock Concrete Design, Fort Collins, Colo., a project in Jackson Hole, Wyo., went beyond anything he had ever tried before. 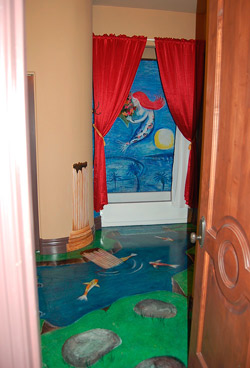 The homeowner wanted a curved, cylindrical shower. Gartner reports they built convex and concave barrel molds “like skateboard ramps” in their shop, using a 2-by-4 framework, Masonite substrate and a melamine casting surface. Each mold was more than 8 feet tall and divided into three panels. “One crazy panel was the top curved panel on the outside of the shower, as it was notched around the door but continued on a curve above,” Gartner says.

They shop-built the shower with GFRC panels 1 inch thick spiked with UltrasealZ ZFRC admixture, a mix of pozzolans that creates very dense concrete. They also cast a vanity, tub deck and curved tub skirt. Given that their shop in Fort Collins was an eight-hour drive from the job site, advance planning was critical.

Typically, Greyrock finishes projects like this with a penetrating waterborne polyurethane sealer, because Gartner explains, they can really get it to soak in. He says they drench it with polyurethane to the point the concrete is “drinking the sealer.”

Concrete Kitchen with a Granite Island 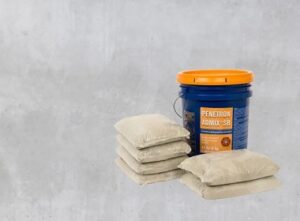