A giant-sized concrete gear table inspired by Ayn Rand’s novel, “Atlas Shrugged,” greets all who venture into the lobby of 145 Palisade St. in Dobbs Ferry, New York. Located on the banks of the Hudson River, the repurposed commercial building once housed the circa 1853 Anchor Brewing Co. However, today it’s home to artists, graphic designers, architects, photographers and production studios. It also houses wellness professionals, along with a florist and an award-winning salon.

Overall, it was important to the developer, The Bajraktari Group, to preserve the former brewery’s industrial-chic look. “We wanted to maintain that factory feel in this iconic building,” says Florim Bajraktari, the group’s director of sales and marketing. Formally named Hudson River Landing, some consider it the “Art Building of Westchester,” he adds.

Bajraktari, who also serves as the building’s property manager, specializes in acquiring distressed factories and revamping them into vibrant commercial entities. His group has properties throughout New York and in parts of Europe.

Almost six years ago, Bajraktari discovered concrete’s beauty and versatility and says he promptly “fell in love” with the medium. As a result, this affection prompted him to form a restoration division within The Bajraktari Group that specializes in polished concrete. It also inspired him to use concrete for the giant gear display he calls “Cogs of the Machine.”

“This gear represents just a piece of the bigger plans we have for the future,” says Bajraktari, who designed and created the piece with Ivan Djokic, the senior project manager. It took the pair a little over a year to complete the initial piece.

Bajraktari says they chose concrete because they wanted to demonstrate how such a rigid material could be “extremely malleable.” Combining it with various materials, Bajraktari and Djokic would use it to make a statement that would last many years.

They laminated three sheets of ½-inch plywood to make the internal gear and routed a channel for the larger gear. “We chose this method, as opposed to a solid-steel gear, to reduce the overall weight of the installation,” Bajraktari says. They then coated the wooden gear with a rust-activated paint and topped it with MAS Table Top Pro epoxy.

Around the gear’s outer edge in gold leaf, they imprinted a quote from the book. It reads: “I will stop the motor of the world,” attributed to John Galt, the hero of Rand’s novel.

Getting it in gear

The duo used a multistep process to create the concrete gear. First, they began with rigid foam board cutouts to mimic both external and internal gear teeth. Then they created a rebar brace to support the structure. Finally, they coated the forms with Quikrete Countertop Mix combined with additional small aggregate for added texture.

Meanwhile, the two fashioned the accessory sprockets for the base in a like manner. They created the base of the gear “to give the illusion of the gear levitating” over the Hudson River Landing logo in the main lobby, Bajraktari says.

Concrete is the glue

Besides the huge gear, the art installation also features a repurposed steam valve from the early 1900s. They salvaged the valve from the old brewery’s furnace building.

A painting by Polish artist Jerzy Kubina rounds out the installation.

Overall, Bajraktari believes they’ve successfully transformed one of Westchester’s most iconic buildings without losing its original feel. “The concrete gear ties the whole thing together,” he says. 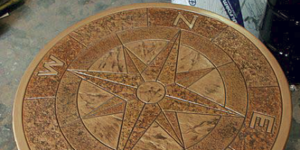 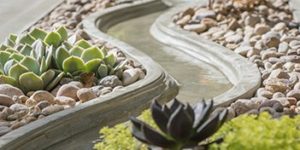 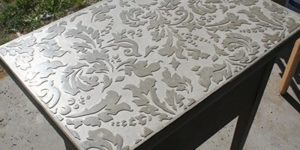