Marvin and Lilli Ann Rosenberg
Lilli Ann Rosenberg discovered concrete more or less by accident, when a concrete truck dumped a pile of wet cement in a vacant lot across the street from the Henry Street Settlement in New York City, where she taught art to children. With the children’s help, the pile of cement turned into a sculpture that included mosaic designs made with pieces of pottery the children had created.

Now she has been working with concrete for more than 30 years. “It’s magic,” she says of her favorite medium. 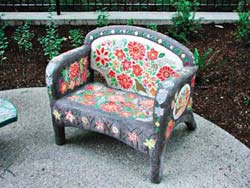 Lilli Ann and her husband Marvin make their own mix, choosing darker or lighter, rougher or smoother aggregate depending on the effect they want to create. They often use a type of calcium aluminate cement called Fondu (manufactured by Lafarge) which is more plastic than ordinary cement as well as darker in color. It is extremely strong and sets up in about eight hours, but remains plastic for about an hour when creating a sculptural form. White and gray portland cement are also favorite ingredients.

Their mix is rich, Lilli Ann says, comprising two parts sand to one part cement. She doesn’t measure the water, adding just enough to get it to a clay-like consistency. “The amount you need each time is different depending on the weather,” she says.

The Rosenbergs color with integrals and use white portland cement to create white areas in a design. Venetian glass and hand-formed mosaic tiles made by Lilli Ann are embedded into the concrete to create patterns and accents that bring the creations to life. Textures are often created by stamping with found objects of various kinds.

Some of their pieces are solid; others have a core of Styrofoam that makes them lighter. Each is completely individual and created for the project at hand.

To create the “love seat,” installed in a children’s garden at the Eugene Public Library in Eugene, Ore., they first made an armature (framework) out of welded rebar. Inside the framework they put slabs of Styrofoam to make the seat lighter in weight. Then they covered the armature with wire mesh and covered that with about an inch of concrete. The white areas are portland cement. Patterns are created with hand-made tiles embedded in the fresh concrete.

The frog
The frog does not have Styrofoam in the middle. It began life as a clay model, which was then copied to make a larger armature. After covering the armature with wire mesh, Lilli Ann turned the frog over and plastered his “innards” with concrete. Then she turned him over again and coated the outside, so the concrete is two to three inches thick. The texture on the frog’s legs was created by stamping with decorative wrought iron, which was first dipped in light cooking oil so that it didn’t stick in the concrete. Brightly colored tiles were inlaid while the concrete was still workable.

To make the bench, Lilli Ann created a pattern out of cardboard. Then a welder used the shape to create a color-coated metal tray with rebar welded into it. The Rosenbergs poured concrete into the tray and pressed in clay pieces, stones etc. The legs were an integral part of the welded frame and were set into a concrete footing on the site.

The dragon
The dragon, created in three sections, was first carved out in Styrofoam. Rebar (3⁄8″) was bent to fit the form and wire wrapped around it. White sections were created with portland cement, brown areas were integrally colored, and details were created by stamping and embedding mosaics and tile into the fresh concrete.

Finishing touches
When the Rosenbergs complete a piece, they treat it with a dilute solution of muriatic acid to expose a little of the aggregate. Then a penetrating sealer is applied. They are careful to educate their customers on the importance of a regular maintenance program in the form of yearly cleaning and resealing.

“Just like when you plant a tree, you need to take care of it,” Lilli Ann says.