The challenge of dealing with water in vapor form is a primary concern of Paul Frankel, president of William M. Perkins Co., a San Diego painting and coating company with an extensive project portfolio that includes decorative and protective coatings on concrete.

“I learned early on that moisture was going to be the thing to make or break the business,” Frankel says, adding that failure to address this challenge has led to the demise of many San Diego companies. “Every concrete project I do involves moisture mitigation in some form.”

A product that has grown to become a key weapon in Frankel’s moisture-control strategy is Drytek, a moisture-barrier formula from Laticrete International Inc. The product can be effective in a single coat, applied thin or thick depending on the job, is tintable and chip-broadcast compatible, Frankel says. He also employs measures he’s devised on his own, but prefers to keep those close to the vest as “proprietary.”

Jeff Bonkiewicz, specialty products division manager with Laticrete, says Drytek was formulated in response to market demand for a system to deal with moisture vapor transmission related to installing self-leveling underlayments. The product also can be used as a basecoat for self-leveling overlays, epoxy floor systems and polyaspartics, he says.

Drytek is a one-coat, two-component, 100 percent solids epoxy coating. Ease of use was a priority in development, Bonkiewicz says, citing the premeasured amounts of the two-coating components in their respective “Part A” and “Part B” containers. One component is simply poured into the other and mixed when applied.

Frankel says that although Laticrete and other manufacturers have made great strides in developing products for waterproofing and moisture mitigation, contractors who hope to succeed must acknowledge the limitations of any coating or waterproofer where moisture is pervasive. These situations are fairly common in construction that dates prior to 2004-2005 in California, he says. That’s when the state building code required builders to install vapor barriers below structures.

But for concrete surfaces that were built before 2005, moisture below the surface continues to lurk. A concrete surface with visible efflorescence (blooming) signals that moisture vapor transmission is occurring, and any kind of coating or moisture barrier applied will likely fail.

“Some slabs I walk away from,” Frankel says. “Even with a coating, I’m not helping that client. My coating may hold, and the system may work initially. But eventually, because the moisture can’t escape from the slab, the concrete will deteriorate. Certain slabs should not have a moisture-control system — it’s just too wet.

“A lot of guys in my business have the philosophy that you can put a coating on anything now. My experience has shown that this is not always the best decision or approach for a customer.”

Frankel says he thinks back to his experience with horizontal concrete at his home some years ago, before his own concrete-coating business was started. When the coating system failed, the contractor said he wasn’t responsible, citing the fine print — warranty language exclusions.

Frankel says he didn’t want to see his own company follow shortsighted business practices like that, knowing it would catch up to the company in the long run. He set out determined to do his homework, becoming something of an expert on the concrete moisture issue in local construction circles.

“I didn’t want to make excuses or hide behind a cleverly worded warranty,” he says. 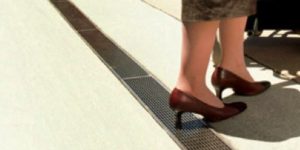