Moisture problems in concrete slabs old and new can play havoc with decorative concrete projects and other flooring strata in several ways. These include bubbling, blistering and blushing of color. It’s usually an interior problem because breathable products that reduce the threat are more commonly used outside. However, if you have the right strategies and products in place you can easily begin the process of remediating moisture in concrete.

“Anecdotally, based on conversations heard the last two or three years at World of Concrete, it seems like there have been more discussions about remediating moisture problems in decorative concrete,” says Jason Spangler, flooring division manager at Wagner Meters in Rogue River, Oregon.

“I think this is because of the increased use of epoxies and overlays that aren’t as breathable. That  and greater use of nonbreathable surface coatings and treatments for aesthetic purposes.”

The Food and Drug Administration and U.S. Department of Agriculture also mandates nonporous products for use in health care, food processing, breweries and other commercial sites where the situation demands sterilization.

The good news is that once you’ve identified the problem and figured out its cause, contractors have a range of solutions at their disposal to effectively remediate moisture problems in concrete.

If a structure has a wetter slab, the general conditions surrounding. it will often point out the cause, says Frankel. “I like to see direct connections between the roof, gutter and downspout to a landscape drainage system so the water coming off the roof goes directly into the storm drain and away from the foundation.”

A lot of the homes in California either are over-irrigated or don’t have proper gutters and downspouts.

Without the latter, “All the rainwater will fall straight down next to the foundation,” he says. “Some of it will ultimately end up under the house. It depends on the topography of the lot and landscaping around the house, but even in a dry year, tens of thousands of gallons of water can end up rolling off even a small home here. Just a fraction of that is way too much water to go under the house.

“Without a vapor barrier in place to protect the home from runoff from the roof or from irrigation, this water will easily pass through the slab on its way back to the atmosphere. This creates excessive hydrostatic pressure within the slab. That’s when the job becomes more complicated, expensive and riskier for coating contractors,” says Frankel. In new slabs, moisture is often caused by contractor error in mixing the concrete.  Not waiting the full 28 days or more for the slab to cure can also cause the problem..

Wagner Meters’ Spangler identifies not waiting out evaporation of the water of convenience — the fluid in the cement mix for the ease of placement and finishing — as a prime culprit.

“You have to think of concrete as a hard sponge,” says Mario Nicasio, director of market development and technical support at Elite Crete in Valparaiso, Indiana. “Moisture that rises from the substrate will be absorbed into and rise through the concrete slab, filling the pores and capillaries.”

Hydration will usually occur — eventually. But when?

Every expert pointed out the importance of testing for moisture in the slab before applying coatings. Nicasio says that the industry continues to push toward ASTM F2170 testing. This testing for remediating moisture in concrete calls for drilling holes in the new slab and then placing in-situ probes. Probes should be placed at the rate of three per the first 1,000 square feet of surface. After that, you should place at least one per 1,000 feet.

Wagner Meters’ RH 4.0 EX meters include sensors you sink, with 3/4-inch drill holes, to a depth of 40 percent of the slab depth. They are then left in for 72 hours for relative humidity and temperature readings. Wagner product packages also include metal disks that drop into the top recessed portion of the sensor, just below the surface of the concrete.

“The disks enable documentation that moisture testing was actually performed if the slab fails and customers look for answers,” says Spangler. “Grid paper is included in the system so you can map out the placement of the holes as you make them. Then use a magnet to find the disks for proof that you did the work.”

“Although the ASTM standard waiting period for the sensors is 72 hours, and you’re going to follow that standard, you can get a good ballpark preliminary reading after one hour,” Spangler says. “It will usually show you within about 5 percentage points of the moisture reading you’re going to end up with when testing is done. This one-hour reading allows you to start having discussions about what your early indications are.”

This can be valuable data for next-step preliminary planning. However, Spangler emphasizes, “You’re definitely not making any installation decisions based on that.”

According to Nicasio, “Most nonbreathable resinous floor coating products allow a maximum threshold of up to 75 or 80 percent relative humidity without needing any special procedures.”

Avid Wagner Meters customer Bill Lepito is something of an expert in concrete moisture testing. Through his company, Certified Floor-Covering Consultants, Lepito specializes in conducting forensic floor failure analysis for large flooring sites. So how familiar is he with testing technology?

“I typically do about 600 tests a year. I’m doing 25 tomorrow,” he says. And he almost always conducts  these tests with Wagner Meters’ Rapid RH meters.

He highlights the fact that it takes him a minute to a minute and a half to drill the hole and vacuum it out. Then it takes just a minute or so to place the sensor. This process generally takes less than five minutes per hole.

The process is even less complex for Frankel, who frowns on drilling holes. He says, customers will hate those holes (even if they’re only temporary). “Moisture testing doesn’t have to be highly accurate. It’s either a problem or it isn’t.” You just need to know if there’s a problem.

“With this testing method, I can measure moisture levels on 20 or 30 places on the slab in less than five minutes. Then I can show the customer the results immediately,” he says. “If the site conditions and the test results line up, I remediate.”

That’s good news to Andrew Rynhart, CEO of Tramex Meters in Ireland. He points out that the most ideal approach is to do both invasive and noninvasive testing when remediating moisture in concrete. However, the Tramex system will tip off contractors to problems early.

“The advantage of our system is that it’s quick and it can measure the top inch of the slab,” Rynhart says. “If you have moisture that’s lower than that, you want to seal if off. But you don’t want to seal the slab if the moisture is coming from the top.”

With new slabs, moisture most often means that the slab isn’t yet rid of all its water of convenience. Waiting another day can be a simple, valid solution much of the time — when you have the luxury of time.

“You can mitigate many moisture problems in new slabs by mechanically profiling the surface,” says Nicasio. “This opens the concrete pores and allows the release of all of this excess moisture if you allow enough time.”

Another relatively simple solution is the application of an epoxy coating that will act to seal in the moisture. One such moisture remediation product is VaporSolve Ultra System from Arizona Polymer Flooring. Company CEO Daniel Owen says that there are three basic uses for this product.

“It can be used anytime there’s moisture, whether with fresh concrete, when moisture is known or even when the state of the surface is unknown and you’re using it as a preventive measure.”

Drytek from Laticrete is Frankel’s moisture control barrier of choice. “You can put it down in various strengths to control any degree of moisture as long as it’s not over the redline (the moisture threshold, per each coating manufacturer’s specs).”

In addition to its protective quality, Drytek is a step-saver, Frankel says, as it comes tinted and untinted. When using the tinted version with broadcast flakes, he doesn’t have to apply another primer coat if he puts it down thick enough. This saves him time and materials without losing moisture protection.

He recommends an application of about 70 to 130 feet per gallon, depending upon moisture levels and site conditions.

The bottom line is that moisture in concrete doesn’t have to be a major problem, but it must be addressed. Simply test upfront and identify the signs of current or possible moisture problems. Then use the right response mechanisms and remediation products to take on problems that have already occurred. 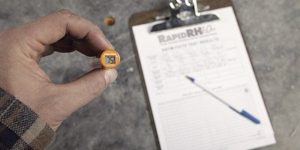