“It’s one of the oldest decorative concrete techniques, but one of the most difficult to do correctly,” says Tom Ralston, a third-generation concrete contractor and owner of Tom Ralston Concrete in Santa Cruz, California.

Ralston says broadcasting, or “seeding” aggregate is “somewhat of a lost art” for contractors who are relative newcomers to the trade. Key challenges to creating successful exposed aggregate artistry include the task of achieving uniform consistency with a tight matrix of aggregate, he says.

“If you don’t broadcast correctly, you’ll have big gaping spaces where not enough aggregate was used, or clumps of aggregate where aggregate was piled up and not properly distributed.” One trick that Ralston has incorporated to help “disguise” blank spaces that don’t have seeded aggregate is to add an integral color to the mix.

“The integral color should harmonize with the main hue of the chosen exposed aggregate,” he says. “That way the gap or space devoid of seeded aggregate is less noticeable.”

Another common pitfall: Doing the wash too early after the pour and seeding, causing aggregate to “pop out,” he says.

“Broadcasting requires good hand-eye coordination from finishers. And many don’t have that,” he says. Of Ralston Concrete’s 24 employees, he feels only about five are proficient in seeding aggregate.

Regional flavor
Technique and hand-eye coordination aside, there’s the matter of artistic vision in selecting and using aggregate, which can run from the miniscule (rock fines) to soccer-ball size and larger. Color, shape and surface characteristics all figure into how aggregates will appear in a concrete installation, and concrete color treatment and its interaction with aggregate are important facets of the canvas.

Concrete-mix composition varies from one geographic (and geologic) location to another, and aggregates used in decorative concrete projects also reflect regional variation. Specific aggregate types can be imported to fit a certain creative objective, but local and regional sourcing often gives projects a connection to an area’s natural environment. Economics also favor local sourcing, as do sustainable design and building programs such as LEED, the U.S. Green Building Council’s Leadership in Environmental and Energy Design rating system.

In California, black and white Yuba quartz and red river rock deliver this kind of connection to regional geology, and these aggregates are readily available, while a greenish-blue rock from the Tahoe area produces the “Blue Lake Skimmer,” Ralston says. The San Pablo rock, a dark blue, comes from the Delta region of the Sacramento area.

Other typical aggregate sources in the California decorative concrete market are Mexico, Utah, Oregon and Arizona, he says.

“Perhaps they live next to the ocean or in a forest. It just all depends. There’s no one specific formula and that’s the beauty of it. It’s art, and as they say beauty is in the eye of the beholder. So a concrete contractor has to be really sensitive to the owners or architects or whoever’s making the decisions and run with their sensibilities.”

That’s just beachy
On the other side of the country, in Florida, regional sourcing finds expression with materials such as seashells and lime screenings, says David Edwards, president of Edwards Bomanite in Winter Garden, Florida.

Seashells make a statement in pool decks installed by Edwards Bomanite, in a miniature golf feature at the Grand Beach by Diamond Resorts and in many other projects by the company in Florida, Edwards says.

At the Arden Park pool in Orlando, No. 2 coquina shells were combined with gray concrete, and the surface was sandblasted to remove the shells’ sharp edges. At the miniature golf project, decorative curbing and low walls around greens and holes were constructed using integrally colored concrete and shell aggregate, with white cement adding accent on adjacent walkways.

More exotic aggregate types played starring roles for Edwards Bomanite in a major project at the boutique Kimpton Hotel in the Cayman Islands. Aggregate from Cactus Canyon Quarries of Texas was used in combination with two different integral colors — an orange shade called Ginger and a dark color called Bark. Mother of pearl from South Africa was used in an accent band between the two colors.

Cactus Canyon aggregates Pearl Gray, a subtle shade of the color, and Blanco Mexicano were used to add dimension to the integrally colored concrete surface.

Edwards recalls the aggregate choices for the Kimpton being put through a gauntlet of reviews by the project architect, with three sets of samples needed to get the final aggregate/integral color combination.

Texture and brightness
Back in Florida, Edwards Bomanite relied on locally sourced aggregate — limestone screenings — to give texture and brightness to gray concrete in a plaza area at the Orlando Florida Temple of the Church of Jesus Christ of Latter-Day Saints. This was combined with white concrete, where granulated granite aggregate was broadcast. The overall effect, dominated by a bright white, served to tie the plaza to the white precast-concrete temple structure.

Aside from the decorative treatments at the LDS temple, Edwards Concrete was called on to employ its heavy-duty concrete expertise with the installation of a 12-inch-thick slab for the plaza, with two mats of steel rebar. This robust construction was specified to ensure the plaza holds up when heavy lift equipment is used to clean the 165-foot-tall spire.

Cohen says such projects reflect the booming trend of designing backyard space into different outdoor rooms including living rooms, kitchens, dining rooms and spas, as well as pools with elaborate pool decks. Colors and aggregates can customize and differentiate these spaces.

In the project shown here, the steps and pool coping were cast in place, using white cement and pea gravel aggregate. An edging tool was used to add safety slip resistance on step edges. Abalone shells were seeded, and a subsequent grind was employed to hone, but not polish, the surface to retain slip resistance.

A countertop was also installed in the project, using the same materials and processes, but with polishing to a glass finish. 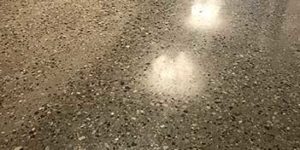 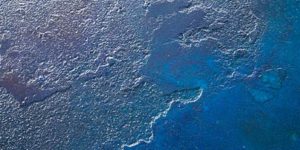 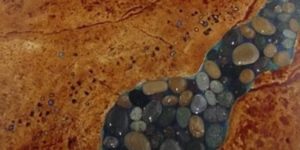