Question: I recently applied a two-part polyurethane sealer over a stained concrete floor. The sealer’s application instructions said to apply the second coat after the sealer was “tack-free” or between 4 and 8 hours after the first coat was applied. What does tack-free mean? Why do I have to wait, and what if I apply the second coat the next day?

With the exception of 100 percent solids coatings, sealers and coatings contain liquid solvent called the carrier. Popular solvent carriers include water (yes, water is considered a weak solvent), acetone, xylene, tertiary butyl acetate (known as TBAc), Aromatic 100 and others. Solvents other than water are usually blended together to achieve a desired drying time.

The type and amount of solvent will play a big part in how easily the sealer is applied, how it lies down and how fast or slow it dries. Typically, one-part sealers dry without curing. Once applied to the surface, the liquid carrier evaporates into the air, while the resin or solids portion of the sealer forms a film, allowing the whole system to dry.

With two-part coatings, sometimes referred to as catalyzed systems, drying and curing occur. Curing refers to the chemical reaction that takes place between the different parts mixed together, also commonly called crosslinking. I often compare crosslinking to a bowl of spaghetti with all those intertwined noodles forming a dense network that’s not easily pulled apart. Crosslinking is what gives two-part systems added durability and chemical resistance. These are often labeled “high-performance coatings.”

Another place where drying versus curing affects our industry is when something is resealed or repaired. Sealers that dry, and are based on solvents other than water, reliquefy when solvents are applied to them. Coatings that cure are not affected when solvents are applied. This is why one-part, solvent-based sealers — typically acrylics — are easier to repair and recoat without much preparation. Solvents reliquefy the previous layer of sealer, allowing for easy recoat or repair. Water-based sealers or two-part coatings, which do not reliquefy by solvent contact, must be sanded or screened before reapplying or, in a worst-case scenario, removed by a chemical or mechanical process.

Having a basic understanding of drying versus curing makes it easier to explain the different phases sealers and coatings go through.

Phases of sealers and coatings

Shelf Life – This is the length of time a product will last in a container when stored airtight between 50 and 90 degrees Fahrenheit. Most manufacturers offer a one-year shelf life on sealers or coatings. Two-part systems tend to be more sensitive than one-part systems when it comes to shelf life but, if stored properly, most sealers and coatings will last well past a year.

Open Time – Once the product is applied in a thin layer, it is now “open” to the atmosphere. This phase’s length is also greatly affected by the environment (temperature, wind, sun, etc.) as well as the system’s chemistry. “Open time” can range from 15 minutes in the case of some polyaspartics to hours when dealing with slow-cure, water-based polyurethanes. Back-rolling or touch-up work can be performed during the “open time.”

Tack Free – This occurs when the product is no longer sticky but is still soft. With two-part coatings, this is the phase when reapplication, known as the recoat window, should take place. The product is hard enough that you can walk on it in socks without leaving a mark, but soft enough that it’s still chemically reactive for cohesion between coating layers. If you were to apply the second coat before this phase, you’d risk trapping solvent that is evaporating. You could also damage the surface as it gets tacky.

Dry – This is when the film is no longer soft, and light foot traffic won’t damage the surface.

Fully Dry or Cured – The film is fully formed and no longer chemically reactive. The floor is ready for full traffic, finish coats or wax.

To answer the last part of your question, if the recoat window was missed you should apply a second coat after the surface has fully dried. When fully dry, sand the surface lightly with 200+ grit sand paper or screen, then lightly apply the coating.

The important thing to remember is the time it takes for sealers and coatings to go through these phases can vary greatly from product to product and from job to job depending on environmental influences. This means the same product may dry differently depending on where and when it is used, or how it is applied. Consult technical data sheets for the estimated times of the various phases, and always perform a mock-up or sample if in doubt or using a product for the first time. 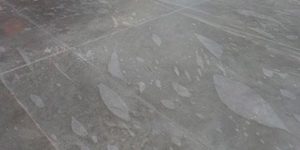 Cause and Effect of Curing Differential on Colored Concrete 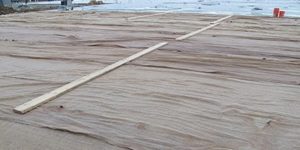