Advances in chemistry go beyond polymer-modified concrete to auxiliary products such as improved sealing and coating systems. One of the exciting new types of materials is polyaspartics.

Daniel Owen, vice president of Arizona Polymer Flooring, explains why polyaspartics make good wear coatings for cementitious toppings. “The big benefit I see to them is quick cure and rapid return to service. You get higher film build in one coat compared to two coats for a two-part urethane coating, so you have a shorter install time. And a polyaspartic is more UV-stable than an epoxy coating and has a bit better abrasion resistance.”

Polyaspartic coatings have some other differences too. Owen cautions that contractors may have to alter some work habits. For example, due to the quick cure time, they may have to change rollers every hour. Cain adds that sanding may be required between coats or when coating over other coating materials in order to get proper adhesion.

The high solids content (92 percent) means that the price per gallon can lead to “sticker shock” notes Daniel Owen. “Mil for mil, putting a polyaspartic coating on the floor is comparable in price to a two-part urethane.”

George Henderson says PermaCrete/Quality Systems Inc. is evaluating polyaspartics for coating products to be introduced soon. He likes the fact that the polyaspartic-coated surface can be opened to foot traffic in two hours, and that the film surface is bubble-free and extremely UV-resistant. He especially likes the low VOCs. “These are good times for chemical companies,” he says. “Sealers based on bad-actor solvents are being replaced with water-based sealers that are just as tough and strong.” 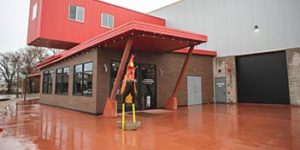 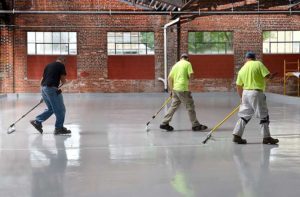 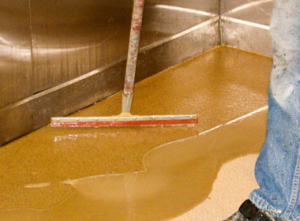 WearCoat 2015 Polyaspartic Primer Can be Applied at Low Temps