Since the first Concrete Decor Show in Phoenix, Arizona, in 2010, the goal has been to provide world-class training opportunities for decorative concrete professionals while also leaving behind something tangible for the hosting community. For the 2015 show, the hands-on workshops were held at The Julian Center, a well-known organization that provides housing and services to help survivors of domestic violence rebuild their lives.

On Sept. 28 and 29, trainers and students assembled at The Julian Center with a flurry of activity designed to improve a children’s playground, enhance a sidewalk by the entrance and polish a multipurpose room. Some returned on days following to finish projects that weren’t completed due to rain.

Rick Cockrum, chairman of The Julian Center’s board of directors, joined the Concrete Decor Show producer, Bent Mikkelsen, and Catherine O’Connor, the center’s president and CEO, for a dedication ceremony Oct. 1. Cockrum, who had never seen decorative concrete in person, was amazed at the workmanship and grateful for the donation. “It’s spectacular,” he said repeatedly. “The people who did this work are true artists.”

The Julian Center houses about 120 people a night who are seeking a safe haven, many of whom are children. “To have something that puts a smile on the faces of the families who come here to be safe is a wonderful thing,” Cockrum said. “Some of the women here won’t even make eye contact with you because their spirits are broken, but this playground is so inviting. They will get a lot more pleasure out of being here now.”

Read on for details about what the crews accomplished at The Julian Center, and visit www.ConcreteDecorShow.com and go to the “About” section, then to “Show Recaps” to read about this and past projects along with the companies who graciously donated to these workshops, with SureCrete Designs and Kingdom Products leading the pack.

Crews placed concrete for a racetrack-themed sidewalk around the perimeter of a fenced-in playground and integrally colored it black with Graphite donated by the show’s color sponsor, Kingdom Products. The design incorporated three, 15-foot-diameter concrete circles with stamped and colored street signs and a painted black and white checkered pit stop. The circles, as well as a half-circle surrounded by a seating wall poured and finished earlier, were stamped with a radial fan pattern from Bomanite.

The sidewalk was sprayed with Dayton Superior’s Top-Cast top-surface retarder, and was buffed and pressure washed to expose more aggregate.

Forms were created for half-round steps that were placed and finished on an outbuilding near the sidewalk. The steps were colored with Taupe and a Battleship Antique Release Agent from Kingdom Products.

Daniel Ramsey of Day Excavating in Marion, Indiana, a company that stamps, stains and excavates, took the class because it was a company perk. “My boss likes education so he sends me to these classes,” Ramsey says. “I do 99 percent of the stamping. Why not stay on top of anything new that you can use in your work?” 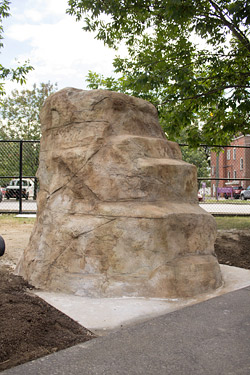 Students created a 4-foot-high rock using a frame of three pieces of rebar and lath topped with Quikrete Type S basecoat and H&C Stampable Overlay. Using brushes and hand tools, they learned how to carve and texture a fabricated rock with small steps on one side to allow kids to get a foothold for climbing. To make it look natural, students used Butterfield Color release powder along with a mixture of natural-looking colors.

Clients at The Julian Center create mosaics as part of their healing process, with some on display in the center’s lobby. They were the inspiration for the sidewalk art, which begins near the center’s entrance with a mosaic design that breaks apart and then recombines as a symbol of the journey of healing.

At the beginning, a circle shows a fractured, black-and-white image of a house, symbolizing an emotionally upsetting home environment. As the sidewalk continues, the mosaic pieces flow alongside empowering statements. At the end, the mosaic pieces come together into a colorful and whole image meant to strengthen the healing process.

The mosaic pieces were engraved into the sidewalk and the statements were stenciled on. Smith Paint Products donated the water-based stain colors for the sidewalk — all were from the Bright Light series — and the purple and red match the center’s logo. Arizona Polymer donated the sealer.

Steady rain on the second day of the workshop washed away a lot of the students’ prior efforts. Several students and the instructor returned on their own over the next two days to finish the job. 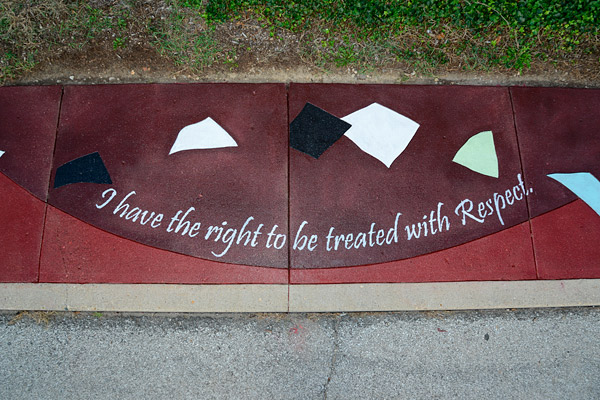 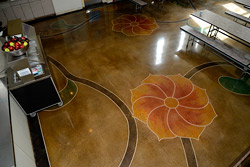 Engraved Flowers and Vines
Course: Beyond the Basics: Decorative Effects for the Polishing Contractor
Trainers: Jeremy Wilkerson of Dreamkrete and Rick Lobdell of Concrete Mystique Engraving

The week before the workshops, Nick Dancer and Jacob Janssens of Dancer Concrete Design tore out the high-maintenance vinyl floor in the center’s 1,500-square-foot multipurpose room. Students then helped instructors Jeremy Wilkerson grind the floor to remove surface contaminants before Rick Lobdell demonstrated how to engrave four 3-foot-diameter flowers connected by vines with leaves. Students helped apply an array of Surfkoat polishable dye stains to the flowers, then covered them up and stained the main floor background. The floor was burnished and polished to 3,000 grit. 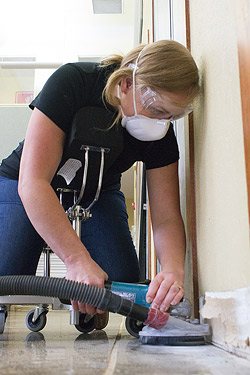 During the job, a sprayer misfired while a student was holding it, and dye went all over the place. This mishap, which was fixed, was an important learning opportunity, Lobdell says. “If you go to a workshop with a slab poured just right and equipment always works perfectly then are they really training you? Things go wrong in real life all the time, and you have to be able to deal with something that doesn’t work perfectly like it’s supposed to.”

Participant Crystal O’Dea, a stay-at home mother from The Woodlands, Texas, is in the process of starting a decorative concrete business with her brothers and is learning from the ground up. “A friend of mine works for Husqvarna and recommended that I come to the Concrete Decor Show and take the ST-115 Certification class and I wanted to take this one,” she says. “I like that you can get in here and actually do it and these guys are answering a lot of my questions. I thought everybody in the class would be newbies but there are all kinds of people here with all different experiences.”

Abdullah al Eleiwi, 28, traveled from Saudi Arabia to take the class because he wants to start a concrete business in his country. “There’s not a lot of concrete there but I want to start doing it,” he says. “As of now, one in 100 houses may use concrete because in my country everyone wants to use marble. But I have a lot of ideas and I want to bring back something new.” 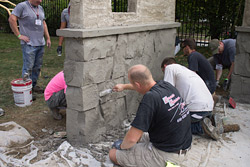 Students applied Kingdom Products Imperial Vertical Carving Mix to two walls of a picnic shelter and stained them with a variety of the company’s Olde World Stains. The top halves of the walls were stamped with a brick-patterned foam board made in class, with grout lines created by applying acetone to eat away the foam. The bottom halves of the walls were hand-carved to mimic the look of stacked stones. A table and benches from the precast workshop taught by JM Lifestyles representatives completed the ensemble.

Class participant Johanne LeClaire from Winnipeg, Canada, has been to two previous Concrete Decor Shows. The owner of a decorative painting and concrete polishing and microtopping business since 2000, she says, “I came to get re-energized and come away with new skills. I really enjoy coming to these events and getting to do things and really learn from the hands-on teaching.” 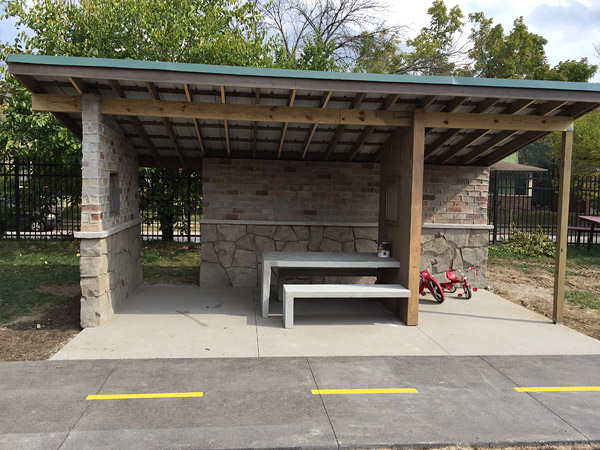 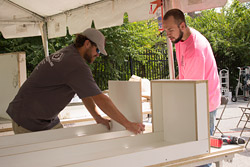 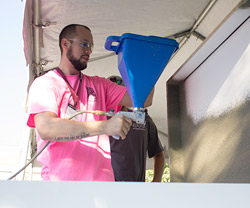 company Brains and Hammers in Abuja, wants to learn how to use more decorative concrete in construction. 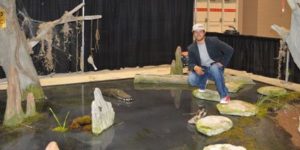 Crowning the Top Brawler at the Concrete Decor Show 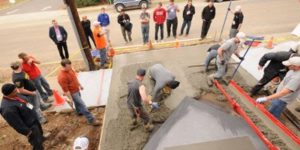