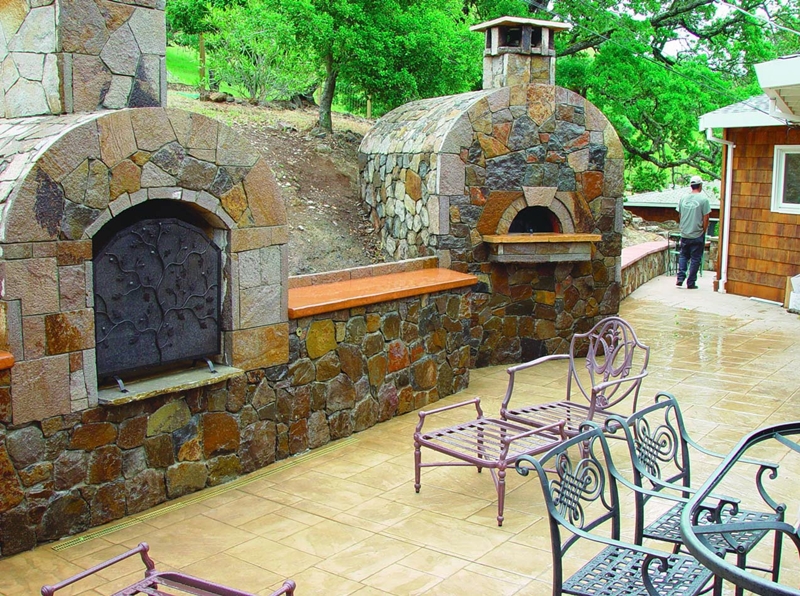 Lee Levig is always looking down, yet looking forward at the same time.

Levig, an innovator in decorative concrete and owner of Concrete Works of Fairfield, Calif., is constantly checking out what he’s walking on — concrete floors, driveways, sidewalks — with the idea that new ideas can be found anywhere. It’s not unusual for Levig to buy a disposable camera on the spot and start shooting pictures of a concrete floor when he’s out with his family. It used to bother his children, he says; now they just roll their eyes.

Levig calls himself a mad scientist, and he is always experimenting. He pours about 200 samples a year. He mixes his own colors, makes his own texture skins and even makes his own embossing tools, giving his work a one-of-a-kind appeal.

This level of research, combined with a strong focus on art and design, has earned him a solid reputation as a craftsman who is always looking ahead.

Concentrating on the San Francisco Bay area and Contra Costa County, Concrete Works takes on high-end residential projects that allow Levig and his crew to get creative with colors, acid stains, stamps and textures on driveways, pool decks and patios. Ninety percent of the company’s work involves decorative applications for custom homes. Some are “super customs,” Levig says, which can be as big as 33,000 square feet. 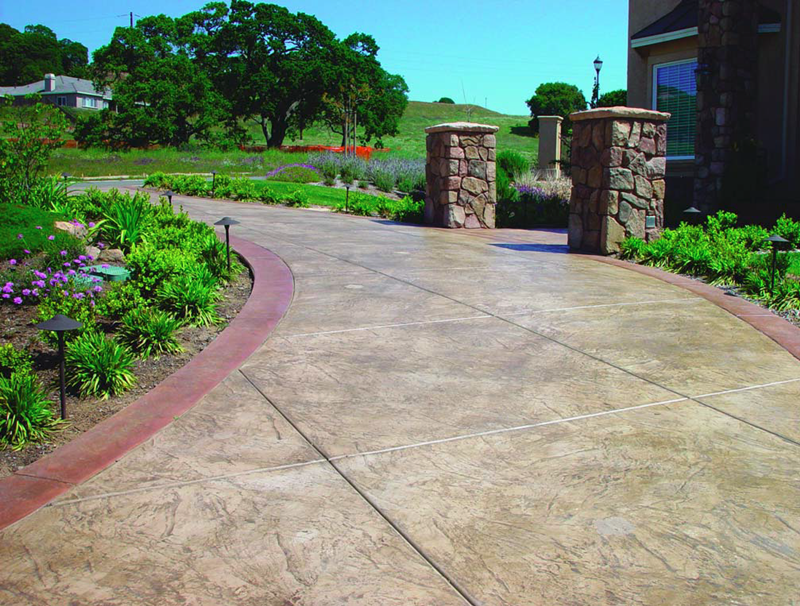 Creativity was not a requirement in Levig’s first career — banking — but it was through the financial world that he found his way into concrete in 1987. He was working as the controller of a friend’s concrete business, and was asked to pitch in when there was too much work and too few hands. Levig enjoyed the physical labor and working outdoors, and realized that his confining cubicle had to go.

“I love being outside, and when you’re locked in an office doing paperwork every day, it’s not a great way to make a living,” he says.

Levig started helping one of the finishers, who spent his free time pouring patios. Levig started working weekends too, and eventually started his own business creating decorative patios for tract homes. He started experimenting with exposed aggregate borders, joints cut in different patterns, shells or leaves embedded in the concrete, and carvings — twining ivy for example — incorporated into the design. He became known as a contractor with an artistic eye, and his business grew.

Since Levig struck out on his own right away, he had to teach himself the trade. His competition certainly wasn’t giving out any free advice. For the same reasons, Levig won’t say much about his own innovations. But he’s always looking to learn more. He takes ACI courses every year and attends seminars at the World of Concrete. In fact, he believes education should be more accessible — and more affordable — to elevate standards in the fast-growing decorative concrete industry.

“It seems like we’ve strayed from the word ‘craftsman,’” Levig says. “I’d like to see that come back. I’d like to see people take pride in their work. I get sick of hearing,’That’s good enough.’” 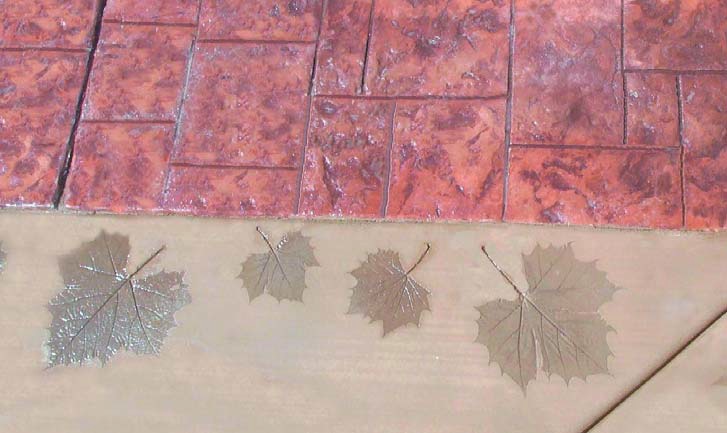 Levig now has a crew of seven, most of whom have been with him for six or seven years. He credits his company’s success to the crew, who keep high standards and work as a team. In fact, they closely examine every third job or so, critiquing their work and giving themselves a letter grade, from A to F. “Every now and then you have to slow down and look back and not worry about whether you’re paying these guys for three hours to critique themselves,” Levig says. “It’s one of the best things that we do, and you can find something wrong with every job.”

This attention to detail led two of his crew members to design an embossing tool that creates an unblemished surface at the point where two stairs meet, solving a common problem when the release isn’t clean and the concrete is flawed.

Levig designs every job, but always listens to the crew’s ideas and lets them be as creative as possible. Even if the idea won’t fit that particular job, it might work well the next time around.

He enjoys working with color — he uses color hardeners with acid stains to bring different colors into the concrete — along with a constantly changing menu of other techniques. Many contractors get trapped in a “paint-by-numbers” style of doing things, Levig says, but he mixes mediums to get different effects. “There’s a lot you can do to change the texture and change the look from the guy next door.” His use of texture mats, stamps and custom colors is a good marketing tool, but Levig does it because he loves it. “I get bored doing the same thing.”

He’s doing a lot of work with texture mats lately, although he enjoys acid work and carving up a slab with a decorative element such as the Aztec sundial he recently cut into a driveway. He’s also started using embossed wallpaper to create crisp, detailed art nouveau borders.

“I don’t call myself an artist, but I am a craftsman and I enjoy using my passion for art as part of my craft.” 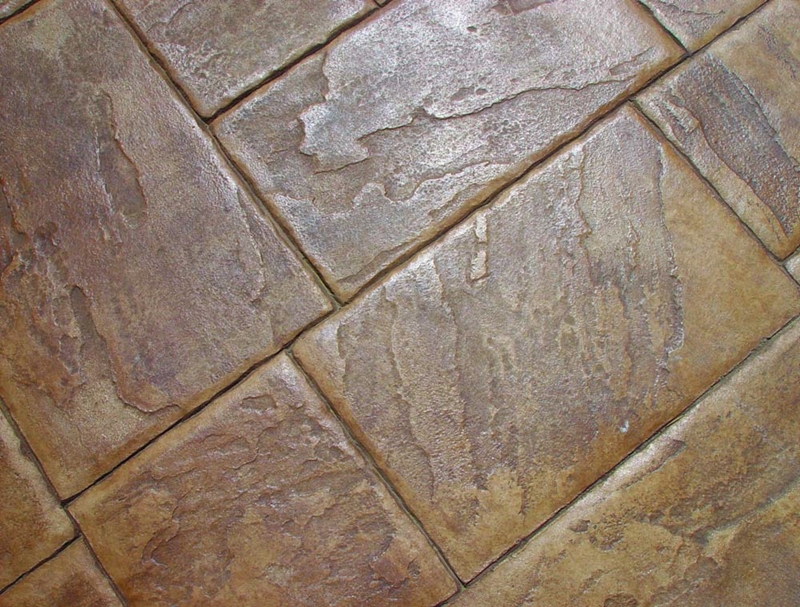 He is absolutely committed to making sure the colored concrete doesn’t overpower the natural environment. In fact, he believes the concrete should NEVER be the focal point.

“Colors are an important aspect of the job,” Levig says. “In order to get things to blend and look natural you have to fool the eye. One of the crucial elements to that is to make sure the colors blend in with the surroundings, so it’s not the focus when you walk up to a project.”

For example, he used different colors to make a concrete entrance look so neutral that the eye is drawn toward the door, which should be the main attraction. He also worked on a wood-sided house with a translucent green stain over it. Levig poured sample over sample until he could get the color of the driveway to match the house almost perfectly. Once again, the concrete was disguised so the entryway could be the focal point.

“I hate it when I see these guys do these vibrant colors,” he says. “The idea is to enhance what’s there, not draw the attention to your work. It’s not a painting you put on the wall.” 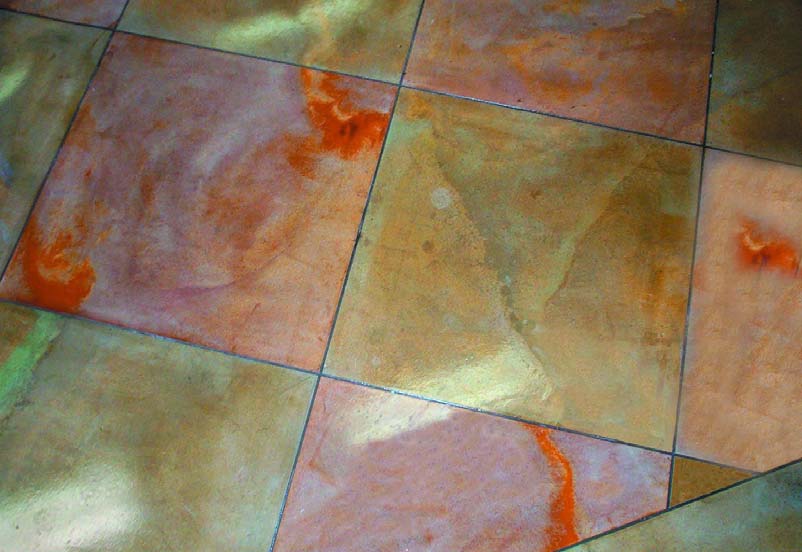 Concrete is a fluid medium and the variables have frustrated every concrete contractor, but Levig controls what he can. When the concrete truck arrives, the crew is ready for just about any problem that can come up. Good design and preparation are key. He doesn’t overpour, he stays on schedule and he keeps his promises.

His business is busy but manageable. He feels fortunate that he doesn’t need to market his work since it speaks for itself. His new jobs are based solely on referrals.

“If you work hard and you’re honest, everything is going to be OK,” he says, “and the guys around me believe that too.”