Recently an architect who was writing the polished concrete specification for a school district contacted me when he recognized that he did not know enough. The good news is that he asked for help in crafting an informative and realistic specification that allows educated bids with room for profit.

The architect started with an old specification provided by a contractor. We discussed objectives such as use and durability requirements, flatness, concrete mix design, and curing, along with the design aspects, such as the “reveal” (amount of aggregate, sand, or cream to expose), color options (topical and integral), level of shine, and maintenance. After two hours, the architect had much to discuss with the school district and their designers.

Next, we concentrated on trying to fit the new durability and appearance decisions into the existing spec. This took seven hours over three days. He was truly interested in learning how the district’s expectations could be achieved.

He understood that this could be accomplished, not by finding the best warranty, but by writing the 03 30 30 Cast in Place and the 03 35 43 Polished Concrete Finishes specs with clear details regarding schedule, the experience level required for the contractors, and specific products that would be used to accomplish the performance objectives.

I agreed to rewrite the 03 35 43 specification from scratch, using some acceptable sections from the original, and sent the draft to the architect for review. This time he marked up the spec and sent it back. Now he understood the importance of the details, and he wanted clarification so he could add specific requirements for this unique building design.

At this point, a pair of flies were found in the ointment. First, the school’s interior walls were CMU block to be installed after the slab pour. The architect grasped the significance of this detail when he learned that heavy CMU blocks would damage the concrete when dropped, so we added special slab protection to the interior block spec. This alerted the GC and installer to this extra amount of work, cost and scheduling.

Second, when a block wall is built, mortar becomes smeared onto the face when detailing. An acidic cleaner is required to remove mortar smears, and any unspent acid will etch the floor upon contact. So instead of going with curing by other methods, we specified a high-solids cure-and-seal to help protect the concrete surface from the acid. We also changed the “reveal” level to “Exposed Aggregate,” allowing for an aggressive first cut that would fully remove the cure-and-seal from the surface without chemicals.

This is where education and experience pay off.

A decade ago I was involved in a similar school situation with CMU walls and polished concrete. Back then, I did not have the level of understanding I do now, and neither did the architects or contractors. Muriatic acid was used to remove mortar smears, and naturally, the acid ran down the walls and onto the floor. The concrete surface was deeply etched.

With neither time nor money in the budget to expose aggregate, the school opened with the floors unfinished. For months, the contractor polished during nights and weekends. It became a major point of contention with lots of blaming and finger-pointing. During summer break, to cure the roughness, the entire school floor was coated with clear epoxy. What a waste! It was an expensive lesson, but that education helped us in this current project.

With the new 03 35 43 spec almost complete, we started adding details to the 03 30 30 spec so that the slab would be flat, protected with high-solids cure-and-seal, and finished without the burn to allow deep, rapid cutting. With these details in mind, the district agreed to hire a concrete testing company to monitor each pour and report results the same or next day, so that any issues could be caught early and remedied quickly.

Communication and education continued. The architect interviewed general contractors from the invited bidders list. He described their added responsibilities and encouraged the GCs to bid accordingly. This process continued down the food chain. Concrete contractors were informed of the expectations and told to reflect them in the bid. Certified concrete polishers knew that they would be polishing a flat, unburnt slab that had been cured with sealer, and that full aggregate exposure was expected.

Prior to breaking ground and building the foundation, the architect met with the school district’s representative, GC, concrete contractor, polishing contractor and me. We reviewed the schedule and continued to educate about the particulars. We painstakingly explained tiny details, and sometimes the discussion became heated — some contractors had overlooked certain parts and were complaining. The architect and owner’s rep stood their ground, and in the end each contractor agreed to the scope of work and schedule.

This project is now underway. The concrete has been poured, cured, and protected. The team is off to an educated start! There will be a walk-through with the construction team prior to starting the polish. Once polishing is underway, if issues arise, all parties can refer to the original notes and specification, rather than simply blaming the polishing contractor. We are working hard to achieve properly managed expectations that will build respect among all parties.

Is this a lot of work? Absolutely. But the benefits are clear. The next job this architect specifies will be much less time-intensive, the school board will build its next school with polished concrete, and the general contractor should be on schedule and on budget.

Most importantly, the certified polishing contractors will get paid and have a project that they are proud to call theirs, and most likely they will polish the next school with the same educated team. 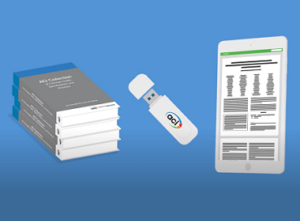 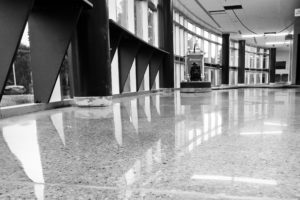 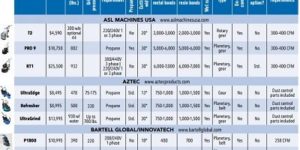