One of the top results is an entry that offers a glimpse of a polished-concrete installation at the Google campus in Mountain View, California, by Bay Area Concretes (BAC) in Livermore, California.

Polished concrete, it turns out, has become a hot commodity in the high-tech mecca of Silicon Valley and surrounding communities.

And why not? The leadership and management of these companies are known for being forward-thinking, innovative and attuned to providing cutting-edge work environments that stimulate more of the same —innovation, creativity and collaborative approaches to technology development.

It only makes sense that Internet colossus Google would take an interest in cutting-edge and worker-friendly building and design concepts, with the additional asset of an environmentally friendly profile.

With a cost in the neighborhood of $4 to $5 per square foot, Price says, the installed price tag for polished concrete is comparable to vinyl composition tile (VCT). But, he points out, “the architectural possibilities are endless and the maintenance is much less with polished concrete.”

Adrian Henry, executive vice president and part owner of Diacon Concrete Polishing in Manteca, California, cites a project his company has executed at Google locations in Mountain View. In these installations, carpet was removed and the concrete floor underneath was densified and diamond polished.

“They liked the clarity of polished concrete,” Henry says. “It gave a better overall appearance for the workplace. Also, these companies, like Google, want to be on the cutting edge.”

Stimulating work with bottom-line benefits
Henry says Google “is all about doing whatever they can to put employees in a better frame of mind while working.” Polished concrete, with its enhanced reflectivity, contributes to a brighter environment. And, Henry notes, the company also pays attention to the affordability side of the equation.

“The bottom line at the end of the day is that, whether it’s Apple, Google, whoever, they have someone somewhere looking at where they can manage some cost savings,” Henry says. In addition to the potential for reduced lighting costs, polished concrete offers cost-savings in maintenance over carpet or VCT because of the cleaning needs of carpet and the wax stripping and cleaning of VCT.

Diacon has worked with Twitter in the past, and a major job for Apple is in the works. That job involves an auditorium where unveilings of the iPhone and other hot consumer-tech products are staged.

Diacon has seen its polished-concrete business expand rapidly over the eight years it’s been in business, Henry says. He joined the business when it was engaged in its second polishing job, and immediately saw a need for improved work practices and a more comprehensive approach to the projects. He says this approach means a review of the scope of work in the beginning and a review of the entire floor or scope of work with the owner, addressing all potential issues such as patch work, joints or spalls.

New directions and growth areas for the business, he says, involve removing VCT prior to polishing (rather than subcontracting that task), and pouring/polishing concrete overlays. Most often, the client’s objective is uniformity of the highly refined, polished surface, although some design-savvy clients opt for a striking color or colors, patterns and the inherent “character” of flaws and imperfections in an existing concrete surface. Overlays, he says, are gaining ground due to their uniformity attribute.

But highly polished gray concrete remains a typical preference of the big high-tech companies. Diacon has executed several polished-concrete installations for data-center company CoreSite, and Henry says he suggested the addition of colored glass to tweak the look. “But they like CoreSite gray,” he says.

Nancy Yusuf, a former project manager for CoreSite, says the company thinks polished concrete is an optimal fit for data-center facilities. “It’s durable for moving equipment on a daily basis,” Yusuf says.Referring to a recent polished-concrete installation at a CoreSite building in San Jose, she says, “We needed something strong and durable but that looks nice, too.” CoreSite leases space in the building to other users, “so we wanted it to look good. We want to make it into a Class A building.” The custom CoreSite gray color serves a branding function as well, she adds. 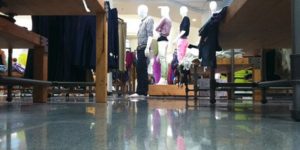 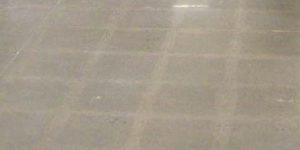