Bob Harris had wanted to tackle replicating the breathtaking floors of the Santa Maria della Salute, commonly known as La Salute, ever since he first laid eyes on them. The founder of the Decorative Concrete Institute and senior decorative concrete consultant for Structural Services Inc. had visited the Catholic basilica in Venice seven or eight times and had studied the cut marble floors in detail. He thought how cool it would be to pay homage to the 15th-century Venetians by recreating their artwork in his own backyard.

But his wife, Lee Ann — president of DCI and the more practical of the two — kept putting off the project. She asked if he realized how long it would to take to complete. She also asked how many cuts would be involved and how many hours the coloring alone would consume.

Bob had tried to convince her three times at their old facility and when they began building the new DCI training center in Temple, Georgia, “I knew the subject would come up again and I wouldn’t stand a chance of talking him out of it,” Lee Ann says.

And, as usual, she was right.

The first challenge the couple encountered when designing their remake of the Salute floor in their showroom was scaling down the design from about 120 feet across to fit into an area roughly 25 feet in diameter. There were three elements to incorporate: an inner circle with a floral design, a mid portion with an arching 3-D pattern and an outer circle comprising different medallions.

Starting in the center using a radius pivot point to lay it out, the Harrises hand drew the design on the concrete with chalk, soapstone and pencils. To keep things consistent, they made various-sized rectangular and diamond-shaped templates that they moved around so they didn’t have to measure every single facet of the design.

Each medallion, however, was individually laid out by hand. The detailed rose design in the center and repeated in a band in the mid portion was created with Flattoo stencils from Surface Gel Tek, Bob says. 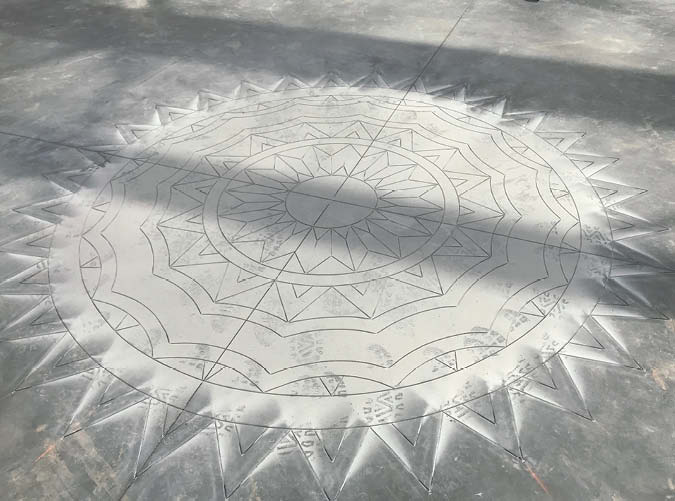 Drawing the design — a version of 16 concentric circles — on the showroom floor took about three days to complete.

Then the cutting commenced. Bob estimates he and Lee Ann made more than 13,000 independent saw cuts. And as incredible as this may seem, he and Lee Ann used two tools to recreate these Venetian masterpieces: a 4-inch grinder with a diamond blade and a shop vac to collect the dust.

“I cut the whole thing freehand and bent over like a football lineman in a crouched position,” Bob says. He added that at 56 years old, he wasn’t built to be in that position for as long as he was.

Tools of the trade

Although he says there are some great tools on the market for engraving, such as Engrave-A-Crete’s Mongoose, the 4-inch grinder was the ticket for this job. “There were so many stopping and starting points in the design that not overcutting was a real challenge. The 4-inch grinder gave me the ability to control that,” Bob says.

Overall, the saw cuts add another dimension to the design whereas stencils, because they are part of the same level surface, don’t create that 3-D profile. They only used stencils on about 1/10 of the floor, he estimates.

When the cutting was complete, they polished the floor and brought it up to a 400 grit. Next, Bob and Lee Ann used DCI’s water-based dyes to color the modern-day masterpiece. The colors were Onyx, Mahogany, Wheat and a blend of Sunbaked Orange and Tree Bark.

The floor was then lightly cleaned and DCI densifier was applied until refusal. This was followed by 30-40 minutes of auto scrubbing to clean it again. Once the floor dried, 800- and 1500-grit resins were run and a coat of polish guard was applied. Finally, the floor was grouted with sanded tile grout to fill in the saw cuts and burnished.

“The grout fills the joints, making it easier to keep clean,” Bob explains. At the same time, “The grout defines the pattern, making it stand out. It adds a very important dimension to the floor.”

In addition to the showroom floor, Bob and Lee Ann created 3-D Venetian-inspired designs with very detailed saw cuts on the office floor and in the warehouse. A recent DCI polished concrete class helped with the warehouse design. Aside from the Flattoos, they cut all the designs free-hand with a 4-inch grinder.

Lee Ann says her favorite part of this project was watching it come alive. “Each color added new dimension,” she says. This inspired her to push through and keep going.

As educators and trainers, she continues, she and her husband strive to inspire those who come to them to learn, something she feels they’ve done throughout their careers. “When someone walks into our facility and says, ‘I didn’t expect anything less,’ that means we’ve done our job and have lit a spark in someone.”

Bob credits his drive for producing above and beyond the expectations starting back in his childhood. “My father was a big influence in my life. He was very strict and expected perfection in everything I did. If I was 1/8 inch off, it was not acceptable. As a young man, I didn’t understand (why he was so driven) but I have nothing but respect for him now,” he says.

After a stint in college, Bob ended up at Disney World where perfection was the norm. “If something wasn’t done to their standards, it would get ripped out and redone,” he says. That mentality, he adds, was etched into his psyche and continues in his endeavors today.

“When Lee Ann and I approached these floors, we needed total concentration and needed to stay focused,” Bob says. During the decorative process, he coached himself using an analogy that he often recites to his students. “You’ve got to be like a pro athlete and get in the zone. At that moment, nothing else matters.”

To achieve floor designs such as the ones in the Harris’ new training facility, “It takes practice, practice and more practice. Don’t start off with a floor like this. Start with more basic designs and improve your confidence level before tackling more difficult designs. Like I always say, it takes years to be an overnight success.”

On his and his wife’s many visits to Venice, Italy, Bob Harris was always in awe of one Catholic church near the entrance of the Grand Canal. In particular, the concrete floor specialist marveled at the precision involved. This included the hand-cut marble pieces that formed the unforgettable floors of the Santa Maria della Salute (Saint Mary of Health). After all, Venetians had built them centuries ago — from 1631-87 to be precise.

Prior to the Salute’s construction, the plague had ravaged the city in 1630-31. It wiped out about a third of the population. The Venetian Senate prayed to the virgin mother to intervene on Venice’s behalf and stop the pestilence from claiming more lives. The epidemic was stemmed and in return for prayers answered a magnificent Catholic basilica was to be erected in Mary’s honor — with no expense or effort spared.

A competition was held to design the “plague church” and Baldassare Longhena, an up-and-coming 26-year-old architect, was selected. He designed the crown-like, domed octagonal structure in the then-fashionable baroque style ringed with classic and Byzantine elements.

According to the Lonely Planet, “The lines of the building converge beneath the dome to form a vortex on the inlaid marble floors; some believe the black dot at the center radiates healing energy.”

When recreating the floor in their new training facility, “It was important for us to be respectful of the floor and try to capture all the same elements,” Harris says. 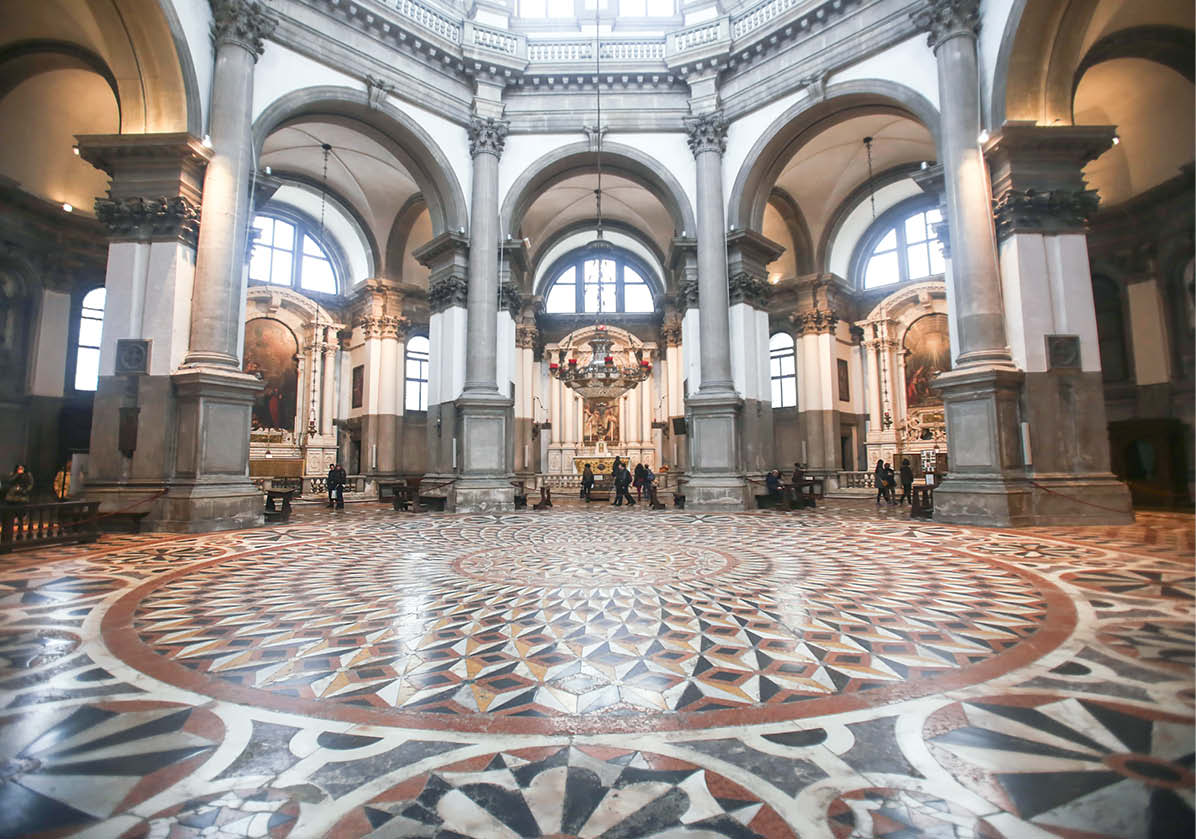 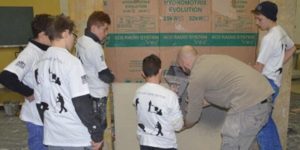 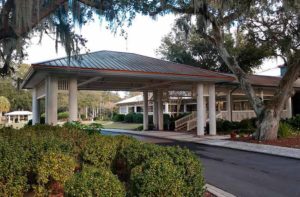