The project required Wayne, owner’s representative Ian Prince, and Bob Hogan, the vice president and project manager for general contractor J.K. Hogan Inc. to fly all the way to Atlanta to visit the Decorative Concrete Institute and experience such surfaces first-hand. The client funded the trip. 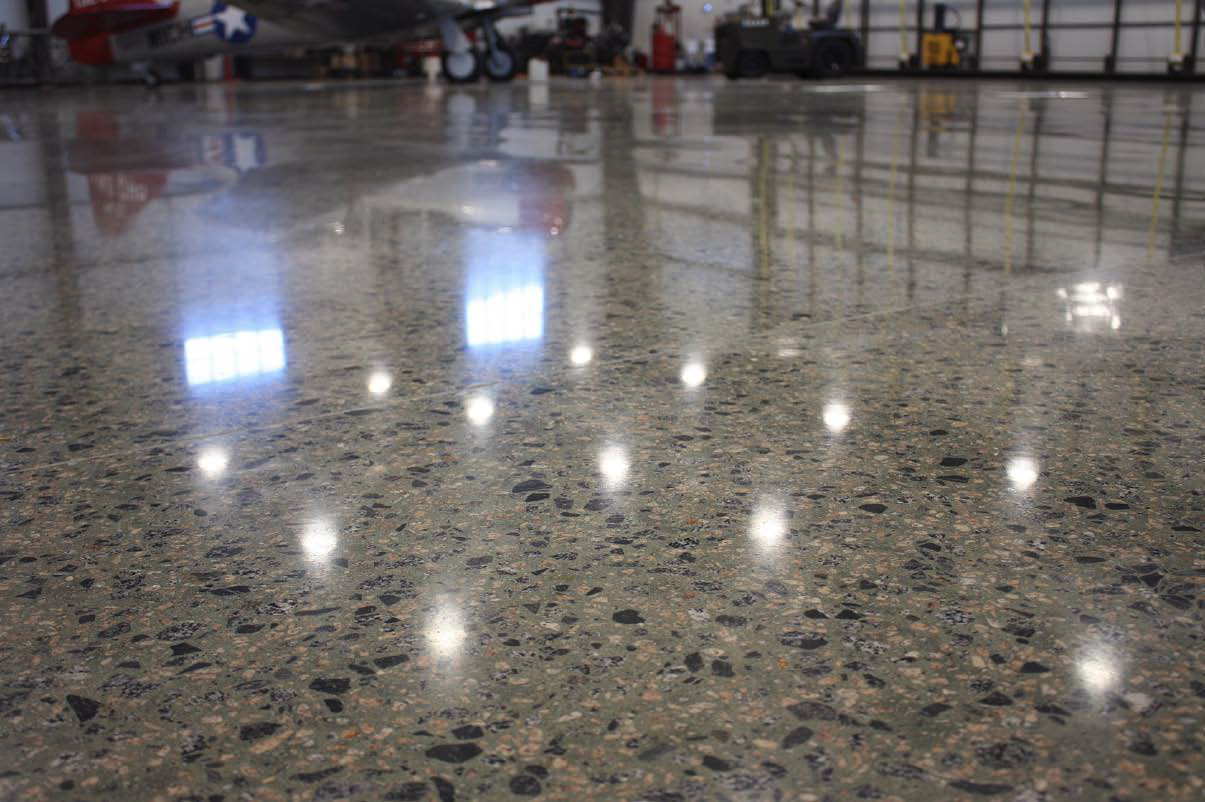 “We were able to talk about polished, exposed-aggregate floors with integral color while actually walking on them,” Wayne says. He says the DCI trip was instrumental in helping the team formulate an overall approach.

Wayne knew this project would require his fullest attention. He understood all too well that colors can shift slightly in larger pours due to slight inconsistencies in each batch and a variety of other reasons.

The question of using liquid or powder colorant is also a concern. Adding large amounts of liquid color increases the liquid content of the mix, which can affect slump results, while adding powders increases the dry mass, making it more difficult to dial in the additional amount of water needed to maintain workability.

To further complicate matters, the specs called for radiant heat flooring, which would be fueled by solar panels and a backup propane-fired boiler. Beaver Brothers Inc., a HVAC contractor out of Salisbury, N.C., experienced in radiant heat flooring systems, was selected for the job.

The tubing for this element had to be placed prior to the pour and supported so that it would remain at the lower third of the slab. It had to be raised off of the embedded insulation while remaining deep enough from the surface to accommodate saw cuts for joints. (There also were aesthetic concerns with the solar panels — none of them could be seen from the air, which meant they could not be fixed to the roof.)

One bite at the apple

Steve Ragan, P.E. and vice president of technical services with Concrete Supply Co., of Charlotte, was chosen to dial in the concrete mix. There was very little margin for error. “We all knew we had one shot at this,” Ragan says. “We had one bite at the apple.”

After much trial and error, Ragan had a recipe he felt would be just right. Granite aggregate from a local quarry was selected based on its unique pink veining. Ragan chose a 3/4-inch, No. 67 stone for the large aggregate and a 3/8-inch, No. 78 stone for the small aggregate. “You get this pink hue that is very attractive,” Ragan says.

Sand not local to the area was selected based on its much lower water requirements. The combination helped greatly improve the overall shrinkage characteristics of the finished slab.

The overall distance from the ready-mix plant to the job site was about 20 minutes. Ragan operated a truck for that length of time to simulate the trip. He timed revolutions and checked the slump to make sure that he had everything absolutely right. An olive-green dry colorant from L. M. Scofield was added to the mix, and water was adjusted accordingly until the slump was perfected.

Ragan stressed the importance of not rinsing the concrete trucks with water when they returned to the plant. “Everything was so finely tuned,” he says. “The last thing we wanted to do was introduce more water to the mix, which could have resulted in subtle shifts in color across the slab.”

Now that the mix was perfect, samples were needed to show the client.

“To avoid having to polish four or five different samples, we decided to pour concrete cylindrical samples and cut them in half to show the client how the color and aggregate would look together,” Hogan adds.

Hogan tried more combinations and ultimately came up with a combination that used 50 percent less color, along with the right amount of larger aggregate combined with a little more of the smaller, to get the look that the owner wanted.

For the pour itself, Wayne opted for a telescoping pouring mechanism called a telebelt. This type of unit allows trucks to pour directly into a hopper, which utilizes an articulating belt system to deliver concrete across broad areas without disturbing the floor.

“There were so many critical items involved in this pour,” Hogan notes. “We had to secure the radiant heat tubing, make sure the wire mesh was in the proper location during the pour, maintain the quality and consistency of the mix and hope that the telebelt and finishers did their job.”

EWI dedicated several experienced finishers to monitoring the slab to be sure that the piping did not float up during the pour. The tubing was pressurized during the pour to ensure that it stayed intact throughout the operation. Beaver Brothers had a technician on-site in case the tubing needed repairs during the pour. A 52-meter pump was on-site as a backup should the telebelt fail. The pour went off without a hitch.

Wayne’s crew stepped in to finish the concrete using Wacker ride-on trowels. Grinders were used to expose the aggregate and add a smooth finish. The crew started with 40-grit metal bonds to expose the aggregate. They then used 80 grit and 150 grit. The floor was then cleaned and densified with a liquid hardener before a switch to resin diamonds.

The polishing process involved several passes of resin diamond polishing heads, starting with 100 grit, then 200, 400, 800 and 1,500. The surface was burnished using 3,000-grit resin diamonds. In total, Wayne’s crew went over the surface of the floor 12 times. The entire process took four weeks.

“It was an excruciating schedule,” Wayne says. “But in the end, everyone was very, very pleased.”

The finished result was 12,000 square feet of concrete placed in one 280-yard pour. A special sand that required less water was used, and a small amount of retarder was added to each batch for workability. The floor is French-drained at the front and slopes 4 inches from rear to front.

As for the solar panels, 26 were custom-attached to the southern side of the hangar to fuel the radiant heat flooring, which is backed up by the propane heater in colder months. An olive-green integral dry colorant was added with bicolored pink-and-green aggregate to Types I and II concrete. The floor was sealed using Armor Surface Shield, from Concrete Polishing Solutions. 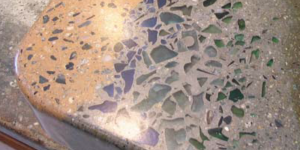 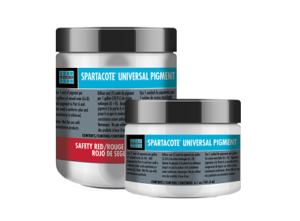 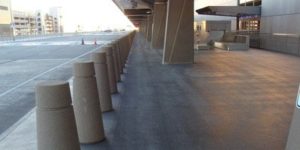