It has been nearly a year since I’ve started off my column with, “I’m flying at 36,000 feet,” and today I’m at it again, this time from Portland to Houston. There have been many changes in our industry during the past 8 months, primarily positive, but not always.

Our economy has taken a dive into the deep end, affecting some regions more than others, but generally affecting us all. So now is a good time to reflect on what exactly polished concrete is, and where polished concrete came from. As you move ahead in 2008, remember that polished concrete was first created to fix spalling and dusting concrete in industrial applications, and as new construction slows down it is natural for investors and owners to look at fixing what they have. “Fixing what they have” is where we came from, so look to your past to predict your future.

As long as we all can agree that polished concrete is the marriage of mechanical grinding/polishing to chemical densification/hardening, than polished concrete can be viewed as presenting a variety of faces. But before we can accept that question, we must first address “What is concrete?” Without knowing the foundation for the industry, you present unnecessary hurdles to your, and the industry’s, successful growth.

Concrete is a mixture of water, sand (fine aggregate), gravel (coarse aggregate) and cement. This mixture, when correctly mixed, poured and finished, will become the canvas for your polished concrete floor, your masterpiece. Due to geological variations throughout North America, you will need to learn how to reread concrete if you travel between regions to work, and sometimes even how to reread slabs within the same job site. Learn this mantra: “Keep your eyes open, and test before you proceed, as no two floors are alike, conceivably even at the same site.”

When concrete is finished, proper water-to-cement ratios are as important as proper power troweling. If specifications aren’t followed, the natural variances that occur from slab to slab or pour to pour will be magnified and result in a slab that is wavy, has bug holes or is too soft.

When the surface receives a hard steel-trowel finish (per ACI 302), the cement particles are tightly and uniformly being consolidated around the fines that have been brought up to the surface by the power troweling. This face area is the foundation for your work, an area we at L&M refer to as roughly the top 1/8-inch. In fact, Phil Smith, whom I work with, refers to this as the near-surface wear zone, and it will never be as tight and dense again once diamonds are utilized to cut the cream.

When you cut the floor surface with diamonds, you are generally eliminating some or all of the tightly packed cream, and in doing so, you expose thousands of micro-pits in the surface. These micro-pits require chemical densification to create a crystalline structure within the slab that mimics the original portland cement hydration process in which calcium silicate hydrate is formed. This process occurs with the addition of a liquid densifier with a sodium, potassium or lithium-based silicates formulation. (Note: All three silicates begin as sodium silicates, and the potassium and lithium are created through double chemical replacement. There are differences in these products, but I won’t get into that today.) Calcium hydroxide makes up 15 percent to 20 percent of cement paste, but it is known to be soft. Without the hardening process that occurs with the addition of silicates to create additional calcium silicate hydrate, the remaining cement paste would wear prematurely.

To fully understand polished concrete, it is absolutely necessary to understand that there is a difference between concrete floors that only receive the mechanical step in the polishing process vs. floors that received the mechanical and chemical steps. If you remember the first paragraph, the concrete polishing industry began as a means to eliminate dusting and spalling of existing concrete floors in industrial applications. It is not unusual to be able to create a polished floor without chemicals, but it is impossible to gain the added abrasion resistance or eliminate the natural deterioration of concrete that we refer to as “dusting” if you do not add the silicate densifier.

Now that you have a deeper understanding of the densification/hardening process, it should make more sense to you that when someone says, “I don’t densify,” they don’t understand polished concrete. Even if you do not agree as to what diamond steps make up a polished concrete floor, you now understand that without the addition of the silicate-based densifier, you are not providing your customer with a long-term solution to their long-term need, which is increased abrasion resistance coupled with greater repellency and the elimination of concrete dust.

To sign off, I am going to start addressing one industry myth or misperception at the end of every column. Today’s misconception is that you are making the floor “tighter” through your mechanical polishing steps. Remember when I described the micro-pits that are exposed during the grinding process. It is not unusual to hear an installer refer to using the upper polishing grits as “tightening up” the floor. In fact, your mechanical steps do nothing to close up those micro-pits. Rather, they are reducing the profile of the scratch pattern your diamonds have created. Our visual sense of something being “polished” is in fact the increase in a surface’s ability to uniformly reflect light, rather than refract it in an uneven, unparallel pattern. “Tightness” is a function of the crystalline structure growth that occurs during chemical interaction between the silicate and the calcium hydroxide, not the reduction of scratch pattern during the polishing stages.

Good luck in the coming months. Remember that being properly educated is the foundation of your success. 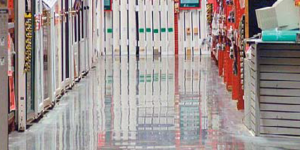 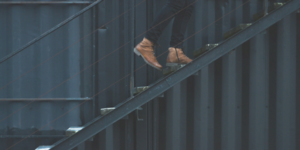 Reflecting on Polished Concrete and How To Continue Improving Your Skills 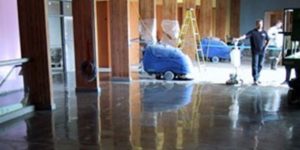 A Look Back at Polished Concrete’s First Decade