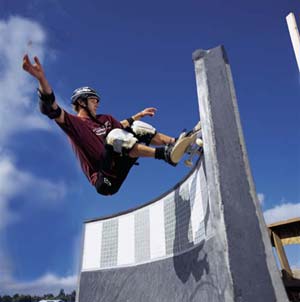 As you approach Airspeed Skateparks’latest project, in Eugene, Ore., you hear the sound of speeding skateboards as they glide over the slick surface of the concrete. The whir is occasionally punctuated by the chop of wheels biting into the surface after soaring high into the air. The 8,100-square-foot park invites wheels of all sizes: small “trick” bikes, rollerblades, and, of course, skateboards. No matter what the medium, the riders glide side-to-side, up and down, and pop up, floating momentarily.

The park’s builders, Geth Noble and Stephanie Mohler, have about 30 years of skateboard experience between them. At separate times, the two were irresistibly drawn to the building site of a community-sponsored skateboard park. Neither had previous experience pouring, shaping, or mixing concrete, but both put in many volunteer hours alongside different crews while learning the art of pouring and troweling dips, bowls, and drop-offs. After working hundreds of hours without pay, Noble and Mohler were hired on as part of a permanent crew.

Alongside the concrete crews (all of whom skated), they jumped into each project, helping develop thrilling new challenges. Noble, 37, and Mohler, 30, have collectively worked on about a dozen skateparks. A couple of years ago, they decided to form Airspeed. “What we do is a passion; we love it because we love skating,” says Mohler. “To me it’s the ultimate because it brings together physical labor, art, skateboarding, and community.” Depending on the project, Airspeed’s crew ranges from six to eight workers, all of whom are avid skaters. 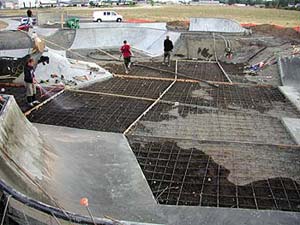 Parks usually range from 8,000 to 20,000 square feet. At nearly 30,000 square feet, the Chehalem Skate Park, in Newberg, Ore., is one of the most revered and visited parks in the Pacific Northwest. Thrasher Magazine rated the park — which Noble and Mohler helped build — an 11 out of a possible 10. According to the magazine, “Ten is just not loud enough.”

It’s all about motion
Plenty of people can work with concrete and make functional and aesthetically pleasing interior and exterior structures. A skatepark, however, is a different animal. In addition to having a sound structural plan and fresh features, a great park needs a crew that understands motion. Stephanie and Noble are adamant that to build a great park, the designer must be a skater and therefore, a potential user of the park. “You just have an intimate knowledge of how things should be, or could be. You have inspiration that an architect or someone outside of skateboarding could never have,” says Mohler.

“I wouldn’t be able to design if I didn’t skate. It’s all about speed and air,” says Noble, who last year received a design award sponsored by two skateboard organizations, the Concrete Disciples and the Skatepark Association of the United States of America. How do you incorporate speed in a design? “There are all sorts of ways to generate speed,” Noble says. “Shapes, both concave and convex, can pump the rider through or over. Steep and tall things will drop them down.” All the “speed lines” need to be lined up, he says. Some designers shoot these lines out of the park or into a straight wall, which breaks the momentum of the rider. Noble’s goal is to design lines that propel the skater gracefully through the park, giving them a ride that doesn’t require a push to stay in motion. This can be done, says Noble, if all lines “connect in a logical fashion.” 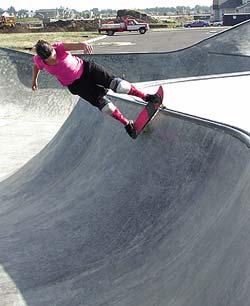 Motion manipulation
Because they have skated for so many years and continue to skate “most every day,” both Noble and Mohler find inspiration for new designs on a regular basis. To bring their inspiration to concrete reality, they use a 3-D modeling software program called Rhino. The program creates, edits, and analyzes a broad array of complex objects through its mathematical representation of 3-D geometry. This flexibility, when combined with Rhino’s high degree of accuracy, makes it possible to design, make prototypes, engineer, analyze, and manufacture an endless variety of shapes. Users can manipulate and experiment with a concept, working through problems and creating new ideas. Rhino is an especially good tool for free-form and organic shapes. Noble and Mohler says the program has pushed them to a new level in their design capabilities.

Airspeed Skateparks builds only its own designs and designs only for parks that it will build. Combining construction and design keeps Geth and Stephanie busy as they juggle building one park while planning the next one. Because there are various niches in skating — street skating, pool riding, skatepark riding, vert riding — Airspeed incorporates all aspects with each design.

A committee approach
The initial design serves as a template, representing the basic size and placement of the park. “The park evolves into what it is really going to be during the building process, says Stephanie.” It never stays like it is on paper — it always gets way better!” 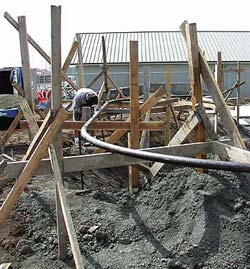 Typically, a public meeting is held with all interested users (for more info about skatepark building resources and community collaboration, visit skatepark.org). Requests for designs are heard and opinions are sought as to what people want the park to offer. “We listen to their ideas and desires and try to incorporate them into the design,” Mohler says. As lead designer, Noble likes to educate the park’s potential users on the very latest designs, rather than simply providing the same, common shapes that users know and may eventually find boring. Riders like “fly-outs,” places where they can launch out into the air. They also like rails. A “kink-to-vert,” an eight-foot radius pocket with a kink that shoots the rider up a four-foot vertical wall, is also popular. Airspeed likes to build new features every time.

The mix
The better the mix (the higher percentage of portland cement), the more durable the concrete. Cracks can’t be completely eliminated, but the good news is that deterioration can be repaired. As a preventative measure, Noble places flush joints about every 20 to 30 feet. If an area appears especially vulnerable to cracks, saw cuts can be used for control. The crews use a lot of retardant, about a two-hour set delay to give them time to manipulate the concrete. To make the park’s unique rounded and aerodynamic shapes, Noble fabricates tools out of fiberglass. He also uses tools designed for building swimming pools. After shaping and hard troweling, acrylic Cure & Seal is applied to give it a slow cure. 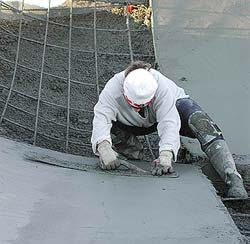 The ultimate park: Florence
Noble and Mohler have long dreamed of building a skate park in Florence, Ore., their hometown. Their dream will finally be realized this spring, when they are scheduled to start the project. This will be one to watch for. “We have all kinds of plans for it, top-secret structures that have never been built before,” says Noble. Sandblast etching, tile work, and after-finish staining will highlight Airspeed’s artistic talents. 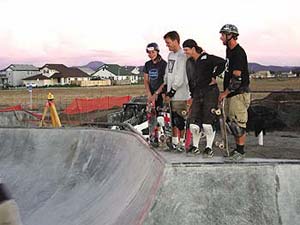 Fortunately, Florence has excellent resources for Airspeed’s vision, bringing a budget to the project that will aid in the creation of a world-class skatepark. This project will not only be an impressive example of concrete work, but if it reflects half the amount of enthusiasm that Noble and Mohler bring to it, it will be a whole lot of fun. 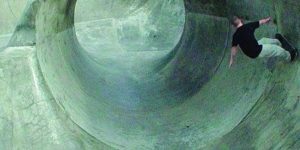 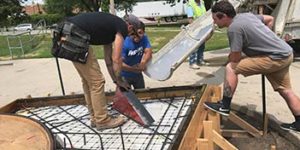 Not Just Another Skate in the Park